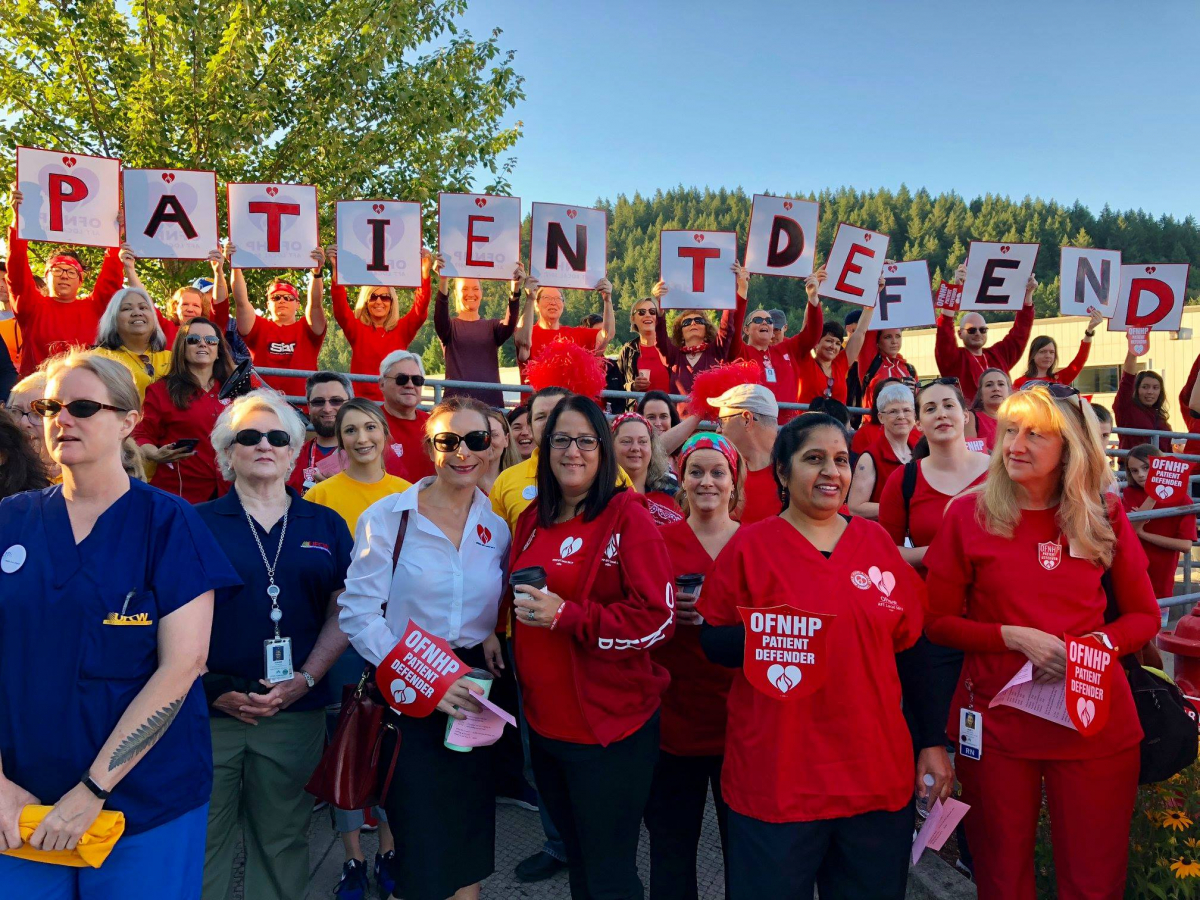 Kaiser Permanente, long touted as a model employer dedicated to labor-management partnership, is playing hardball in this year's bargaining. Meanwhile the longtime coalition of unions there has split into two camps. Photo: OFNHP.

Bargaining between health care giant Kaiser Permanente and a new union alliance representing 38,000 of its employees has come down to the wire.

The unions that split from the Coalition of Kaiser Permanente Unions this year to form the Alliance of Health Care Unions have emphasized their commitment to continuing a friendly partnership with the employer.

But Kaiser’s proposal to eliminate the defined-benefit pension for new hires, Enghouse said, would be a strike issue for OFNHP members.

“It would be the demise of our union,” she said. “Nope, we’re not falling for that.”

The company made sure the union knew it was preparing for a strike, she said, by advertising around the country for replacement nurses.

This aggressive behavior is coming from an employer that for years touted itself as a model employer dedicated to labor-management partnership.

The final scheduled bargaining session on September 17 turned into a marathon. When talks finally broke late on September 19, various of the local agreements had just been settled.

The national agreement, which includes all the major economics—wages, health care, and pension—was still unresolved. Bargaining was set to resume soon, with the September 30 deadline looming,

Kaiser operates hospitals and clinics in eight regions across the country, but especially concentrated in California. It also has a built-in insurance company.

When this year started, the bargaining was on track to be far bigger. The Coalition represented 107,000 workers from 33 locals, including affiliates of 11 international unions. The national agreement covering them all expires September 30. There are also local agreements, with staggered expiration dates.

But in March the Coalition reached its breaking point. The United Nurses Association of California, an AFSCME affiliate with 15,000 Kaiser members in Southern California, led the walkout.

When the dust settled, more than one-third of the Coalition had defected to form a new group, the Alliance. Pete DiCicco, an architect of the original Coalition, came out of retirement to lead the new group.

Its members include affiliates of AFSCME, the Teachers (AFT), the Teamsters, the Longshore Workers (ILWU), the Operating Engineers, the Food and Commercial Workers (UFCW), UNITE-HERE, and the Steelworkers, plus an independent union of nurse anesthetists.

Remaining in the old Coalition are 69,000 Kaiser workers, including 56,000 members of SEIU, plus the Office and Professional Employees (OPEIU) and the Professional and Technical Engineers (IFPTE).

The employer has put off bargaining with the Coalition unions until their local contracts expire next year. Kaiser may also be signaling that it will not sign a national deal or renew its partnership with them.

Meanwhile the Alliance signed a new partnership agreement that revises the ground rules for cooperation between the unions and management—agreeing among other things that no party will “engage in legislation or ballot initiatives which are specifically targeted at another member of the partnership.” This provision is aimed at SEIU-UHW; ballot initiatives are its go-to pressure tactic.

Despite the impending national expiration, SEIU Local 49 President Meg Niemi said that members’ wages and benefits are protected until the union gets to the bargaining table.

But she said Kaiser has unilaterally withdrawn letters of understanding, including a longstanding guarantee of double pay for mandatory overtime. The union has filed unfair labor practice charges.

Union leaders from both the Coalition and the Alliance say they’re committed to the longstanding partnership with Kaiser. So why the split? Depends who you ask.

The bottom line for Enghouse was that Dave Regan, president of SEIU-UHW—by far the largest Coalition union with 46,000 members—became impossible to work with.

She said Regan demanded to change voting rules so that big decisions could be made by unions representing 60 percent of Coalition members. That would mean “himself and two small locals could pass whatever he wanted,” she said.

She and other union leaders bristled at Regan’s bargaining strategy of filing and withdrawing ballot initiatives transparently aimed at Kaiser, instead of mobilizing members. The 2015 negotiations came and went with no visible worksite campaign by SEIU-UHW.

Niemi has a different take. “Kaiser would love it if we let this get personal,” she said about the criticisms of Regan. She believes the company “drove a wedge” between unions because it wants to force economic issues back down to local bargaining.

Despite their differences, SEIU Local 49 and OFNHP turned out to each other’s rallies and pickets this summer.

The Coalition wasn’t originally formed to go into partnership with the employer, DiCicco said. It was founded by unions “lining up for war.”

Kaiser was pushing concessions in its weakest bargaining units, then trying to roll them out elsewhere, provoking a series of strikes. So the unions got together and geared up for a unified corporate campaign. Then they presented an ultimatum—offering labor peace in exchange for a role in decisions. Kaiser accepted, and in 1997 the Labor-Management Partnership was born.

Day to day, the partnership functions through “unit-based teams.” Workers in each team elect a labor “co-lead,” who is paired up with a management co-lead, usually the department manager or supervisor. This pair develops the agenda for monthly meetings where workers help devise improvements on such topics as patient wait times or employee health.

The benefit for the employer is getting labor buy-in for changes the employer wants, said Cliff Pfenning, a Kaiser registration representative who serves on SEIU Local 49’s executive board. He compared it to a parent who wants a child to clean their room: “If you can make them believe it’s a good idea, they’re going to do it with a little bit of zest.”

But in recent years Kaiser has become more top-down, Pfenning said. In many departments, he said, the management partner writes the agenda, then tells the labor partner, “Here are the things we need to discuss in the meeting; here are the things we might need to push through.”

Niemi locates the problem higher up. She said management would like to focus the partnership on meeting its financial operating targets.

“Our premise has been that the unit-based team has to determine what they’re going to work on,” she said. “That’s the magic—that it’s not just implementation [of management’s goals].”

One crack in Kaiser’s commitment surfaced in 2015, when UFCW Local 400 filed a lawsuit alleging that the employer was refusing to arbitrate or even meet about 59 outstanding grievances.

But the union was tight-lipped about the suit, and the Coalition reached and ratified its 2015 contract on schedule.

Labor-management cooperation plans had a vogue in the ’90s. Among the concept’s most outspoken critics were Labor Notes’s Jane Slaughter and Mike Parker, who wrote books, organized workshops, and advised union activists on dealing with these schemes.

Their main message was, “Watch out—these programs will undermine union consciousness and therefore union strength at the workplace. Any power they appear to give workers will be fake.”

Could Kaiser be the exception? The case had promising elements, Parker wrote: a strong local union at its heart (at first SEIU Local 250, later merged into SEIU-UHW); a union critic to keep it honest, the California Nurses (CNA), which stayed resolutely outside the partnership; and a decent nonprofit employer that offered patients good care.

In coordinated bargaining the Coalition won industry-leading standards, including an education fund that enabled workers to retool for new careers.

Still, Parker concluded this partnership had the usual shortcomings. It became a self-perpetuating $16 million organization, undermining the union by diverting problem-solving away from collective action.

“Suppose instead that the unions had bargained that money for lost time and training for stewards!” he wrote.

A couple unions have stayed outside the partnership—CNA and the breakaway National Union of Healthcare Workers, formed in 2010 by leaders and activists from the old SEIU-UHW after the international union trusteed that local and put Regan in charge.

Kaiser’s relationship to the outsider unions has been contentious. Last time around, CNA and NUHW struck together before they got a deal, staving off a two-tier pension proposal.

This year, CNA has already reached an agreement—fighting off the two-tier pension again, this time without a strike. NUHW President Sal Rosselli said his union is deep in talks with Kaiser about working together to become “the model mental health employer in the country.”

“Fundamentally the partnership is in flux,” Niemi said. “For Kaiser to tout and say they have a great relationship with labor—walking away and refusing to bargain is not very partnership-like.”

Alexandra Bradbury is the editor of Labor Notes.al@labornotes.org
Related
Kaiser Strikers Insist You Should Be Able to Get an Appointment When You Need It »
Kaiser Clinicians Strike against ‘Separate and Unequal’ Mental Health Care »
Mike Parker: A Labor Educator with Impact »
Rest in Power Mike Parker, 1940-2022 »
Kaiser's Outrageous Two-Tier Wage Proposal May Provoke a Massive Strike »