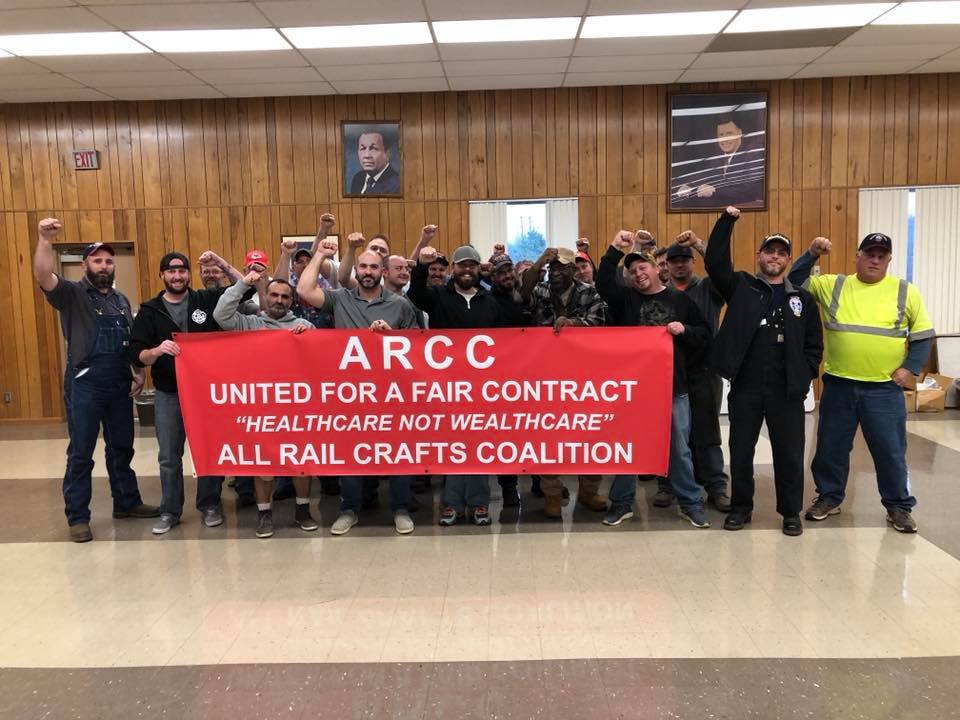 Railroad unions are at odds over a contract settlement that will set the pattern for 135,000 rail workers. But in Kansas City, members of several unions have formed an All Crafts Coalition to fight health care concessions. Photo: Matt Mortensen

After nearly three years of bargaining with the nation’s top freight carriers, railroad unions are at odds over a contract settlement that will set the pattern for 135,000 rail workers.

Three groups of rail unions sit at different bargaining tables. The largest is the Coordinated Bargaining Group (CBG), which covers 85,000 workers in six unions, led by Teamsters affiliate the Brotherhood of Locomotive Engineers and Trainmen (BLET) and the United Transportation Union, affiliated to SMART. This group reached a tentative agreement in October that it says preserves work rules and jobs and provides a healthy raise.

But members of another coalition, made up of the Brotherhood of Maintenance of Way Employees (another Teamsters affiliate) and SMART Mechanical, are furious over concessions on health care. For the past month BMWE members have been picketing the railroads to inform members of other crafts about the givebacks.

Collective bargaining agreements covering railroad workers have no expiration dates. That’s one of the many peculiarities of the Railway Labor Act, which governs the industry. Strikes or lockouts are legal only after protracted negotiations, including federal mediation. If the parties cannot reach a voluntary agreement, the White House appoints a Presidential Emergency Board to issue recommendations. Only then can the unions or employers engage in “self-help”—and even then, if workers strike, there’s always the danger that Congress will order them back to work.

One reason negotiations have taken so long is that both parties were awaiting the outcome of the presidential election. Now union officials are raising the specter that, if workers vote down the tentative agreement, a Trump-appointed Presidential Emergency Board could slash work rules and give the railroads whatever they want, even eliminating the railroad retirement system. Ballots are due back in most unions on November 30.

“I don’t like the agreement—it’s concessionary,” says Union Pacific locomotive engineer Ross Grooters, a legislative rep for BLET Division 778 in Des Moines. “But we’re led to believe that the alternative is much, much worse.” He hasn’t decided how he’ll vote. “I don’t know if as railroad labor we’re organized enough to take on this fight.”

On November 27, the American Train Dispatchers Association, one of the six CBG unions, became the first to ratify the agreement, with 62 percent voting in favor.

The BMWE, whose members build and maintain tracks and bridges, has been pushing hard against the agreement. “You play the game until the final whistle,” says President Freddie Simpson. “I haven’t heard one yet.”

In most of the rail unions, negotiations have consisted of union leaders sitting down with management with little member involvement. “Everybody in our local is pretty frustrated in seeing how this process works,” says locomotive mechanic Aaron Dixon, president of Machinists Local Lodge 27 in Kansas City. “It’s basically you get what you get, and that’s it. Most guys don’t know the last time there was an actual picket.” The last freight rail strike was in 1992.

Meanwhile the BMWE has involved its members in a public contract campaign with the slogan “Healthcare Not Wealthcare.” The union has trained 1,300 “frontline communicators”—members who update their co-workers on bargaining and mobilize for national actions such as a November 8 day of info picketing outside railyards.

“We surveyed our members, and they said health care was the top thing,” said Reese Saulter, a maintenance of way worker from Atlanta who came off the job in February to work full-time on this Communication Action Team. “We can’t make the sick pay more.”

The union has developed its own health care proposal for all union members on the railroads, which it says will save the employers $140 million annually without any increase in costs or decrease in benefits for workers. The savings come out of the pockets of insurance companies, by redrawing an outdated network map to shift members to whichever of the three vendor options is cheapest in their metro area. But the railroads—and leaders of the other rail unions—have refused to consider it.

Instead, the CBG deal would double deductibles and out-of-pocket maximums, though employees’ premium contributions would stay frozen at $228.89 a month.

Those health care increases will eat into the 9.8 percent wage increase over the four-year contract, hitting hardest for members of the BMWE, the second lowest-paid craft on the railroad. (Members of the Firemen and Oilers Union, an SEIU affiliate that’s part of the CBG, are the lowest paid.)

Saulter has a special-needs daughter, and he’s worried about what will happen if she gets sick for an extended period. “It’s a bankruptcy plan,” he said, “with all the co-pays, deductibles, and prescriptions on the back end.”

The railroads argue they need concessions to cope with the dramatic decline of coal, their largest revenue source. Coal accounted for 25 percent of freight rail carloads in 2009; today it’s 13 percent.

Yet the railroads remain among the country’s most profitable companies. Union Pacific, for example, netted $1.2 billion last quarter, a 22 percent profit margin. Mergers have created regional duopolies—CSX and Norfolk Southern in the East, and UP and BNSF out West—that raise their prices faster than inflation.

You Scratch My Back …

The Pennsylvania Federation of the BMWE has brought charges within the Teamsters against three top BLET leaders, including President Dennis Pierce, for taking money from health insurance companies during bargaining. Penn Fed General Chairman Jed Dodd is asking for an immediate investigation and a halt to the contract ratification vote until the allegations are resolved.

Eight top officers and staffers of the BLET received $17,039 in gifts from health insurance companies who administer rail workers’ plans between 2014 and 2016. The gifts included hockey tickets, golf games, and numerous expensive dinners. Officials from the other rail unions have received another
$66,000 in gifts since 2014 from these same health benefit providers.

“It is pretty obvious why CBG negotiators decided to extract the concessions from the membership instead of their ‘friends’ in the insurance industry,” Dodd wrote in the Penn Fed’s Appeal to Reason.

“If Union Pacific plateaued at $1.3 billion for the quarter, it would be doomsday—‘We didn’t make $1.4 billion, this is a downturn!’ This is what happens when you’re just accommodating the shareholders,” says Machinists Local Lodge 27 Chairman Will Young.

Even before reaching a tentative deal, CBG officials were condemning what they labeled “interference” by the BMWE. They have urged members not to attend the union’s contract campaign rallies over the past year, and they argue that maintenance of way workers don’t have the same stake in potential changes to work rules.

But some members of other crafts have been happy to hear from the BMWE. “People are thirsting for knowledge about what’s going on, and nobody’s telling them anything,” says Dixon. “We’re having to go to other unions.”

“We’ve been talking to all the crafts,” says Tom Modica, a BMWE member at Norfolk Southern in Chicago who’s also active in the cross-union solidarity group Railroad Workers United. He walks into breakrooms before or after work with an informational flyer or a “Healthcare Not Wealthcare” sticker.

Recently CBG leaders have switched tacks, reaching out to members in an effort to sell the deal. “We’ve been having town halls all through the negotiations,” Modica says. “They’re having the first one coming up. We’re forcing their hand—they’ve got to talk to their membership finally.”

Dixon, Young, and Street hooked up with other rail workers in Kansas City to form an All Crafts Coalition that had its first big activity in September, a rally against health care concessions outside Union Pacific’s family day. The next All Crafts meeting tripled in size—92 workers showed up.

These are small steps in an industry divided among 13 unions and three different bargaining tables. But rail workers recognize they’ve got a fight on their hands, in this round and the years ahead, to preserve jobs and standards in the industry, not to mention fight management’s increasingly draconian enforcement of rules.

“I’ve got another 30 years until I can retire,” says Modica. “That’s a long career of having to pay more for health care. If I’m going to get screwed, I might as well get screwed fighting.”

A version of this article appeared in Labor Notes # 465. Don't miss an issue, subscribe today.

Dan DiMaggio is assistant editor of Labor Notes.dan@labornotes.org
Related
Auto Workers Turn a Corner for Strike Pay and Democracy »
Recent Books of Note for Labor Activists »
St. Louis Boeing Plant Workers to Strike »
Every Boss Has a Weak Spot. Find and Use It. »
What Can Unions Do Now to Defend Abortion Rights? »