A Contract Campaign from Virtual to In Their Face 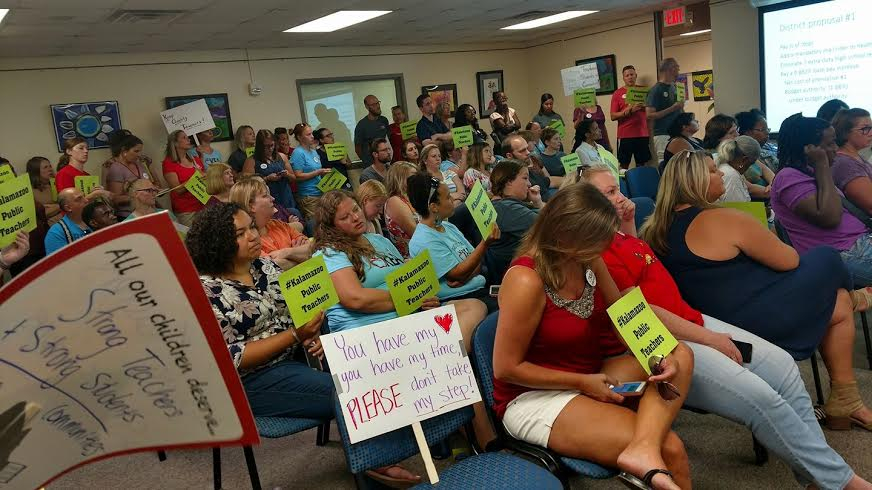 When confronted with a concessionary demand at the bargaining table, Kalamazoo teachers filled the room with rank-and-file members. They won their step increases.

When confronted with a concessionary demand at the bargaining table, what if you filled the room with rank-and-file members? What would happen?

Kalamazoo, Michigan, teachers received an urgent message in July from their union's private Facebook account for members: in bargaining, the district was demanding a pay freeze.

Within an hour teachers began to arrive at negotiations; soon they packed the room and turned the bargaining process on its head. All told, 46 members showed up at the union office on a beautiful summer day. The rapid response dramatically changed the course of bargaining.

“I saw a message on Facebook during my lunch break,” said special ed teacher Anthony Barnes, who was teaching summer school, “that the district was demanding a step freeze. As soon as school was done I rushed down to the union office to see what was going on.”

“We were blown away with the support we received,” said bargaining team member and kindergarten teacher Chris Kurtz. “The district looked like deer in headlights once they realized the room was filling up with members.”

When 800 Kalamazoo Public Schools teachers left for their much needed summer of rest and rejuvenation, they didn't know they'd be called to action to win a fair contract.

In a community that strongly supports public education, most members expected the school year would start with their usual 3 to 6 percent increase (known as a step increase), written into the contract structure decades ago. The district has refused to sign more than a one-year contract since the big state funding cut in 2011, but this is the first time the district's offer did not include step increases, nor any raise for the 300 teachers topped out or on multi-year plateau steps.

Step increases are not raises, the union argues. They are a reduction in the “discount” management gets for having newer teachers who hire in at lower pay.

But then came the news that the district was playing hardball on the steps. It was also threatening to force teachers to pay hundreds of dollars more per paycheck for their health insurance.

For the next month, till the wee hours of August 26, just before teachers were set to return to work, union and community allies mobilized to demand the district give teachers a fair contract. They demanded the administration provide step increases, address class size and excessive non-instructional duties, deal with the chronic substitute teacher shortage, prevent principals from undermining teachers' discipline, and make sure the district continued to pay its previous 80 percent share of health insurance.

All summer, the Kalamazoo Education Association had faced a school district refusing to bargain in good faith. The bargaining team had presented well-reasoned proposals developed from a membership survey, and the only response we got was “No” or “Current Language.”

When faced with surface bargaining, the team didn’t file an unfair labor practice, knowing it would take a long time to resolve. Instead, the team sent a strong message on Facebook and through email telling members the truth: “KPS Administration have lost their minds. Not only do they refuse to reduce class size, improve school safety and address the chronic lack of substitute teachers, they want you to take a salary freeze!”

While schools in other Michigan cities have faced plummeting enrollment, strained infrastructure, and declining resources, Kalamazoo is one of the economically healthiest school districts in the nation, as a result of enrollment growth and solid community support of local taxes for education. It has increasing enrollments each year, solid financial standing, and a college scholarship program, the Kalamazoo Promise, that garners national attention.

Because every graduating high school senior is guaranteed money to go to college, parents want their children in Kalamazoo schools. And local business celebrates the program. But the success of the Promise program depends heavily on recruiting and retaining high-quality teachers.

This summer, 10 percent of teachers decided to retire or leave, as the schools continue to be a challenging place to teach. Despite the advantages of being the “Promise District,” Kalamazoo teachers still face the problems that go with higher than average poverty and the nationwide speedup that is demanding more of teachers with fewer resources and less compensation.

Parents and community members became concerned that a salary freeze would exacerbate a growing shortage of teachers and threaten the high quality of education they had grown to expect.

At an August 3 meeting, the school board read a prepared statement saying it was not possible to meet the teachers’ demands. But then reality overcame them. Teachers had packed the board meeting to say that a step freeze was not acceptable. They carried #KalamazooPublicTeachers signs to link their online actions with their face to face with the school board.

Although the board had said it wouldn't budge, at the very next bargaining session it upped its offer, getting half way to the amount of money needed to pay for the step increase.

Two weeks later dozens of KEA members conducted an informational picket before another school board meeting, demanding their step increase. Inside the meeting parents and other community members invited by the union showed up in force. One speaker after another stood up for teachers and passionately spoke in favor of a fair contract.

“We are deeply grateful for the support that the community showed us in their messages to the board. My former student who spoke blew me away!” said English teacher Anne Lewis.

State laws passed in 2011 and 2012 have eroded teachers unions' rights by prohibiting bargaining about critical issues like teacher discipline, teacher evaluation, layoffs and recall, and how much the employer can pay for health insurance. A ban on retroactive payment after a contract is settled distorts the bargaining relationship and penalizes unions who want to hold out for more. But the lesson learned is that members and community working together can make a big difference in the kind of contracts we end up with.

On Monday morning, August 28, teachers reported for work and attended the annual starting “pep rally” for all district employees, held at Western Michigan University. Hundreds of teachers dressed in black marched into the auditorium together to send a strong message of unity.

“The District was given the legal right to use strong-arm tactics, but it does not mean it was the right thing to do to their employees, their community members, and the teachers of their children,” said Heather Reid, a social studies teacher. “We deserve to be treated with dignity and respect. Until then, our crisis plan remains in place.”

On August 30 members ratified a contract that guarantees this year’s step increase and protects health benefits. It gives the union new tools to deal with the substitute teacher shortage, principals undermining teacher discipline of students, and other priorities.

Social media contract campaigns are great, but you have to transform the virtual to reality and get in the employer’s face.

Dave Staiger is a Michigan Education Association member who recently retired from the Kalamazoo Public Schools.