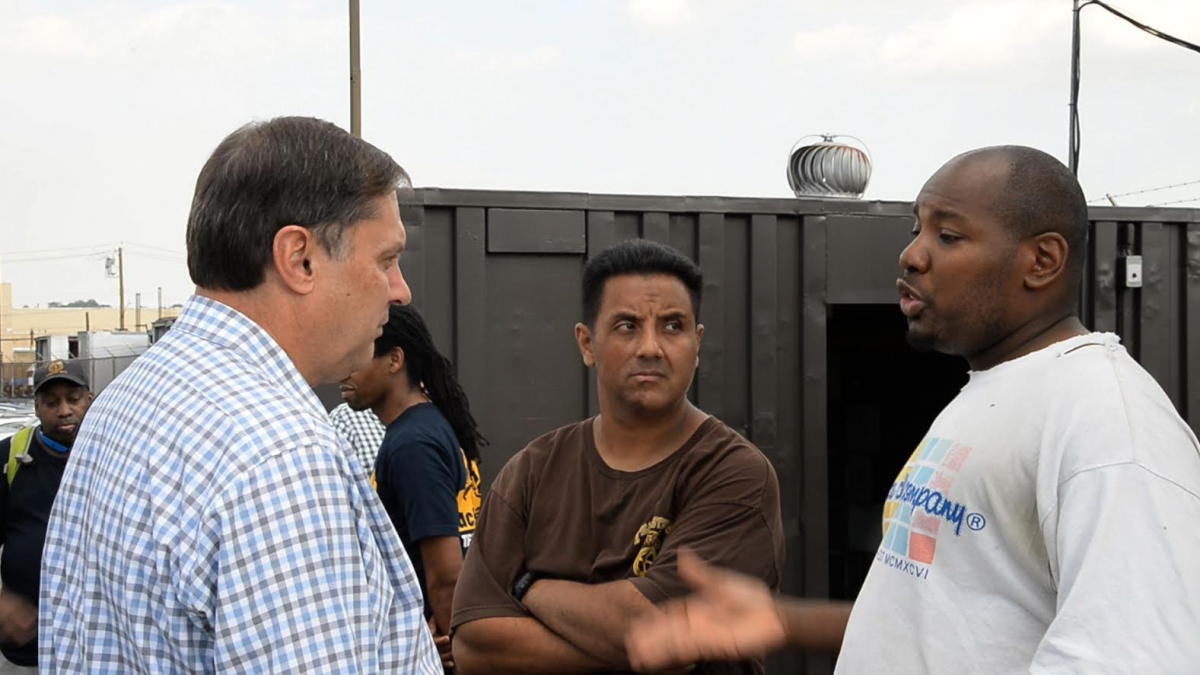 Reformers won seats on the Teamsters’ international executive board and came within a hair’s breadth of unseating the incumbent administration. Rank-and-file volunteers won over their fellow Teamsters in thousands of one-on-one conversations in workplace parking lots around the country. Photo: Teamsters United

For the first time in nearly two decades, reformers have won seats on the Teamsters’ international executive board—and come within a hair’s breadth of unseating the incumbent administration led by President James P. Hoffa.

The Teamsters United coalition slate, headed by Local 89 President Fred Zuckerman and backed by the longtime reform group Teamsters for a Democratic Union, contested all 12 at-large seats and nine of the 15 regional seats. They ran on a platform of refusing concessions, reviving contract enforcement, defending pensions, rooting out corruption, and organizing in the union’s core industries.

The challengers scored 49 percent of the vote. A swing of about 3,000 votes would have put new leaders in charge of the union.

“Now members are aware that Hoffa can be beat,” said Frank Villa, a 26-year Teamster who works in the grocery industry in Southern California. “I’d love to have won, but this is far from over.”

Thanks to reformers’ efforts in earlier years, the union constitution guarantees Teamsters the right to elect their top officers directly, every five years. Out of 1.3 million eligible voters, about 214,000 voted in the month-long mail-ballot election.

Results were tallied November 14-17. Voters could choose a candidate for each contested seat, but almost all voted by slate. Teamsters United won outright in the South (with 57 percent) and Central (59 percent) regions, picking up all six vice president seats in those areas.

Though 95 percent of local presidents backed Hoffa, Zuckerman won the vote in 176 of the union’s 370 locals—including a number of powerful ones. The reformers expanded their reach beyond traditional strongholds like freight and carhaul to win in rail and airlines too.

In fact, after the whole U.S. vote was counted, reformers had the lead. But the needle moved in Hoffa’s favor after the Canadian votes were added. Turnout in Canada was far lower, but just 23 percent chose the challengers.

“This close an election, it changes things,” said Jerry Yarbrough, a 28-year freight Teamster in Memphis who ran for at-large vice president. “They know that they’ve got to do something different; they’ve got to show us some respect. It can’t be business as usual.”

Teamsters United rode a wave of anger over pension cuts and concessions in the union’s national contracts.

UPS workers make up 20 percent of the union’s membership. In 2013, rank-and-file UPSers held up the national contract by voting down most of its local supplements. Members were angry at the deal’s givebacks, especially an increase in out-of-pocket health care costs, at a time when UPS was hauling in profits of nearly $5 billion a year.

After members repeatedly rejected three regional supplements, Hoffa finally resorted to imposing the concessions. Members in those areas repaid him big-time this election, and Teamsters United won among the 250,000 UPSers. Bargaining for the next contract begins in 2017.

Meanwhile carhaulers, who transport new cars from auto plants and railyards to dealerships, have twice voted down a national deal that would cut wages and give companies nearly free rein to outsource work. Teamsters United has been pushing to replace Hoffa’s bargaining team with officers from the biggest carhaul locals—including some of the newly elected Central region vice presidents.

The business newspaper The Journal of Commerce reported that employers who had dealt with Hoffa were “likely relieved” to see him reelected, since the incumbents have handed them wage and benefit concessions.

On the heels of Donald Trump’s upset win in the U.S. presidential election, many of the same Rust Belt areas that swung Trump’s way turned out for Teamsters United. The challengers won majorities in Ohio, Wisconsin, and Pennsylvania, and across the Midwest and South.

“There was a big anti-incumbent feeling,” said UPS worker Nick Perry. In his union, Local 413 of Columbus, Ohio, the vote for Teamsters United was a staggering 1,044 to 38.

The coalition mattered, too. The last Teamsters election was a three-way race, with a 41 percent total opposition vote split between TDU-backed Sandy Pope and the slate that Zuckerman ran on. But Zuckerman and his allies later teamed up with TDU to fight the concessionary contracts. That laid the basis for the Teamsters United slate.

The challengers also pointed to widening investigations of alleged corruption among the union’s top officers. The Hoffa administration managed to stall proceedings for months, with the most explosive news coming in the final days before the vote count.

The majority of the ballots were already in by October 31, the day the union’s federally mandated Independent Investigations Officer recommended charges against Secretary-Treasurer Ken Hall, who until recently seemed to be 75-year-old Hoffa’s heir apparent. Hall was charged with obstructing a corruption investigation by destroying thousands of documents and emails.

Charges against other top officials followed. Hoffa’s Executive Assistant Willie Smith allegedly took an illegal gift from an employer in the form of tickets to a Playboy party at the Super Bowl. International Vice President Rome Aloise allegedly bargained contract concessions in exchange for lining up those tickets for Smith, among other charges. Former Political Director Nicole Brener-Schmitz is charged with embezzling union funds.

Hoffa himself isn’t facing charges at this point, but the investigations officer is now looking into his role in a scheme that awarded a lucrative benefits fund contract to an investment broker who flew him and other top officers around the world on a private jet and treated them to European golf vacations.

“I believe if this information about the corruption had come out earlier, we’d be in office now,” Yarbrough said.

That point is the basis for Teamster United’s election protest demanding a rerun. The reformers charge that the Hoffa administration illegally used union resources to delay the investigations until after members had voted.

Teamsters United also alleges a range of activities by employers and union officials to impede their effort and favor the Hoffa-Hall campaign, including surveillance, refusing to provide worksite and email lists, denying parking lot access, and even firing supporters.

This campaign was two years in the making, kicking off in early 2015. Supporters spent that summer gathering signatures on the petition to get the slate accredited.

Some, like Philadelphia UPS driver Joan-Elaine Miller, donated vacation time to the effort. “It was a blast,” she laughed at the time. “Living in my car, eating Reese’s Cups and drinking Wawa coffee and setting my alarm for 3 a.m. That’s how I spent my summer vacation!” The campaign turned in a record 63,000 signatures—more than double the number required.

The next hurdle was recruiting enough people to challenge their local officers in elections for convention delegate seats, so that the slate could meet the 5 percent threshold of delegate votes to nominate candidates at the union’s June 2016 convention. Local officers commonly run unopposed for the junket to Las Vegas.

But the main task for activists over the past two years has been talking to their fellow Teamsters, often by leafleting at workplace gates. Since most members sit out the election every five years, the election is won or lost on turnout.

Teamsters United supporters found people receptive to their message nearly everywhere they went. The key was talking to enough people—and getting their phone numbers in order to remind them to vote.

Activists coordinated their efforts by area, donating vacation time to hit the road and get the word out at big worksites. Teamsters from Rhode Island traveled all over New England; Teamsters from Texas and Tennessee traveled throughout the South.

The results are evident in the final tally—in the locals that got visits, turnout was higher and favored Teamsters United. In locals where turnout exceeded 25 percent, Zuckerman won 62 percent of the vote. Hoffa won where participation was 15 percent or less, relying on the least-informed members.

In Ohio, Perry said, “we did so much better this time because we actually had people everywhere. Instead of going blind into Toledo and telling people to vote, we had local union stewards with us, and that made a big difference.”

A well-organized committee in Chicago dispatched volunteers for months in teams of two to 20, depending on the size of the worksite. They achieved what had seemed impossible, flipping the longtime Hoffa stronghold to a majority vote for Teamsters United. Chicago Joint Council head John Coli was among the Central region vice presidents ousted.

Though the campaign lost in the West, where fewer members work under national contracts, Villa was encouraged by progress there too. Teamsters United won in Locals 396 and 63, both headed by power players in the international union. He believes the new coalition will last. “Our principles are the same, and working together we got to understand each other,” he said.

If Teamsters United’s bid for a rerun fails, the next election will be in 2021. Meanwhile there's plenty of organizing for the coalition to jump into, starting with contract campaigns as all the national contracts open up again.

"We’re not looking for any more concessions," Yarbrough said. "We’re going to take a stand. We want what we’re due."

A version of this article appeared in Labor Notes # 454, January 2017. Don't miss an issue, subscribe today.