How to Make Union Meetings Interesting and Useful 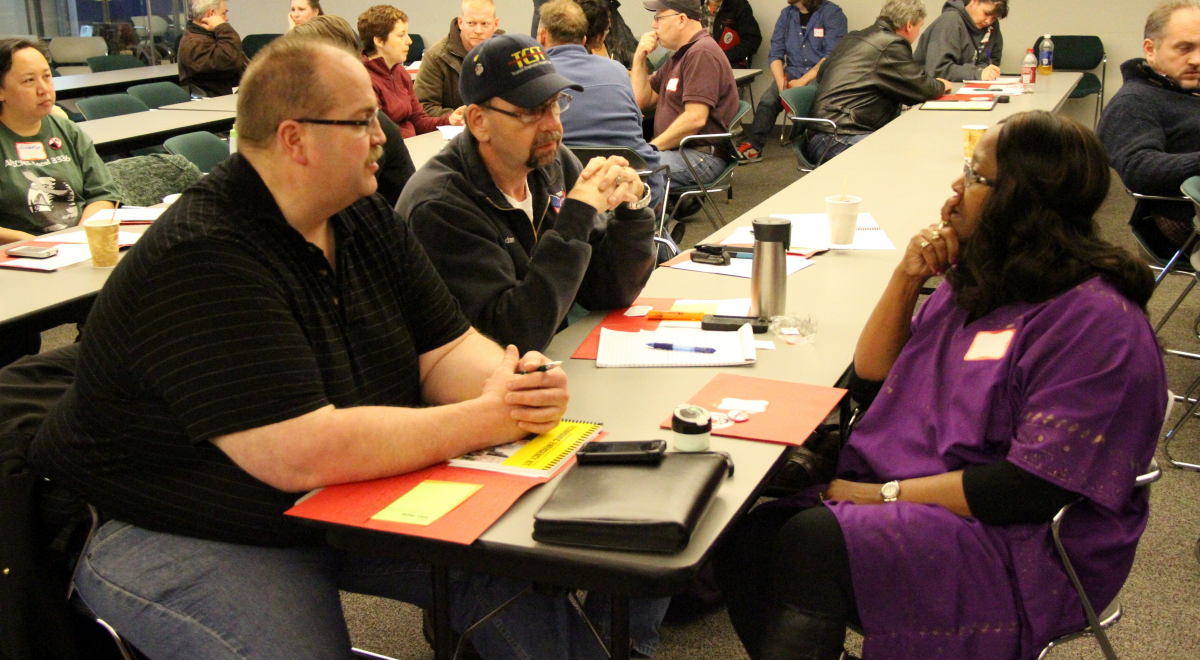 Meetings should give members a sense of power by bringing them together. Start with the agenda—get rid of boring reports, and replace them with hot issues that affect members at work. Photo: Peter Parks.

This article is an excerpt from the book Democracy Is Power: Rebuilding Unions from the Bottom Up, available for $10.

Membership meetings are not simply places for members to get information and cast votes, which could also be accomplished through newsletters and mail referendums.

If this doesn’t sound like a union meeting you’ve ever been to, it’s because most locals are unwittingly stuck in traditions that almost guarantee that a first-time attendee will not come back, and only the most faithful will persevere.

Although many officers fret about low attendance levels, it is not necessary for democracy that all or most members attend membership meetings. Except at contract time and for other special events, most locals will see only a relatively small, dedicated minority at monthly meetings. Meetings, especially on a regular basis, are not for everyone. Read more in Democracy Is Power: Rebuilding Unions from the Bottom Up, a handbook for developing a member-run union, $10.

Are you a local officer who wants to lead productive, engaging meetings? See the section on “Leading a Membership Meeting” for tips on how to prioritize agenda items and how to be a good chair, including exercises to help you think through common problems that may arise.

Are you a rank and filer facing an undemocratic administration? See “Being Effective at Union Meetings” for advice on how to use monthly meetings, including choosing your goals, organizing your support ahead of time, and navigating parliamentary rules.

But union meetings can be the chief organizing vehicle for that portion of the membership that takes union work most seriously—the activists. Coming to the monthly meeting is often one of the first things that a member tries when he’s seeking to be more involved. It’s important not to turn them off!

That means that the success of a meeting is not measured simply by the number attending, but by how that meeting contributes to the control, involvement, activism, and self-confidence of all the members, both those present and those not. What “comes out of” the meeting—the plans made, assignments taken, feedback received—are more important than the meeting itself.

PERK UP THE AGENDA

To improve meetings and boost attendance, start by doing away with the standard meeting announcement that sets out the same uninformative agenda month after month:

Tell members instead what will actually come up at the meeting. Make sure they know how to propose agenda points covering their concerns. Distribute proposed motions in advance.

Put important and controversial items on the agenda. Discuss issues that will directly affect work situations. Have votes on policy questions where the vote really makes a difference.

Get rid of the boring reports. Print them out and distribute them in advance. Do them in multiple languages if appropriate, so members can come to meetings prepared.

Once we get over thinking that every member should attend regularly, then we can specialize some meetings. Plan each meeting to focus on a different section of the membership. Invite a few of those members to make a presentation on specific problems they’re facing.

Advertise that the January meeting, for example, will take up the question of repetitive strain injuries in the wrapping department, and recruit shop floor leaders and RSI victims to give presentations. February will focus on the problem of a particular supervisor in inspection. Treated this way, soon members will be clamoring to get their points on the agenda.

Another possibility is to move the location of the meetings around to make them more convenient to different segments of the membership.

Use some imagination. Bring in outside speakers for brief talks and discussion. Use video clips. Give people—especially volunteers—recognition for what they have accomplished for the union.

Break down into small groups on occasion to get more people participating. Have members do skits or role-playing to deal with challenges facing the union.

For example, management wants to bring in summer temporaries. Some members are pleased because their kids can get the jobs; others want to make management stick to the contractual hiring procedures. Most of the people at the meeting, because they think about the contract more than other members do, are in the latter camp.

Rather than just discussing how to make management toe the line, get two members to come up front, play the roles of union members with different viewpoints, and argue it out. Use the insights gained to plan a strategy.

Always have a point on the agenda called “members’ concerns,” where anyone can raise a problem or question without necessarily making a motion. In this portion the officers listen, make notes, and after the meeting see that some action or investigation begins. Not only do they report back to the person who has brought the concern, they also report back to the next union meeting.

Make sure several people are assigned to help any new members or first-timers understand the meeting procedures and help them accomplish what they came to the meeting for. Sit with them and explain what is going on. If a person uses procedure incorrectly, figure out his intent and help him through it.

The chairperson should go out of her way to make the newcomers comfortable, give them recognition when possible, and draw them further into participation.

Invite spouses to the meetings as full participants (except for voting). Have good quality childcare so that the kids look forward to the meeting as well as the adults.

One technique we do not recommend is door prizes or lottery tickets to boost meeting attendance. It cheapens the purpose of the meeting and stresses seeing things in terms of “what’s in it for me individually” rather than coming together to help all of us.

On the other hand, Teamsters Local 174 in Seattle used a financial incentive to break the ice with new part-time UPS workers. Those who came to an introductory meeting were refunded their initiation fee. Union leaders thought the one-time appeal to self-interest was worth it, to make sure some of these young, high-turnover workers learned firsthand about the local’s philosophy and how to get to the union hall.

At the end of the meeting it is sometimes useful to have a brief point on evaluation—what could be improved? Keep the meetings short so they don’t dribble to a close as people drift out; leave time for informal discussion and socializing afterward.

Remember that the meeting is only one piece of the union’s life; most members relate to the union outside of meetings. If the union meeting in essence consists of the various levels of leaders—elected people and rank and file activists—then the next job is to figure out how to provide two-way information between the leaders who come to meetings and the bulk of the members in the workplace. A strong and democratic union exists primarily as a force in the workplace, not at the union hall.

That’s why every meeting should be an action meeting that leads to some other activity. Members and leaders should take assignments at the meeting, and these should be summed up at the end: “The president will check into x and report back to y body. John has volunteered to help the education committee put out a leaflet on xyz problem by x date. Everyone here in the abc department will take the group grievances and get them signed.”

Assignments should lead the work of the union back into the workplace where more members can be involved, not just to the next union meeting or committee meeting.

Mike Parker and Martha Gruelle are the co-authors of Democracy Is Power: Rebuilding Unions from the Bottom Up. Got tips on running a meeting? Email them to dan[at]labornotes[dot]org

Related
UFCW Reformers Look to 2023 »
Ballots Are Out in UAW Election, with Contrasting Visions of Unionism Up for Leadership »
Employers' Productivity Standards Are Not Real Science. Here's How to Push Back »
Rank-and-File Power Is Essential to Rebuilding the Labor Movement »
Auto Workers Turn a Corner for Strike Pay and Democracy »