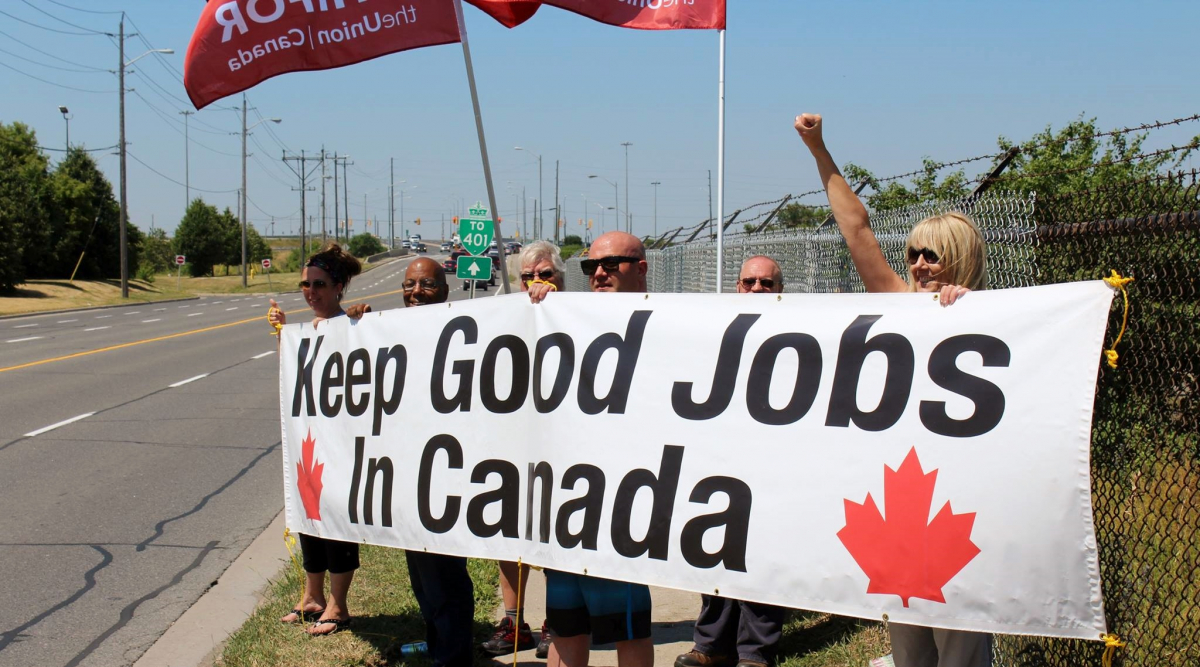 There are no precedents for unions enforcing investment “commitments” from automakers. Making investment the main demand almost invites the company to ignore other issues and continue its two-tier structure. Photo: GM Oshawa Matters

Ever since the sit-down strikes of the 1930s, the cycle of Big Three auto bargaining has been a major economic and political event, an indicator of the progress of working class power in North America.

Such interest has sagged lately—but it charged back into the news when Unifor President Jerry Dias declared that winning new investments for Canada is at the top of the union’s agenda in its bargaining with General Motors, Ford, and Chrysler.

This was an aggressive challenge to management’s right to unilaterally decide investments. And Dias followed it up with the warning: if these U.S.-based corporations don’t deliver a fair share to Canada, they can expect a strike.

On September 5, GM of Canada was chosen as the strike target. This means any settlement made at GM will be applied as the basis for bargaining with the other two companies. If there’s no agreement, a strike will begin on September 19, the contract deadline.

The company insists that it will not address the issue of investment until the contract is settled. Along with the other auto companies, it keeps repeating its demand that the union lower costs in order to “remain competitive.”

Unifor, the result of a 2013 merger between the Canadian Auto Workers (CAW) and the Communications, Energy and Paperworkers, represents more than 23,000 employees working for the Detroit 3.

GM employs about 4,000 workers in Canada—roughly 2,500 in its flagship facility in Oshawa, 1,500 in St. Catharines, and a small number at a parts depot in Woodstock, Ontario.

After the Canadian government bailed out the bankruptcies at GM and Chrysler in 2009—to the tune of $10.8 billion to GM alone—it received commitments from all three automakers to maintain a given level of production in Canada.

But since then, there’s been a steady reduction in their Canadian investment. Meanwhile, sales and profits have risen dramatically, and investment has increased in the U.S. and Mexico.

GM Oshawa has seen a huge drop in jobs. It may be on the brink of losing future product.

GM shut down its truck plant in 2009. Last year it moved Camaro production to Lansing, Michigan, costing 1,000 Canadian jobs. Assembly of the Chevy Equinox is scheduled to stop in 2017. Three other vehicles, currently being built on the plant’s high-tech “flex” line, are expected to go out of production in a couple of years.

The company is refusing to commit to any further product line beyond 2019.

CAN THEY DO THAT?

Making new investment the main contract demand has its pros and cons. Dias and the leaders of Local 222 argue that, without new investment and a commitment to jobs, tens of thousands more jobs will be lost locally and across the province and country.

GM might be forced to invest by the threat of a strike, which could affect the production of key components produced at St. Catharines for the high-demand Equinox, assembled at the GM-owned CAMI plant in Ingersoll, Ontario, and V-8 engines used in two of its best-sellers, the Chevy Silverado pickup and the Chevrolet Camaro, assembled in the U.S.

The Oshawa facility symbolizes auto production in Canada. It’s the source of $1 billion in federal and provincial tax revenues. So, banking on the good will of the new Liberal government, the union is trying to use its influence to pressure the federal government to extract major investment commitments from GM (and the other companies).

On the other hand, critics such as Sam Gindin, former assistant to the president of the CAW, and I argue that there are no precedents for unions enforcing investment “commitments” from automakers. It’s easy for the companies to go back on these promises later, since they write in loopholes for “market conditions” or competitive concerns.

Making investment the main demand almost invites the company to ignore other issues and continue its two-tier structure, with its 10-year grow-in, leaving all new hires with lower wages and compromised, “blended” pensions.

The 10-year grow-in was presented by union leaders in 2012 as a rejection of two-tier—in comparison to the open-ended two-tier structure in the U.S. Last year’s Chrysler rebellion against two-tier ended up introducing a grow-in plan to U.S. auto plants too.

In reality, there are not just two tiers, but a multi-tiered workforce. Supplemental Workforce Employees (SWEs) and Temporary Part Time workers (TPTs) make up even lower tiers. In St Catherines, there are others.

There is also talk in the union of giving up defined-benefit pensions for new hires.

The Auto Workers (UAW) in the U.S. have a sorry history of contracts featuring “job security.” Each year, a new set of concessions was supposed to guarantee competitiveness and jobs. There were a series of schemes to allow laid-off workers transfer to jobs across the country.

Rather than creating or protecting jobs, these contracts produced an ongoing acceptance of concessions—and a dramatic 89 percent reduction in the number of U.S. jobs at GM since 1978.

Pressure for new investment needs to come not at the bargaining table but through sustained, broad political action by the union and the labor movement as a whole. If the union ignores the critical issue of inequality in the workplace, it can only undermine its own capacity to fight back in the short run—and survive in the long run.

It’s not even clear whether the pressure on the federal government is really about investment or whether it’s about demanding more subsidies for the corporation. Over the past few decades, the pressure has been over subsidies. Today, given this government’s commitment to free trade, tactics like tariffs are made to sound outlandish—so it’s not clear what form that pressure would take.

MOOD OF THE WORKERS

The mood on the shop floor isn’t encouraging. People are afraid of losing their jobs and the future of the Oshawa plants.

Many workers have put their concerns about fighting the two-tier, 10-year “grow-in” on the back burner. For now, they’re more worried about investment. Many SWEs just want to become direct hires, integrated into the full-seniority track.

These are legitimate concerns. The problem is that there’s been no leadership from the national or local unions over the past years to build workers’ confidence that GM can be pressured to invest—without concessions.

And until very recently, there’s been no ongoing campaign against inequality in the workplace. People set their sights higher when they start to believe in their own power, because they’ve experienced collective resistance. With few such experiences under their belts, what would inspire workers to hope or expect that they could end two-tier?

On the other hand, the local union in Oshawa launched a campaign on June 21 to build support in the local community and among members to demand that the government pressure GM to invest and address some of the workplace inequality issues (such as bringing SWE’s into the seniority stream). But the call for new investment overwhelmingly dominates message being put forward by Local 222.

How effective this campaign will be, or how widely supported across the larger union, is not clear. It can’t succeed if it’s limited to Oshawa. It would require organizing information and education sessions across the union as a whole and in communities across the province. It would also need to build on the anger and resentment that so many working people feel towards inequality and the greed of large corporations such as GM.

There are some historical examples of the union challenging GM. In 1996, the CAW built a province-wide campaign against GM’s outsourcing of a number of different jobs.

The workers went on strike. They found support across the country, building on the common experience of job loss when the corporations shipped their jobs to lower-wage employers. The campaign culminated in a plant occupation that unified the local and the union.

They won. Out of this struggle came contract language for the principal of “job ownership,” contractual limitations on outsourcing jobs to lower-cost suppliers. But that kind of campaign and struggle have been missing for the past 20 years.

A relatively small group of SWEs and seniority workers in Oshawa and a group of SWEs in St. Catharines is fighting to make challenging the multi-tier system a central demand.

In Oshawa, before the contract demand meetings, the group produced leaflets about the necessity of ending the entire tier system. Members are working to produce materials featuring past struggles against workplace inequality in the CAW and across the labor movement.

In St. Catharines, a group of SWEs made, wore, and circulated T-shirts in the plant and the community against the tier system, and produced a post on the union local’s Facebook page: “If GM can afford to increase the CEO’s pay by 72 percent to $28 million, they can afford to end the discriminatory treatment of these workers who do the same jobs as other workers.”

The September 19 deadline is approaching, and there hasn’t been much evidence of a larger campaign—in the community, in the workplace, or especially, by the national union across the province—either to pressure the company to invest or to end the unequal tier system.

The possible outcomes include:

It’s possible that the corporation has already made plans to invest, and by unveiling them at the deadline, will make Unifor look like the hero, and avoid a strike. We shall see.