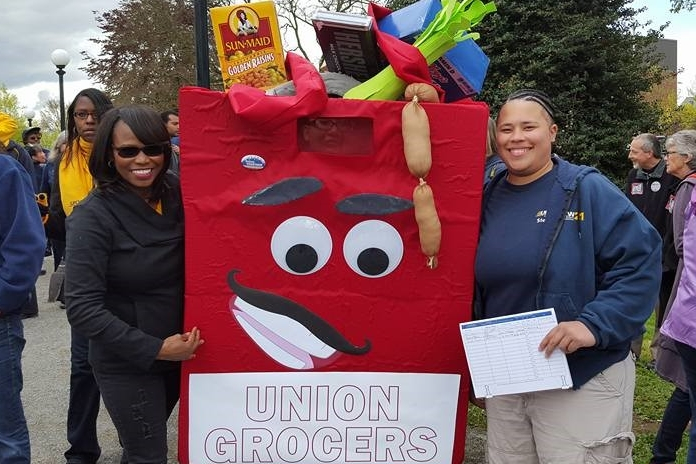 As grocery industry standards erode, UFCW Local 21 is bucking the trend, building power through activism at work and alliances in the community. Photo: UFCW Local 21

Corporate grocery chains are continuing their offensive, with Kroger the latest example. The company wants concessions, even though it plainly doesn’t need them—it’s making record profits and just gave its CEO a handsome raise. Store workers in Virginia, Tennessee, and West Virginia voted in May to authorize a strike after Kroger made them a final offer that featured meager raises, no paid sick days, and an end to retiree health coverage.

But as industry standards erode, one local is bucking the trend. In Washington state, members of Food and Commercial Workers Local 21 in April ratified a contract with the region’s biggest grocery chains that protects health care premiums, raises wages, boosts the employers’ contribution to their pension, improves transfer rights, and expands union leave time. And they did it without a strike, settling even before their old contract expired.

What’s Seattle’s secret? Why weren’t the grocery chains looking for a fight this year with the country’s largest UFCW local?

The answer lies in the years Local 21 members have put into steadily building power, through activism at work and alliances in the community.

MADE THE BOSS BLINK

Last time around, the chains did demand big concessions—and got a taste of the fight Local 21 could muster.

Albertsons, Fred Meyer, QFC, and Safeway pushed in 2013 for across-the-board wage freezes, even for workers with steps remaining on the pay scale. They wanted to dump thousands of part-timers off the health insurance plan and raise premiums, deductibles, and out-of-pocket costs for everyone else.

“Those negotiations were actually pretty scary,” said Ariana Davis, a Local 21 executive board member who’s been working at Safeway for almost a decade. “The employer said that because of Obamacare we don’t deserve to have insurance. They tried to take away our holiday pay, our sick time—everything that we had won over the years.”

After members authorized a strike, the union erected a massive clock in downtown Seattle, counting down the hours until the strike deadline, and workers showed they were prepared to follow through.

In every store, picket captains volunteered and got trained up. “We literally had picket schedules done, people signed up and ready to go, before we even took the strike vote,” said shop steward and picket captain Jeannette Randall. “I felt like a manager trying to write a schedule. We had people signing up for shifts on a form we posted in our breakroom, so management could see it.”

Stewards and captains drove to work each day with their cars conspicuously packed full of picket signs. Community allies rallied with members at the clock. And as the deadline neared, stewards organized their co-workers by shift to make a big show of cleaning out their lockers together.

“What made the clock powerful was that it was real,” said Communications Director Tom Geiger. “It wasn’t just some sort of a media stunt … You can come up with a creative idea, but you have to do a lot of on-the-ground, hard work to make those tactics successful.”

The companies blinked, backing off their concession demands and settling a tentative agreement with under two hours left on the clock.

“We used to have these trainings that were dog-and-pony shows, but they didn’t build power,” says Food and Commercial Workers (UFCW)Local 23 President Tony Helfer. “I was looking for ideas of what makes sense for a progressive local union, and I soon got tuned into Local 21.”

Helfer was a shop steward at Kroger before he got elected president of his local, representing 12,000 workers in Pennsylvania. “My staff had been involved in what I call ‘business model unionism,’ or managing our decline,” he said. “We were into servicing members and handling grievances.”

The trouble with that approach, he says, is that “grievances aren’t what 95 percent of the members need, and aren’t going to grow the labor movement. We are wanting to change minds and win hearts. That requires relationships.”

One goal local leaders identified was to connect with newly hired grocery workers.

“We don’t want anyone to ever say, ‘All I know about the union is that they are taking my money,’” said Tina Schreckengost, a shop steward at the Giant Eagle chain.

So Local 23 formed Welcoming Committees. In her store, Schreckengost and two other committee members organize regular opportunities for their co-workers to meet new hires.

“First of all, we introduce ourselves,” she said. “We make sure they are aware that it is a union shop. We provide them with union contracts and schedules with the dates of union meetings. We hand out buttons with ‘UFCW Local 23’ on it.

“We make sure they feel welcome to the union. I let them know that, while they are on company probation, that doesn’t mean that they can’t come to me if they have questions or need anything.”

Since each store has 80 to 200 workers on multiple shifts, it would be impossible for a single steward to stay in touch with every union member.

So Schreckengost and her colleagues have mapped their store, a technique they learned at a steward training. They created a list of workers in each department, and brainstormed which were leaders.

“We tried to keep an eye out on who was the one at the lunch table that had a lot of people talking to them or stopping by,” Shreckengost said. “They are the ones that are more likely to communicate with everyone.

“Once we identify key people in all the locations, we stay in tight contact with them, to make sure that we can spread the word.”

But Local 21 didn’t fall into the trap of stalling out after the 2013 contract was ratified.

Contract Action Team meetings, begun during negotiations, never stopped. These monthly meetings bring together activists in the same geographic area—who may come from different stores, employers, or even industries. (A third of Local 21’s members work in health care.)

The meetings are held in libraries and community centers, repeating in three shifts to accommodate every work schedule. Union activists get short skills trainings and union updates they can take back to their worksites.

Recognizing that, for many members, the union lives or dies on the shop floor, the local puts resources and staff time into making sure its stewards are more than just names on paper.

The union’s goal is one steward for every 10 members, covering every shift, department, and day of the week. That means 4,600 stewards—and it’s a work in progress. So far Local 21 has trained 1,000 stewards since it was chartered through a series of union mergers in 2005.

“We have almost 10 times as many stewards as we had 10 years ago,” said Crosby, “but we still have a long way to go.”

Steward activities often dovetail with contract campaigns, as in 2013 when Safeway stewards coordinated a statewide “Break Away Day.” Volunteer “break monitors” helped members record their start and end times and when, or whether, they had gotten breaks. After documenting widespread violations, monitors and stewards confronted management together. The action helped win better contract language on breaks.

Local leaders believe members’ sustained activism is what convinced the grocery companies to take such a different approach this year. “We were gearing up for a contract fight this time, and we were shocked when the company didn’t come back to the table with crappy proposals,” Randall said. “We showed them we were a force to be reckoned with.”

The local has a community organizing department, which awards small grants to independent groups with aligned values. UFCW staff members also serve on the boards of community organizations, and the local has mobilized members for issues important to its long-term partners, such as immigration reform and climate change.

In turn, these community organizations support Local 21. After settling its biggest contract, the union is working with dozens of partner groups to pass statewide Initiative 1433, which would raise the minimum wage to $13.50 an hour by 2020 and guarantee seven days of paid sick leave.

Right now, even a union grocery worker in Washington has to be sick for three days before he or she qualifies for paid sick leave. For nonunion workers, it’s even worse. The UFCW estimates over a million workers in the state don’t get first-day paid sick leave—and many get no paid sick days at all.

“When you are bargaining at the local level with national and multinational employers, there are limits to what you can achieve,” said Crosby. “So we are clear with our employers that if we can’t win it at the bargaining table, then we are going to keep fighting in different venues—mainly politically, at the state and national level.”

Davis personally filed the I-1433 petition on behalf of UFCW. She has taken leave from her job to work full-time for the union, focusing her efforts on collecting the 300,000 signatures necessary to get it onto the November ballot.

Davis says she was lucky her manager granted her union leave. But from now on, members won’t have to rely on luck, because the new contract spells out the right to come off the job for up to nine months to work full-time for the union. The local plans to expand the union leave program, which has already given a big boost to the petition drive.

“We’ve been working on getting up to 80 percent of the workers in each store to sign,” Davis said. “I go into the store and I talk to everyone and say, ‘Hi, I’m Ariana, I’m the one who filed this petition, and this is why it is good for us.’”

For her, the link between the initiative and the union’s contract campaigns is clear: “We do everything in our power to show the employer that we aren’t going to rest and they won’t catch us off guard.”

Chris Brooks is a staff writer and organizer with Labor Notes.chris@labornotes.org
Related
Steward's Corner: Recruiting and Keeping Volunteers »
The Grocery Companies Denied Us Hazard Pay—So We Went Over Their Heads »
What Are We Doing to Shift the Balance of Power at Work? »
Viewpoint: Failure to Enforce Mask Mandate Leaves Grocery Workers Vulnerable »
Poultry Workers and Allies Organize in the Wake of Anti-Immigrant Raids »