Can Teamsters Save the Right to Retire? 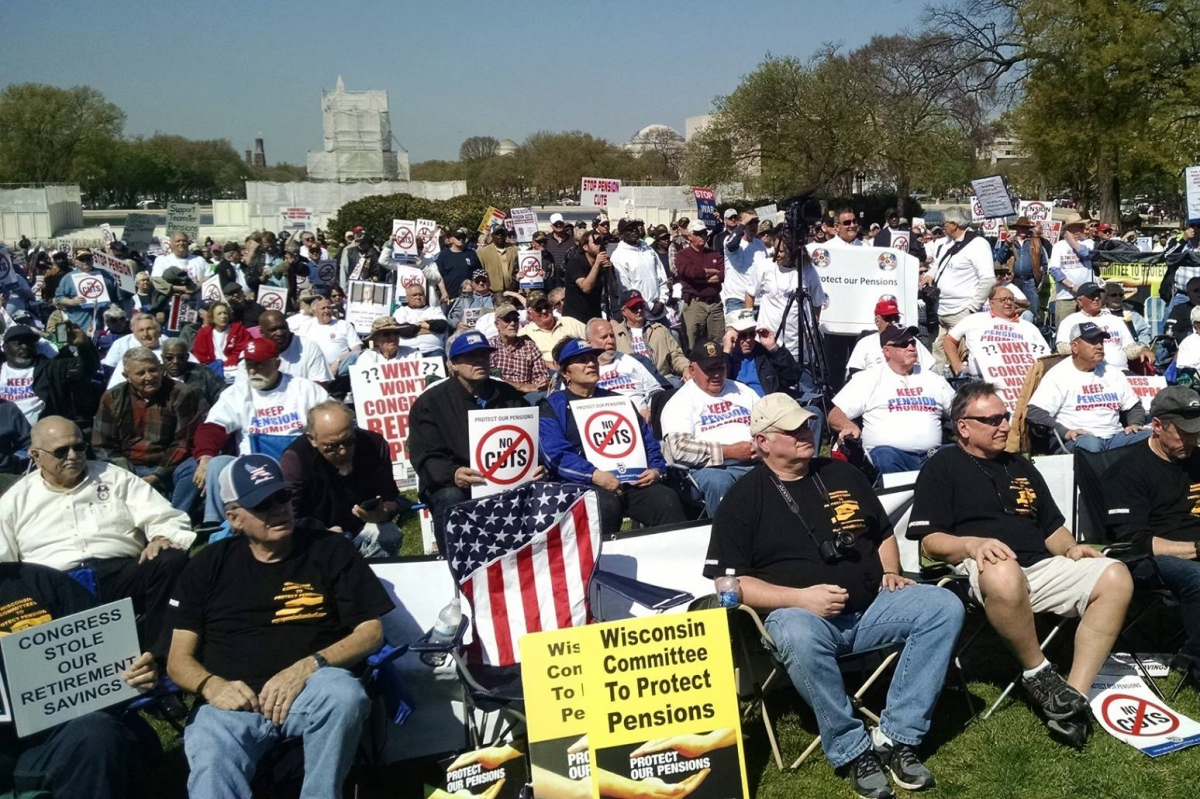 Two thousand retirees and Teamsters from 20 states rallied at the Capitol against the slashing of their pensions. "If they can get away with something like this, what’s next?" asks retired trucker Brad Colesworthy. With the cuts looming, at age 75 he’s back to work full-time, driving a school bus. Photo: Teamsters for a Democratic Union

Over 2,000 retirees and Teamsters from 20 states rallied in front of the U.S. Capitol April 14, calling on the Treasury Department to stop their pensions from being slashed by 50 to 70 percent.

Special Master Kenneth Feinberg is slated to make a recommendation to the Treasury by May 7 on whether to accept the cuts proposed by the Central States Pension Fund, which would hurt 410,000 Teamsters and retirees from Florida to Minnesota.

Retirees have formed “Committees to Protect Pensions” in at least 20 cities. These committees organized the rally, with help from the Teamsters, Teamsters for a Democratic Union, and the Pension Rights Center.

After two back surgeries, a doctor told him he couldn’t go back to work. But Grubbs, determined to get his full pension, kept working “till I couldn’t feel my feet anymore.” After a third back surgery, he’s permanently disabled.

The North Carolina committee sent four busloads of activists, including Brad Colesworthy, who retired after driving a truck for 32 years.

Colesworthy will see his pension cut almost in half, from $2,500 to $1,303 a month, if the cuts go through. He’s concerned about his wife’s medical bills and their mortgage.

So at age 75, he’s back to work full-time, driving a school bus. It’s not how he pictured his golden years, but “I’m blessed I can drive,” he said. “I’ve had open-heart surgery, but I’m still in pretty good shape.”

Central States projects that it only has $18 billion available to pay the $34 billion it owes to current and future retirees, after the Fund lost $8.8 billion in the 2008 stock market crash. At the time, Goldman Sachs and Northern Trust were running the Fund’s investments, thanks to a 1982 consent decree designed to rid the Fund of corruption.

In hindsight, since Goldman played such a large role in bringing on the financial crisis, it looks like the fox was guarding the henhouse.

The activists are backing the Keep Our Pension Promises Act (KOPPA), introduced by Sen. Bernie Sanders of Vermont and Rep. Marcy Kaptur of Ohio, which would solve the underfunding problem by providing backstop money for the Central States retirees whose companies ran away or went bankrupt. The money would come from closing certain corporate tax loopholes.

In North Carolina, retiree activists began their organizing by holding small meetings in restaurants. After the Fund sent letters out last year to notify individuals just how much their pensions would be cut, “that’s when we really started cranking up,” Colesworthy said. “We had meetings all over the state.”

They organized bus trips to Washington, D.C., to lobby their senators and reps, rallied in front of a congressman’s local office, and held letter-writing drives, generating 3,000 letters at a time.

“Our feeling is, if they can get away with something like this, what’s next? Is it Social Security?” Colesworthy said. "This basically opens the door to any pension fund that has been underfunded or mismanaged to submit the same application.”

Congress brought on the problem when it passed the Multiemployer Pension Reform Act in December 2014, after heavy lobbying from the Fund, with no public hearings and no debate. Neither the House nor the Senate voted on the bill; it was attached to the omnibus budget bill, literally in the middle of the night.

Nonetheless, over 20 senators and representatives lined up at the rally to declare their support for the retirees. So did Teamsters President James P. Hoffa, though he’d done little to stop Congress from legalizing the pension theft.

If Treasury rejects the Fund’s proposal, the retirees will get some breathing room. The matter would be back in the hands of Congress, where it’s unlikely anything good or bad could pass till after November’s elections.

On the other hand, if Treasury approves the cuts, next the Fund has 30 days to put the plan to a vote by members. In that case, “we will do everything we can to vote it down,” Grubbs said. “Unfortunately, they stacked the cards against us.”

The law allows a vote by email—which many retirees don’t use—and if you don’t vote, it counts as a yes. “So much for democracy,” Grubbs said.

If members vote no, the law permits the Treasury Department to overturn the vote—and denies the retirees the right to sue. “We very strongly feel that Congress doesn’t have the right to take our judicial branch away from us,” Grubbs said. “We’ll see them in court.”

Alexandra Bradbury is the editor of Labor Notes.al@labornotes.org
Related
Frustrated Over Contract, Locomotive Engineers Vote to Oust President »
Every Union Contract Right Now Should Be the Best Ever »
New Leadership, New Direction in Major Midwest Teamsters Local »
Ahead of Halloween, Sysco Teamsters Give Corporate Ghouls the Heebie-Jeebies »
Viewpoint: UNITE HERE International Should Keep Its Hands Off Local 2’s Pension Fund »