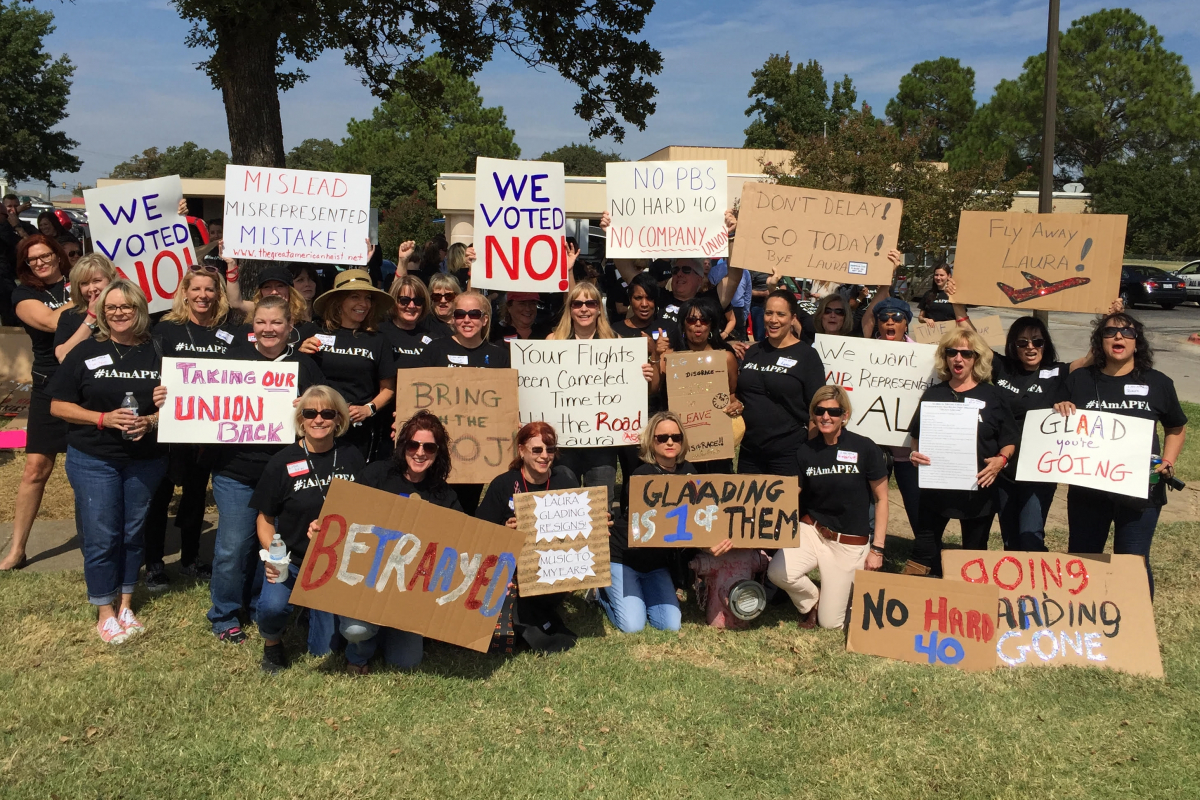 Imagine your union president resigned—and three months later, became a high-paid consultant for your employer. Reformers in the Association of Professional Flight Attendants used this unfortunate situation to spur their campaign to reclaim the union.

Though not a formal slate, the reformers were informally linked with the slogan “2-2-2”—a reference to where their names appeared on the ballot. Their task now will be to rebuild a union that activists charge has practically become a wing of management.

They are also seeking to unite a membership still divided in the aftermath of the merger between American Airlines and US Airways. APFA represents 25,000 crew members at the merged airline.

President Laura Glading stepped down in October—under pressure from angry members, who were pushing for a special recall election. American announced in January that it had hired her as a consultant.

“Laura Glading pretty much had management’s philosophy,” said Ross, a former Air Force mechanic who’s been a flight attendant since 1983. “It got to the point where the lines between the company and the union were blurred so that they were almost unrecognizable.”

Ross points to the five-year contract negotiated in 2014, which was voted down 8,196 to 8,181—and then implemented anyway, after just one day of binding arbitration.

Getting this contract through was key to the merger. Flight attendants were furious when they learned that Glading’s cousin, Tom Weir, had been a top US Airways executive during the merger negotiations. He too now works at American.

One of members’ biggest frustrations was that the agreement failed to reintroduce profit-sharing. In 2015 American enjoyed two of its most profitable quarters ever, bringing in $1.7 billion twice.

The contract also introduced a “hard 40”—a requirement to fly a minimum of 40 flight-hours every month, “which is hard for a lot of people who have obligations and emergencies,” said L.A.-based flight attendant Tyler Bonilla. Previously the requirement had been more flexible: a 40-hour monthly average over the year.

“The flexibility of this job is a reason why people become a flight attendant,” said Bonilla, who started in 2013. It allows them to care for sick family members and take advantage of their travel benefits.

Flight attendants also lost the right to light duty—“which is huge for pregnant women,” Bonilla said. And new hires went backwards. They now work their first year entirely on reserve (i.e., on call), rather than alternating every other month between reserve and a set schedule.

APFA members had voted down another concessionary contract in 2003. That one too was implemented anyway, after the company and union agreed to extend voting for a day.

“Within five minutes, there were these pink pieces of paper, letting us change our votes,” said Miami-based flight attendant Kiri Wirth. “We got on our aircraft, we got another pink slip of paper. There was another one slid under our hotel room door. And another one at the gate.”

That contract included a 34 percent overall pay cut, which the union and management argued was necessary to save American from the bankruptcy wave that was then sweeping the industry.

‘IT WEARS YOU OUT’

Today, senior flight attendants at American can make up to $56.69 per flight-hour in base wages. But that only counts flying time.

“If a flight’s canceled, we lose money,” said Ross. “We’re not paid during the boarding process… When you land and you change aircraft and you’re walking through the terminal, you’re not paid for that.”

“We’re making the wages of around 1998,” said Ross. The Bureau of Labor Statistics reported a median wage of $42,710 that year—and $42,290 in 2014. Accounting for inflation, that means wages have fallen dramatically.

Barbara Thrower, who has worked as a flight attendant since 1973, estimates her salary has been cut by nearly one-fourth since 2003. In the same period, she said, “we’ve lost work rules that you can’t put a price on.

“The job has changed so much,” she said. “The safety professional side of it is far more intense and involved than it was when I started flying 43 years ago. You’re looking at global diseases now, being aware of human trafficking, issues we were not aware of before.

“And just being alert. Self-defense wasn’t a part of my job 15 years ago—and now we have a whole class on how to beat up Bob the Doll with karate chops to the neck… It wears you out.”

Other union flight attendants have been lobbying for a 10-hour minimum rest requirement. A bill pushed by the Communications Workers-affiliated Association of Flight Attendants, which represents 60,000 crew members at 19 airlines, passed the House in February.

While APFA rank and filers also lobbied for the bill, they’re furious that former President Glading is lobbying for the company’s interests.

“The union leadership has forgotten who they’re supposed to be protecting,” said Ross. “We can’t be the ones who protect the company’s bottom line. The company has to do that itself.”

When Glading resigned in October, 300 flight attendants were there to cheer. Fed up with her leadership, they had flown into Dallas from across the country to rally outside the union’s executive board meeting, demanding a recall.

Thrower helped jump-start the rebellion. She was in over-water training last August when she messaged some fellow flight attendants to talk about a slogan: “We came up with ‘kick her to the curb and cross check.’”

Thrower drew up a cardboard sign. She had her husband take a picture of her holding it in front of APFA headquarters, posted it on Facebook—and it took off, shared from the many online groups in which flight attendants participate.

Riding this momentum, Thrower and others organized the October 5 rally.

When APFA officers got wind of it, they threatened to close the union office to deny the demonstrators the use of restrooms inside. So Thrower threatened to order four porta-potties and station them outside the building for a month.

It worked; the building stayed open.

BREAK UP THE COUNTRY CLUB

In January’s first round of elections, Ross came out on top, with 33 percent of the votes for president. He faced longtime APFA staffer Patrick Hancock in a runoff.

Hancock is a retirement specialist who runs his own law firm. Ross, who served as base president in San Francisco for three years, touted his credentials as a working flight attendant. A base is the home airport to which flight attendants are assigned.

The national elections came on the heels of last year’s elections for local leadership at all the of union’s 14 bases. The base presidents sit on the union’s national board of directors.

Base leaders get “trip-removed,” meaning they aren’t required to fly. The reformers argue this perk, while important, has caused many to fall out of touch with members.

“It’s become lucrative—an aphrodisiac—to not have to fly,” said Ross.

To encourage members to run in the base elections, Wirth used a Facebook page she had set up for no voters on the 2014 agreement. Her message was, “‘You don’t have to have been a union person before,’” she said. “‘We have to change the status quo, right now.’”

The challengers had some success, including winning leadership of the large New York base.

“Facebook is our lifeblood,” said Wirth. “You’re talking about flight attendants who are all over the world. They have instant access to information. You can add people to a group, and they can go right to that group and get updated.”

She co-administers the AA Flight Attendants group, which has 8,000 members. About 20 activists devote significant amounts of their off time to answering online questions from other flight attendants.

“People post in there, ‘I’m having a tough time, I’m thinking about not staying with this job,’” Wirth said. “Or ‘What’s the rule on this crew scheduling issue?’ And people come back with advice.”

To facilitate email petitioning via Facebook, she worked with a new flight attendant to develop the “red envelope campaign,” which allows the user to send an email with just one click.

These campaigns have generated 1,000 emails demanding Glading’s removal, Wirth said, as well as 900 to fix the scheduling system at Christmas, and another 1,000 asking the union to remove its public relations firm.

Thrower wasn’t even on Facebook until 2011. After glancing at the union’s pamphlet on the highlights of American’s “last, best, and final offer” that year, she planned to vote yes.

“But knowing Laura Glading, and knowing that she was promoting it,” Thrower said, “I knew I had to research more.” So, guided by some younger flight attendants, she set up a profile and joined the AA Flight Attendants group—where she found “so many smart people out there who could go through that offer and show where it was false… What I didn’t like [in the contract] was all these ‘to be determined’s.”

Flight attendants say social media has changed the dynamics of the election.

In past elections, “if there was a rumor going around, it’d go around for a week,” said Ross, “but now, you can respond instantly.

Still, candidates are making base visits to introduce themselves in person. Supporters are also promoting their campaigns with bag tags, pins, and bracelets.

“Not everybody is computer-savvy, let alone Facebook-savvy,” said David Bell, who’s worked at American for 25 years. “We used to have a phone tree, and we don’t have that anymore… When we had the strike back in ’93, that phone tree was a great resource for us. That needs to be brought back.”

“I think the more we talk about [the election] in person, the further we’ll get,” said Bonilla. “On Facebook it’s a select group, and it’s the same people that you’re talking to over and over again.”

Ross made a seven-day road trip on his days off—starting in Charlotte, North Carolina, a legacy US Airways base, where he had one of his poorest showings in the first round.

“The campaign right now,” said Ross, “is trying to give this union back to the membership, to give them a union that they actually feel is fighting for them.”

Dan DiMaggio is assistant editor of Labor Notes.dan@labornotes.org
Related
Employers Are Using the Crisis to Push Concessions They Don't Need »
Turn the Tables: Demand Concessions from Your Employer »
Maine Shipbuilders Bring the Hammer Down, Reject Concessions »
Akron Professors Vote No on 'Hit List' Layoffs that Would Tear Up Contract »
Viewpoint: Concessions Are Back. So Are the Flashbacks. »