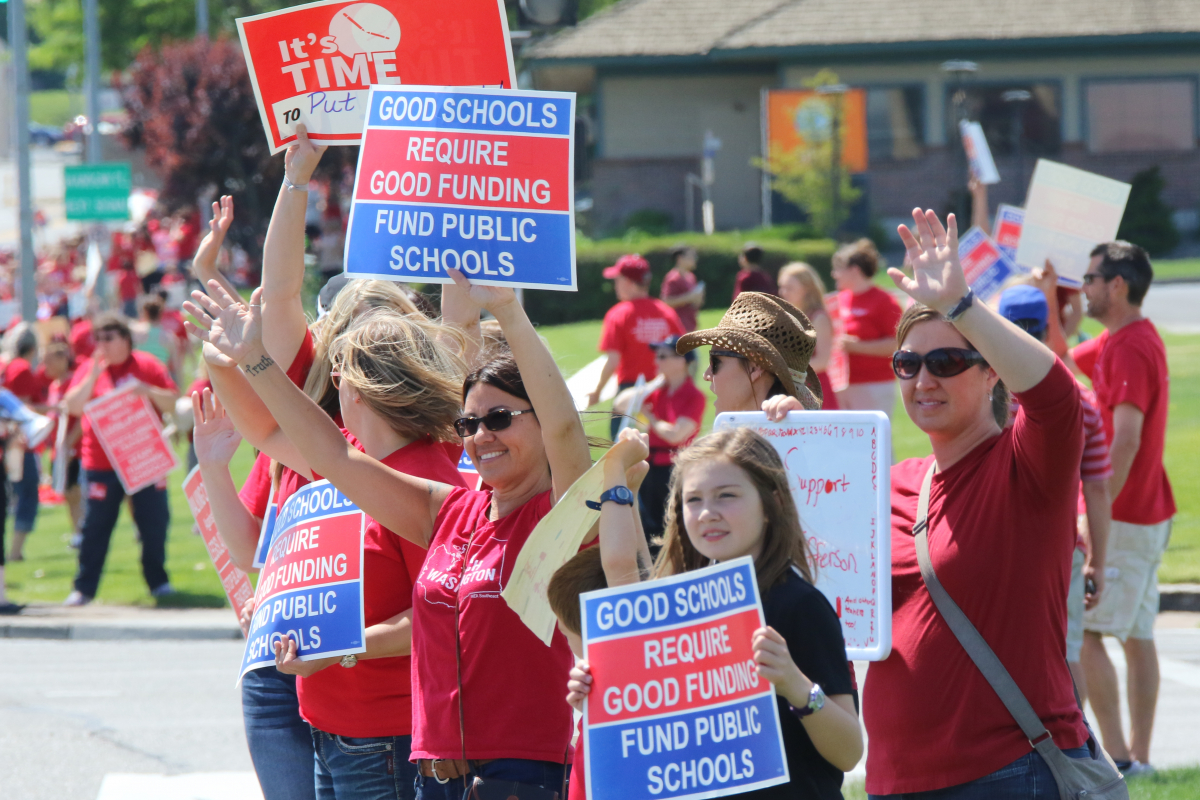 Lawmakers in Washington state are scrambling to get ready for a special session after the state’s highest court announced it will start charging a penalty of $100,000 per day while legislators continue illegally underfunding the public schools.

The court’s move comes on the heels of one-day strikes that rolled across the state this spring. Half the members of the Washington Education Association (WEA), in some 65 school districts covering 40,000 teachers, walked out—including on the state’s conservative side, east of the mountains.

The state’s attorney general claims teacher strikes are illegal, but that didn’t stop the teachers.

Picket signs read, “On Strike against Legislature,” highlighting that this strike was against the state government, not the school districts. In fact, some districts announced their support.

What the educators want is for the state to send their districts more money. Teachers in Washington have borne the brunt of two decades of underfunding in lost compensation and ballooning class sizes. The problems only intensified when the economic crisis hit. Some districts imposed layoffs.

Washington schools now have “among the largest class sizes in the nation,” says Paul Hope, a math and science teacher at Mt. Vernon High School.

Voters last year approved a statewide initiative to reduce class size. But this year the legislature thumbed its nose, claiming the price tag was too high, and mustered a supermajority to override the popular vote and postpone the class-size reductions.

Meanwhile teachers’ real paychecks have shrunk, as years ticked by with no cost-of-living raise or increase in the employer’s contribution to their health insurance premiums. “Correcting for inflation I’ve lost 21 percent of my spending power since the financial crisis,” Hope says.

The idea for the rolling strikes was hatched in April in the WEA’s Fourth Corner region, which includes the city of Bellingham. It’s north of Seattle, near the Canadian border.

At a meeting of local leaders, Hope—the union’s regional president—broached the idea as a way of drawing public attention to the problems of teacher compensation and class size.

“It was one of the most passionate meetings that I have ever been to,” he said. “All I did was say, ‘What do you think about this?’ The depth of the feeling that emerged in that meeting—there was crying, there were raised voices, there was hooting and hollering.”

Within a week most of the region’s 32 locals had voted to hold one-day strikes. They coordinated the actions so that every day there would be another news report about teachers in yet another district walking out.

Soon the strike wave spread south to the next regional council, Snohomish, and on down along Puget Sound. Word also flashed around the state through a popular Facebook page, the Badass Teachers Association.

“Once the idea got traction, it really spread on its own,” Hope said. For frustrated teachers, “it was a very empowering thing to be able to do, to stand up.”

“People were saying, ‘Finally!’” said Renton teacher Julianna Dauble. “We have been waiting, not just for permission, but for this to be a collective effort…. It was kind of a relief, for most people I talked with.”

The Renton local was one of the few that opted not to strike, though. Dauble says teachers who wanted to strike weren’t organized enough, and a president who didn’t like the idea of disruption pushed through a no vote. The local held a rally instead.

But “now teachers are looking at other districts and are more adamant than ever,” she said. With many teachers around the state now bargaining for local contracts, she believes “there will be more strikes coming.”

In the state’s biggest local, the strike vote itself was a big organizing project, says John Donaghy, executive director of the Seattle Education Association.

The union took a deliberate approach. Before the vote, Donaghy says, member representatives in the schools held “thousands of conversations” to get co-workers on board.

The idea was to ensure “robust participation,” Donaghy said. “We didn’t want to rush to call the action at the expense of having the participation to make an impact.”

It was also a chance to bolster internal organizing by identifying potential leaders in each school. Seattle teachers are in local bargaining too.

The conversations worked. More than 80 percent of members participated in the vote, which was conducted in each school by the member rep, rather than at a general meeting as smaller locals had done.

“The locals in Bellingham called us up, ‘Hey, what can we do? Let us buy your signs for you,’” Donaghy said. The same picket signs traveled all over Washington, collecting autographs from the different strikers who carried them.

About 2,500 Seattle teachers walked out. Members picketed at 10 high schools, then bused downtown for a march that filled block after block with a multitude of red T-shirts.

Around the state, students and parents turned out to cheer the strikers on. A television news crew in Bellingham hunted for an irate parent who would rail against the strike—but couldn’t find one.

A poll commissioned by the union found that 56 percent of voters supported the strikes, while 38 percent opposed them. Two-thirds agreed the schools were underfunded.

Yet after all this, “the legislature just raised the middle finger,” Hope said.

That’s where the court-ordered fine comes in.

It’s the latest development in McCleary v. State of Washington, a 2007 lawsuit filed on behalf of two families by the Network for Excellence in Washington Schools, a coalition of 430 organizations, mostly school districts and local chapters of the WEA.

By underfunding schools, they alleged, the legislature was violating the state constitution, which says, “It is the paramount duty of the state to make ample provision for the education of all children residing within its borders, without distinction or preference on account of race, color, caste, or sex.”

The argument hinged on how you define paramount, ample, all, and education. In January 2012, the Supreme Court of Washington ruled that the state was indeed shirking its constitutional top priority.

Since then the court has repeatedly ordered legislators to provide a plan to comply with the constitution. Last fall, it found the state in contempt of court for failing to do so.

After the legislature closed this summer with still no plan, the court announced August 13 that it would begin levying a penalty: $100,000 a day, effective immediately, until the governor convenes a special legislative session that produces full compliance. The money is to be held in a separate account dedicated to basic education.

“It’s clear the court agrees that our kids can’t wait for the legislature to act on its own,” said WEA President Kim Mead in a statement celebrating the move. “Now, perhaps, the state will step up to its duty to our students and educators.”

Governor Jay Inslee publicly urged legislative leaders to work “as quickly as humanly possible” to prepare the way for a special session, “so that they can step up to our constitutional and moral obligations to our children and lift the court sanctions.”

Washington has the nation’s most regressive tax structure, with a sales tax but no income tax.

That means rich people such as Microsoft billionaire Bill Gates, a Washington resident (and pusher of corporate-style education reform), pay a far lower share of their incomes than poor people—and the state budget suffers.

“The basic reason they’re not funding us is they’re trying to preserve tax breaks for rich people,” Hope says.

Many of the union’s districts, including Seattle, are now in local contract bargaining. With limited funds to work with, educators will be pushing to “move money from paperclips to people,” Hope says.

Strikes could be on the way in these contract fights. Educators in Pasco, in Southeastern Washington, have already voted to strike if they don’t reach a deal by the time their contract expires August 31. It would be the first teacher strike there since 1979.

Alexandra Bradbury is the editor of Labor Notes.al@labornotes.org
Related
As Omicron Rages, Teachers and Students Fight for Safety Measures in Chicago and Elsewhere »
Teachers Strike against a ‘Heartless’ School Board in Biden’s Hometown »
How Oakland Teachers Took Control of Our Return to School »
Jordanian Teachers Union Leaves Behind Legacy of Wins »
Pandemic Discrimination Against Asian Americans Has Long Roots »