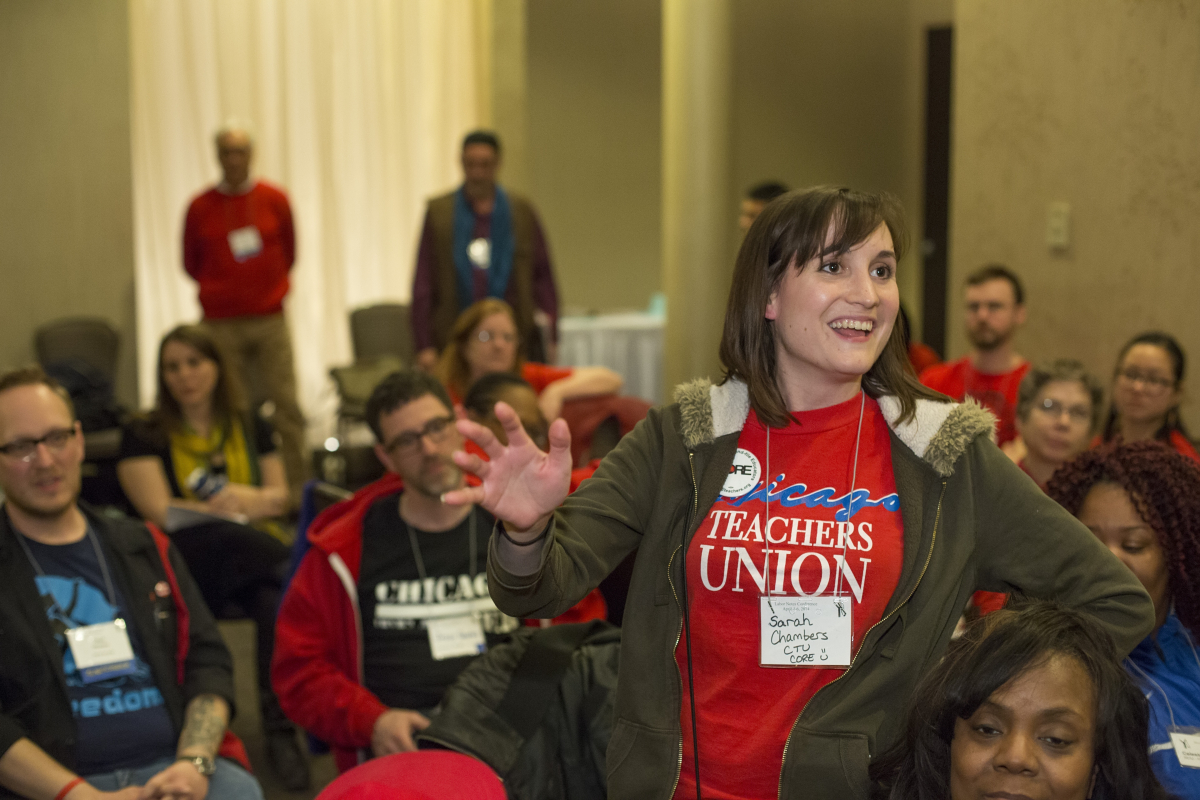 It’s also the basic premise of a new network called United Caucuses of Rank-and-File Educators, which brings together activists who are working to reignite rank-and-file involvement in our national unions.

UCORE’s 20 member caucuses come from all over the country and from both teachers unions, the National Education Association and American Federation of Teachers. A few who’ve recently won local office are EDU in Massachusetts, NEW in Newark, REACH in Minneapolis, and Union Power in Los Angeles.

Locals and caucuses in the network consider themselves social justice unionists, balancing bread-and-butter issues with working to create equity and keep public schools in the hands of communities rather than private enterprises.

Among their central organizing issues are school closings, charter school proliferation, and the overuse of testing.

“It was always clear from the outset in the network that teachers would have to work with parents and students to survive,” says Kristin Luebbert, a classroom teacher from Philadelphia and a member of UCORE’s steering committee. “Unionism can’t just be about teacher issues.”

UCORE’s work with Philadelphia’s Caucus of Working Educators is a case study of how the network helps.

When Philly teachers started feeling the pressure of school closings, encroaching charter schools, over-testing, and attacks on their contract, they asked Chicago teachers to help them start and build up their own caucus. CORE sent its member Al Ramirez to host a boot camp for those interested in mobilizing and transforming their local.

“The whole push from Chicago and the Chicago Teachers Union around a style of leadership that is based on grassroots organizing is what we wanted for our caucus,” says Kelley Collings in Philadelphia.

In fact, one way the new caucus built solidarity was through regional book groups based on Labor Notes’ How to Jump-Start Your Union, which describes how Chicago teachers built towards their landmark 2012 strike.

“Philadelphia teachers felt like they were the only ones being attacked, the only ones trying to fight back,” Luebbert says. “Being in the network helped us realize this is happening all over the country, and there are others who we can link up with.”

The Philly caucus relied on the network as it prepared an opt-out campaign to resist standardized tests, based on campaigns by CORE and Seattle’s Social Equality Educators. Seattle and Chicago teachers shared organizing timelines, materials for flyers, and examples of opt-out letters.

CORE’s Sarah Chambers walked Philadelphia activists through the steps of organizing school by school. She especially helped parents and teachers plan for the inevitable pressure they’d get back.

When Philadelphia teachers received disciplinary notices, Chambers again lent support. She says teachers’ experiences around the country are reinforcing the lesson that in the face of discipline threats, a solidarity campaign with local and national participation by teachers, parents, and students is key.

“The more organized you are and the more positive press you receive,” Chambers says, “the less likely bosses will discipline you.”

The network meets every summer to help caucuses of all types develop their organizing structures. Once a month we meet over the phone to problem-solve with particular locals. Like-minded teacher unionists are using the network to help each other navigate union elections, grassroots campaigns, and contract bargaining.

“It seemed to us that unions were stuck,” says Luebbert, “that they had lost touch with the importance of having grassroots activism, having connection to rank-and-file members, and fighting for students and parents.”

In areas where unions are weaker, UCORE helps build caucuses, such as North Carolina’s Organize 2020. Teacher Bryan Profitt says the summer conferences and year-round contact have been essential to the caucus’s efforts.

“Doing this work in the South can be lonely,” says Profitt, “but knowing that we can learn from, and lean on, educator activists all across the country has not only made us smarter, it’s made us feel a part of something…That sense of belonging is sometimes half the battle.”

Michelle Gunderson is a member of UCORE’s steering committee and a first grade teacher in the Chicago Public Schools. UCORE is hosting a workshop on social justice unionism at the Network for Public Education conference April 25-26 in Chicago. For information contact Samantha Winslow at samantha[at]labornotes[dot]org.