Seattle Activists Take Wage Enforcement into Their Own Hands 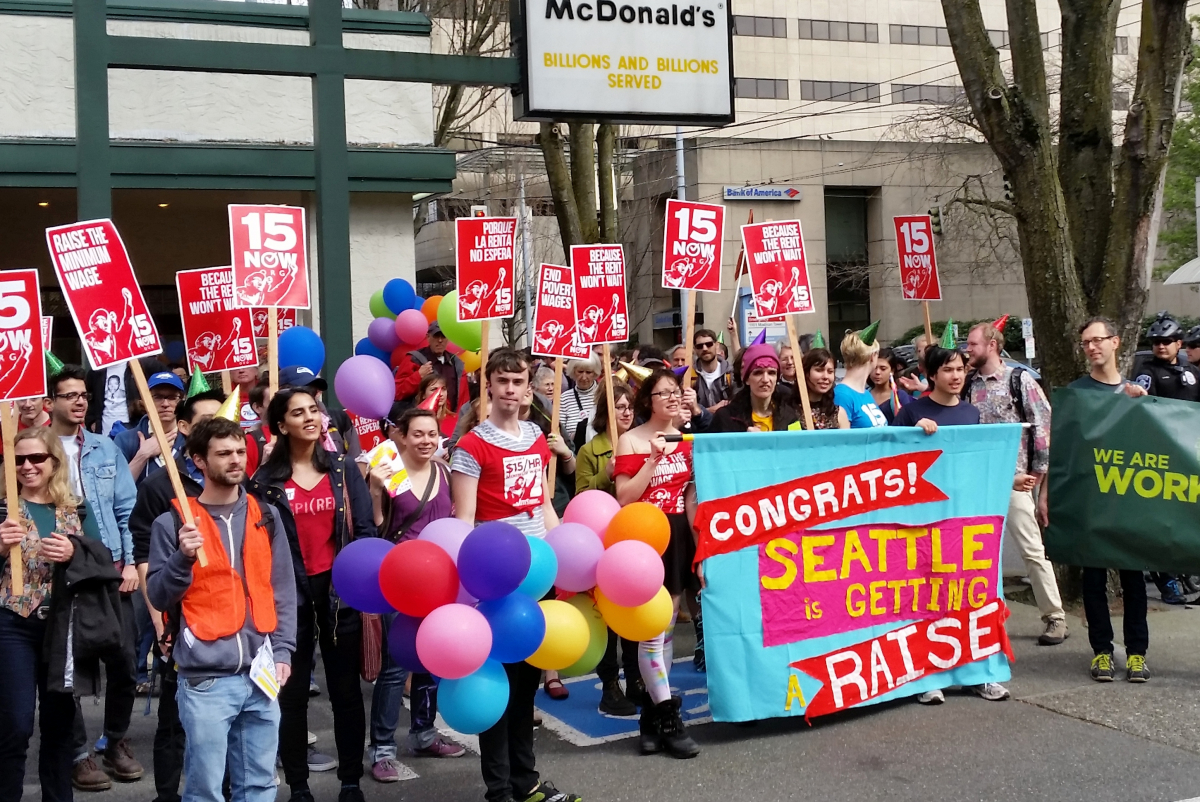 Decked out in party hats and blowing noisemakers, 200 marchers in Seattle’s Capitol Hill neighborhood made the rounds of low-wage workplaces. Last weekend’s parade was a celebration of the city’s new minimum wage—and a serious effort to make sure workers know they’ve got a raise coming.

“Some employers are resisting, especially those in franchising,” said Jess Spear, an organizer for 15 Now Seattle. And marchers are concerned the city isn’t doing enough to publicize or enforce the increases.

Seattle’s minimum will hit $15 an hour across the board by 2021, with small and large employers phasing in on different schedules. The first step up to $10 for small businesses and $11 for large ones goes into effect April 1.

The industry group that represents fast-food chains has sued to block the boost. The International Franchise Association wants every local McDonald’s treated as a small employer. But a federal judge refused to put the raises on hold while that case wends its way through court.

A Labor Board complaint against McDonald’s, issued in December, bolsters the workers’ side. The board called McDonald’s a “joint employer” liable for labor practices at its franchises since so much of daily restaurant operations is controlled from the top. Hearings in that national case began March 30.

PICKING UP THE CITY’S SLACK

Seattle’s March 28 event was promoted by the city and state labor councils. Activists from at least 15 unions participated. “If you make minimum wage and your boss doesn’t pay,” they chanted, “What should you do? Call us right away!”

Seattle has yet to hire a permanent director for the agency that’s supposed to ensure compliance. Some worry that employers may get away with violations—a problem that’s already cropped up for the city’s paid sick leave ordinance.

The group stopped at Chipotle, IHOP, Starbucks, Subway, and McDonald’s. At each, a small delegation led by City Councilmember Kshama Sawant and new State Senator Pramila Jayapal went inside to talk about the raise and how it was won. Workers said they appreciated the info.

“We’ve already heard from workers whose bosses say the laws don’t apply to them,” said Sejal Parikh of Working Washington, a community organization backed by the Service Employees (SEIU) that’s been reaching out to fast-food workers.

“In our outreach to low-wage immigrant workers, we are hearing a lot of questions about which rate will apply,” said Hilary Stern, head of the day labor organization Casa Latina. “The law is very confusing, and it is essential that workers are educated so that they don’t get cheated by unscrupulous employers.” Campus workers marched April 1 at the University of Washington, pushing the administration to comply with the new ordinance and raise its minimum wage. Photo: Paul Bigman.

Meanwhile a legal twist has jammed up the raise for many public sector workers. Based on a ruling in nearby SeaTac, some employers are taking the position that the city can’t set the minimum for other governmental bodies.

The school board and the county have raised pay—though without accepting that they’re legally obliged. But the state hasn’t. Seattle’s largest employer, the University of Washington, has dragged its heels too.

Nearly half the university’s employees make less than $15 an hour. Among them are 800 low-wage members of Washington Federation of State Employees Local 1488, who work in food service, custodial, grounds maintenance, and the building trades. In last year’s negotiations they boosted their wage floor to $12 by this July.

But many low-wage campus workers are students, not represented by any union. Workers believe the university, which prides itself on being “an employer of choice,” should bring all staff up to $15 immediately.

Western Washington University, two hours north of Seattle, came closer when it agreed to move its lowest-wage union employees up to the step nearest $15 in their pay grade by last July—putting everyone at least at $13.94, with regular raises to follow. Union President Paula Lukaszek, a university plumber, said WFSE is still fighting to get the UW to follow that example.

The agitation is making headway. Yesterday the UW announced it will bring all full-time workers up to $11. Today when WFSE members joined grad students (UAW), clerical workers (SEIU), and professors in a march around campus, the university’s interim president came out to tell the crowd that within weeks she expects to announce a raise for part-time workers too.

The school district is going along with the increases. Dave Westberg of Operating Engineers Local 609 said over the next two years at least 200 members will be affected.

Rachel Kayne, an assistant kitchen manager, is one of them: she makes less than $14. “You can’t live in Seattle anymore on that pay,” she said. “We’re being pushed out of the city.”

City workers will benefit too, though at first the city failed to budget for the increases, said Ian Gordon of Laborers Local 1239, which represents groundskeepers. He credits socialist City Councilmember Kshama Sawant for making sure the money was there.

“But there’s still a lot of subversion and confusion,” Gordon says, pointing to a national news story that claimed the raise was forcing Seattle restaurants to close. The story was debunked. Owners of every restaurant cited denied the increase had anything to do with their decisions—and some were actually expanding, not closing.

Speaking from a McDonald’s parking lot where workers walked out during fast-food strikes last year, Sawant stressed that winning the raise took a fight.

“Part of building a political struggle against the status quo is celebrating victories that we win, and reminding everyone at the bottom that they were a big part of those victories,” she said, “and empowering them to go farther and make bigger gains.”

The wage hike comes amid changes to Seattle’s political system. Until this year the city council’s nine members have all been elected at large. But in 2013 voters approved a switch electing seven of them by geographic district.

Sawant is running in one of the new districts. She’s drawn several challengers, and it’s clear the Chamber of Commerce and the mayor want her out.

In her first election, Sawant had widespread informal support from labor, but only a few endorsements. This time, labor is coalescing behind her. Already she’s won endorsements from a dozen unions, including the huge Boeing Machinists local, the Seattle Building Trades Council, and the Longshore union (ILWU).

Inspired by Sawant and the wage increase, John Persak, an executive board member in Seattle’s Longshore local, is running against the incumbent council president.

“I know how to survive on minimum wage,” he said at the rally. “Before I became a longshoreman, I worked at McDonald’s and other minimum wage jobs. It helped me to appreciate my union and never take it for granted.”

Paul Bigman is a member of the executive board of Seattle’s Martin Luther King, Jr. County Labor Council. To check how the law applies to you, visit whatsmywage.org.