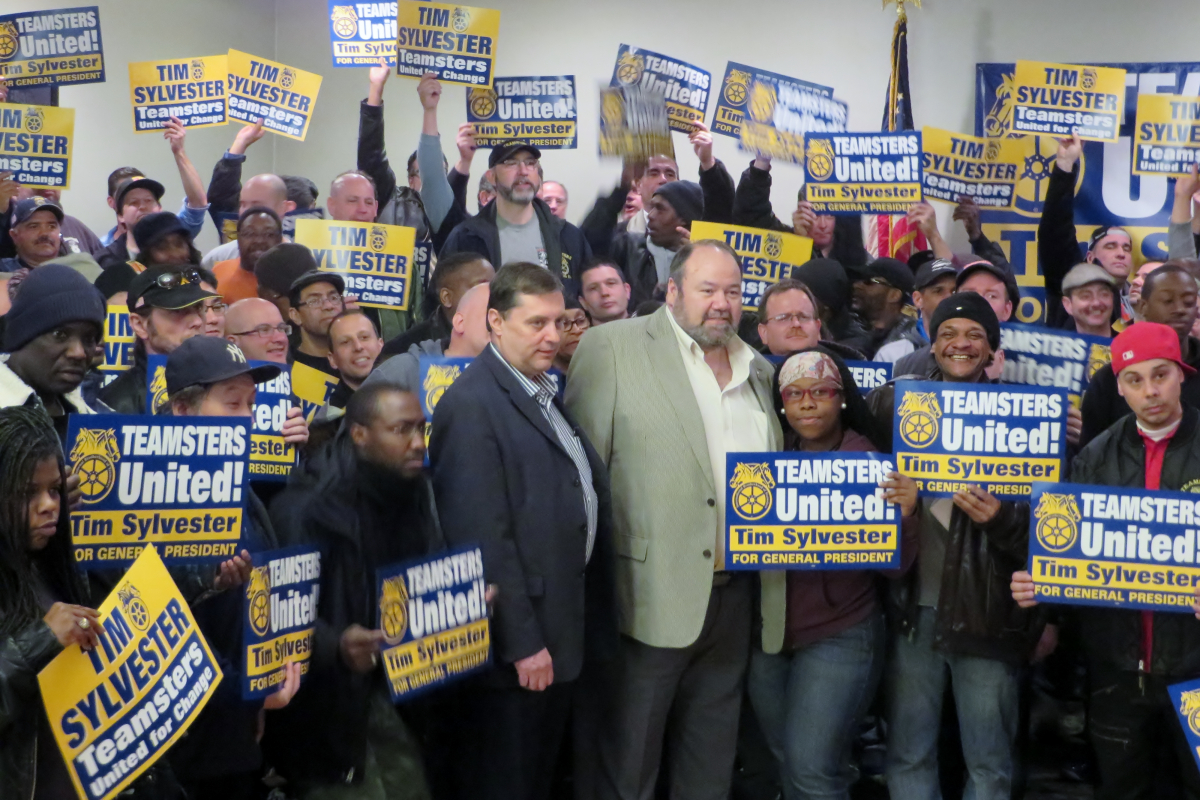 Are the chickens finally coming home to roost for Teamsters brass? After the Hoffa administration forced concessions onto unwilling members, opponents are teaming up in the 2016 race. Photo: Alexandra Bradbury.

Are the chickens finally coming home to roost for Teamsters brass?

After a wave of anger at concessions the union forced onto unwilling members in its national contracts, some of President James Hoffa’s biggest opponents are teaming up to challenge him in the 2016 race.

“I feel good about it,” says Abel Garcia, a UPS feeder driver and second-generation Teamster in Oxnard, California. “There’s a new movement, a fresh breath of air across the country.”

Sylvester tops the ticket. He’s president of Local 804, based in Queens, which drew national attention for its militancy last year when 250 package car drivers were fired after a wildcat walkout to protest an unjust firing. The local ran a public campaign that got all the firings reversed.

To compete with the coalition’s Queens kickoff, the international sponsored an event the same morning, a few blocks away, to thank Secretary-Treasurer Ken Hall for supporting the wildcatters—though in truth, Hall didn’t do much but claim credit.

at the New York City Troublemakers School, a day of skill-building workshops, education, and strategy discussions to put some movement back in the labor movement.

Zuckerman is president of Local 89 in Louisville, Kentucky, the biggest UPS local and a center of resistance to the latest concessionary contract. He ran for vice president last time around on a rival ticket led by International Vice President Fred Gegare, a former Hoffa ally.

Package car driver Joan Elaine Miller traveled up from Philadelphia for the standing-room-only New York rally. “Our current elected officials have sadly—and we have no one but ourselves to blame—run unchecked for 17 years,” she said.

“I basically got off my butt and decided to get involved.”

The opposition slate is backed by the union’s longtime reform caucus, Teamsters for a Democratic Union, which has run vigorous challenges every five years but so far hasn’t been able to topple Hoffa.

What’s different this time: members are angrier, after having giveback contracts shoved down their throats.

“There’s no way in the world we should be giving concessions to a company that’s making $4 billion in profits annually,” Miller says. “What kind of statement is that about our union?”

Under the Teamster constitution, a national contract can only be approved once all its local supplements are ratified. In 2013, rank-and-file UPSers voted to reject 18 of 28 local supplements, covering 63 percent of members—holding up the whole national pact.

Members were angry at the deal’s givebacks, especially an increase in out-of-pocket health care costs, and its failure to address the proliferation of part-time work, coerced overtime, technological surveillance, and supervisory harassment.

The union went back to the table and improved the health care a bit—but focused greater energy on pushing members to vote yes. When Teamsters continued to hold out in some locals, international officers simply declared they had the right to impose the contract unilaterally.

Activists like Garcia took heat for having backed the vote-no effort. “I worked with the shop stewards and we put together a Central Coast stewards’ steering committee,” he said. “From Newbury Park, California, all the way to Paso Robles, we did a no vote twice. Then the contract was imposed on us and I was removed as steward.”

Teamsters outside UPS are fed up too. “Morale is terrible here,” says Jimi Richards, a road driver for YRC Freight in Atlanta.

Since 2010, members working for YRC Worldwide have endured a 15 percent wage cut and a 75 percent reduction in the company’s contribution to their pensions—while executives continue to rake in the stock options and bonuses.

“Members were duped,” Richards says. “They lied and threatened, said ‘If we don’t get this passed, we’ll close the doors.’ Come to find out they made a profit in the fourth quarter.”

Rank and filers’ right to vote for their national officers is now a permanent feature of the Teamster constitution. TDU’s advocacy notched that win in a January settlement agreement that replaced the 1989 consent decree as a way to monitor for corruption and enforce member control of the union.

But getting onto the October 2016 ballot won’t be easy. The coalition slate’s first hurdle is a petition drive this summer. It takes 50,000 Teamster signatures to become an accredited candidate.

Then in early 2016, each local will elect delegates to the June convention, where a candidate must win 5 percent of delegate votes to be nominated.

That threshold is tougher than it sounds. Local officers beholden to top leaders often run unopposed for delegate. When they do face opposition, they have the edge financially and strategically. And at the convention, delegates are pressured to back incumbents.

Even so, to avoid competition, the current administration has been keen to raise the nomination threshold to 10 percent of delegates. The settlement agreement delayed the pain, keeping it at 5 percent through the 2016 and 2021 elections. But after that, delegates may vote to raise the bar.

The impending change ramps up the urgency. “It just makes it all the more important that we win this time around,” says Frank Halstead, a Los Angeles grocery warehouse worker and TDU member, “because if we don’t take advantage of this opportunity, Hoffa’s going to do everything he can to make sure we never have this chance again.”

“I’m going to try like hell to get these people through,” says Garcia. He plans to run for delegate supporting Teamsters United, and also run again this year for principal officer of his local; last time he lost narrowly in a three-way race.

Richards says the Teamsters United campaign’s biggest obstacle will be “obviously money, at a time when a lot of us, with the pay cuts that we got, are living paycheck to paycheck.”

But challengers will get a boost from at least one improvement to the rules: a week before the 2016 election, each candidate gets a free mailing to members. In the past the cost has deterred TDU-backed candidates from mailing at all, while Hoffa has sent out multiple glossies.

And unlike the incumbents, the opposition has an activist culture. Members meet regionally and keep in touch online so they can mobilize on a dime when issues flare up.

For instance, the Cromnibus spending bill that was pushed through Congress in December contained a sneaky provision allowing cuts to the benefits of retirees in multi-employer pensions. “We found out through AARP and TDU that they were slipping that part in,” Richards says.

“We used social media to round everyone up and raise hell. Members were out on their own for six days before the [Teamsters international] came out with a statement… Congress voted it in that night.”

For Miller the challenge will be getting her co-workers in motion. “They’re all very supportive: ‘Yeah, you’re right Joan, you’re right,’” she says.

“I’m hoping to motivate them. An active union is a healthy union. A busy union is a good union.”

A version of this article appeared in Labor Notes #433, April 2015. Don't miss an issue, subscribe today.

Alexandra Bradbury is the editor of Labor Notes.al@labornotes.org
Related
Challengers Win Big in UAW Elections; Presidency Headed to Run-Off »
Every Union Contract Right Now Should Be the Best Ever »
UFCW Reformers Look to 2023 »
New Leadership, New Direction in Major Midwest Teamsters Local »
Ahead of Halloween, Sysco Teamsters Give Corporate Ghouls the Heebie-Jeebies »