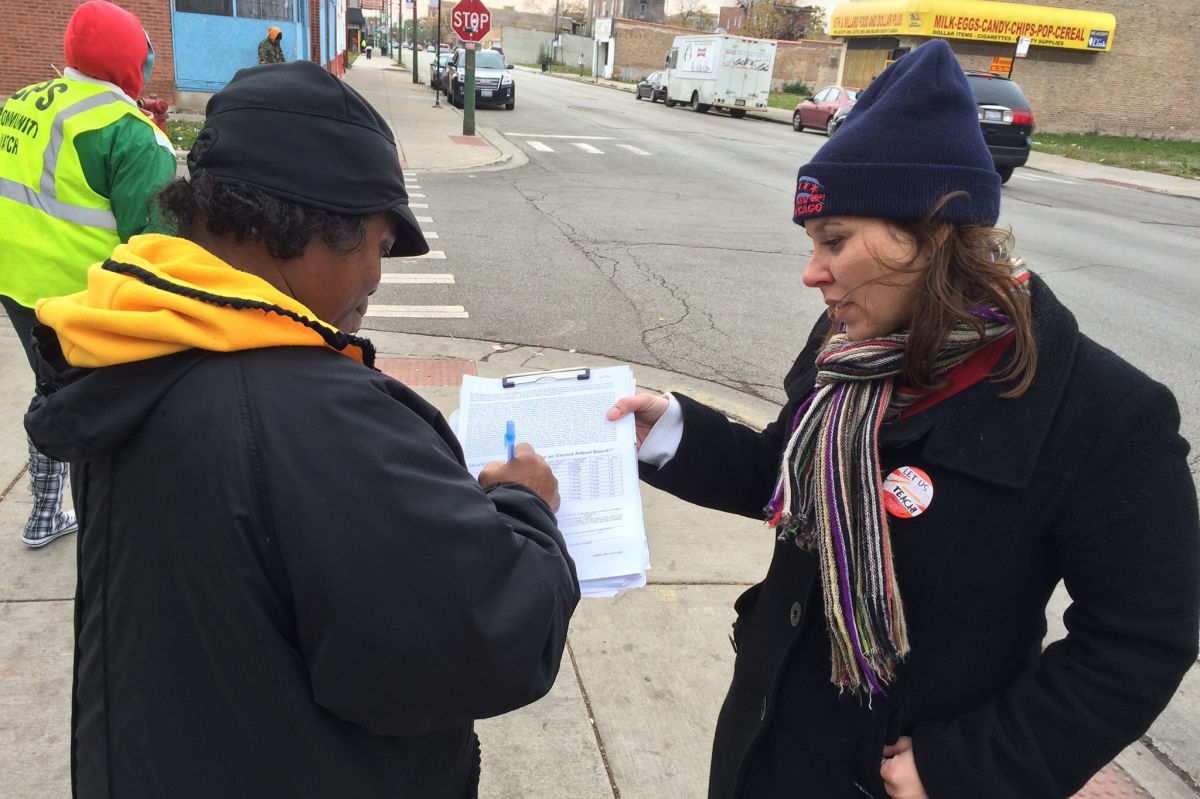 Chicago's mayor appoints the school board, so Chicago Teachers Union members collected petitions to see if voters think their school board should be elected. The nonbinding question will be on the ballot in 37 wards. Photo: CTU.

The Chicago Teachers Union and its allies are making a bid to channel the spirit and unity of the teachers’ 2012 strike into unseating “Mayor 1%” and his city council allies.

It’s been a grueling four years under Rahm Emanuel. CTU beat back some of the worst concessions the mayor’s school board pushed, but the union was hit hard by a record 47 school closings in a single year. Broader attacks hit public sector workers and their pensions.

The new, independent political organization United Working Families—formed by CTU and SEIU Healthcare Illinois along with community groups such as Action Now—isn’t just out to oust the mayor. It’s trying to create a progressive, pro-labor political infrastructure to challenge the mayor’s pro-business agenda.

“Whenever you have incumbents that vote 100 percent of the time with the mayor of Chicago and his corporate interest agenda, there is clearly a need to have a more independent voice,” Johnson said.

But not surprisingly, it’s hard to get many Chicago unions to endorse Emanuel’s rival. Many private sector unions have praised the mayor’s development projects, hoping they’ll mean building trades and hotel jobs. Even in the public sector, where Emanuel has pushed deep budget cuts, unions may fear retaliation if they support his opponent and lose. Many think it’s futile to oppose such a powerful candidate.

So without a united front among Chicago union leaders, the United Working Families coalition is seeking out ways to engage directly with the 250,000 rank-and-file union members they represent.

That means setting up community meetings in key wards and reaching out to union members and other voters at the most grassroots level. “These are not just simply about getting out the vote, it’s about really laying out a vision: how do you deal with issues of safety, violence, disinvestment in schools,” Johnson said.

Defeating the mayor would be no small feat. Emanuel is a Democratic Party and Obama administration insider. He’s raised $10 million. And historically it’s been nearly impossible to beat Chicago’s Democratic machine, which operates in lockstep with the mayor.

Hopes were high last fall as CTU President Karen Lewis explored a challenge to the mayor; Lewis polled well, and excited both rank-and-file teachers and the progressive voter base. A Lewis/Emanuel contest would have clearly posed the question: Which way forward for Chicago?

When Lewis bowed out of the race for health reasons, a challenge to Emanuel and his agenda seemed further out of reach.

Garcia is one of four candidates opposing Emanuel in the February 24 election. (If no one gets a majority, there’s a top-two runoff in April.)

Part of United Working Families’ plan to beat the mayor is simultaneously running rank-and-filers and community activists for city council seats, coordinating those campaigns with get-out-the-vote efforts. It has endorsed seven incumbents on the city council, five CTU members, and 11 other grassroots challengers.

It remains to be seen whether this energy will translate into a lasting organization—and whether it’s possible to build a progressive political bloc independent of the city’s Democratic machine.

Meanwhile Emanuel has racked up more union campaign contributions for his reelection than in 2011—including from the Teamsters, the Pipefitters, UNITE HERE Local 1, Operating Engineers, Sheet Metal Workers, Carpenters, and SEIU Local 73, which represents city workers and school employees. Four years ago, every SEIU local in the city stayed out of the mayoral contest, as did CTU.

Six weeks before the election, the Chicago Federation of Labor and AFSCME Illinois, among others, were still sitting out the mayor’s race, while AFSCME has endorsed some of the coalition’s city council candidates.

Internal disagreements over union strategy are usually conducted in whispers, but in December SEIU’s local vs. local fight over the mayoral race went public. Tom Balanoff, head of SEIU’s state council and president of its janitors Local 1, told reporters the health care local had violated the state council’s decision to stay neutral in the mayor’s race.

Balanoff said the state council would address the violation through its own internal processes. SEIU Healthcare Illinois had indeed endorsed Garcia and made a hefty contribution. There was no public scolding, however, for SEIU Local 73’s $25,000 contribution to Emanuel’s campaign.

“I think there is a growing set of progressive labor unions, but it’s still in a larger environment that still expects to meet the needs of their members [by] sticking to the status quo,” Patel said. By breaking from the pack, the health care union opens up a dialogue.

“What that indicates to me is that people have a taste, an appetite for an independent political structure that puts the needs of people first,” Johnson said.

SPIRIT OF THE STRIKE

CTU and its allies announced United Working Families a year ago. The point was not only to challenge Emanuel’s reelection, but also to engage in citywide issue campaigns, including raising the minimum wage, fighting charter school expansion, and restoring an elected school board. As a result of their efforts, the February ballot also contains advisory questions on the elected school board in 37 out of 50 wards, and for paid sick days citywide.

Meanwhile, Emanuel’s been covering his left flank by pushing a minimum wage law to raise the floor to $13 by 2018. Unions and community groups are supporting grassroots efforts for $15.

For many of the teachers and supporters who took on the mayor in 2012’s weeklong strike, United Working Families represented the logical next step. Despite deep public support, strong organization at the school level, and mobilization on a massive scale, CTU members found that the mayor and machine-controlled city council wielded a great deal of control over their workplace: Chicago’s public schools.

Specifically, CTU has been limited by the city’s Tax Increment Financing policy, which diverts a big chunk of property taxes to development rather than public schools, and by the mayor’s ability to appoint the school board and fund charters at the expense of existing public schools.

Patel said this year’s election campaign is about building and developing support for the coalition’s issues. “Right now we are in these fits and starts,” she said. “There is all this energy every four years and then it just dies.” The goal is to create permanent pressure on those in office, and offer alternative candidates who can change the political climate.

United Working Families recruited a strong slate. Patel stressed that they sought out candidates “emerging from grassroots organizations and unions, who are on the ground organizing on issues, not just in the political realm.”

They include “people who were involved in the issues long before they decided to run for office,” she said.

United Working Families hosted one of several community forums on the West Side, where CTU member Tara Stamps is running to unseat Emma Mitts on the city council, who’s known for bringing Walmart to the 37th ward.

The coalition has given training and support to Stamps and the other CTU candidates. Another is Susan Sadlowski Garza, a 19-year school counselor from the South Side’s 10th ward.

But with support from United Working Families, AFSCME and CTU, where she sits on the executive board, Garza has had as many as 67 canvassers a day out knocking on doors for her candidacy. She stresses that Emanuel’s education cuts affect everyone in Chicago, not just teachers or public sector workers, because students suffer—for instance, from not having enough counselors.

In her ward, Garza said, the buzz is out there for the new progressive labor coalition. She points to the mayor’s unpopularity among everyday Chicagoans. “Every single union member I’ve spoken to, whether it’s a laborer, a steelworker, or an auto worker,” she said, “everyone is showing interest in being part of United Working Families.”

UPDATE: Since this article went to print, Rahm Emanuel has announced endorsements from 15 Chicago unions, representing 70 locals. They include UNITE HERE local 1, Chicago and Cook County Building Trades, and the Teamsters Joint Council of Chicago.