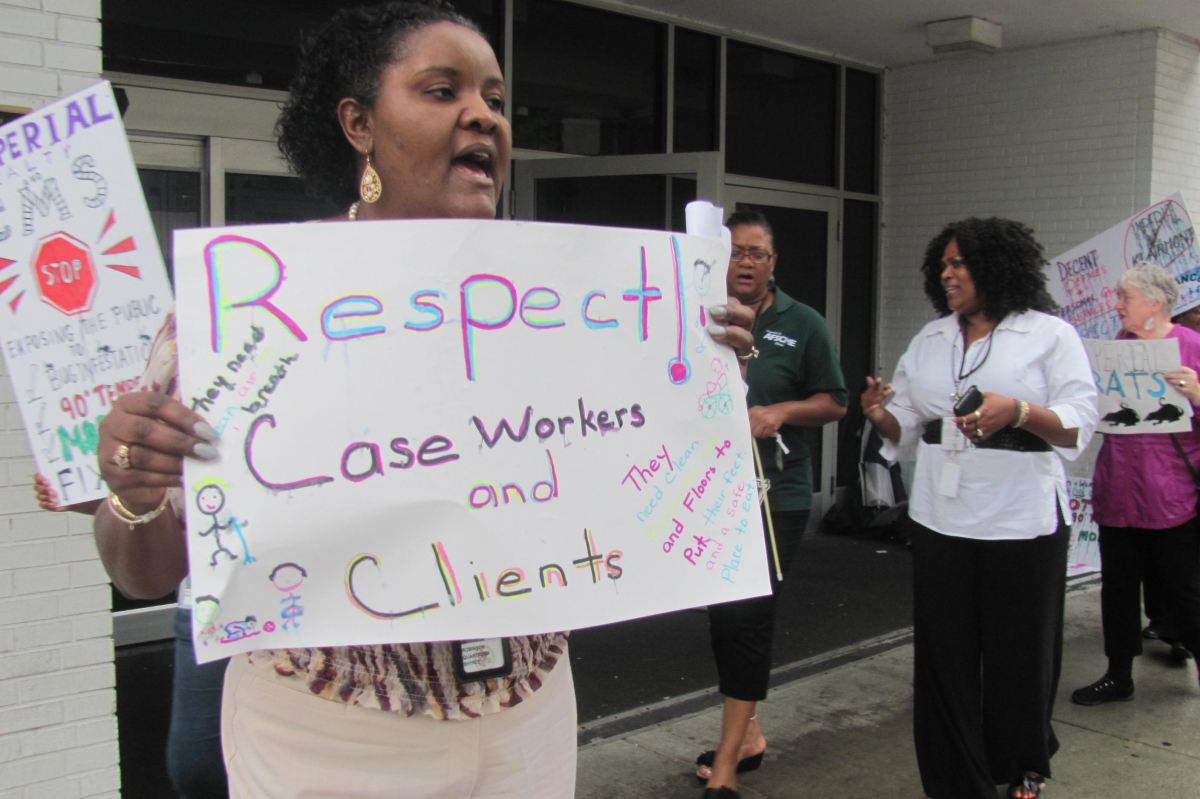 Pressure from a coalition of staff and consumers forced Illinois to phase out a private company and hire 1,000 more caseworkers. Photo: Alliance for Community Services.

Protests have brought together an unusual alliance in Chicago. Recipients of public benefits and state public aid employees alike wielded toilet brushes and “scrub Maximus” posters. Picket lines demanded an end to privatization (with the company Maximus) and improvements to benefits and services at the Illinois Department of Human Services (DHS).

This unity between workers and their clients has come about as disaster strikes them both. In Illinois, “austerity” has meant closure of dozens of offices, inadequate staffing and facilities, and imposition of a “task-based” service model, trying to look like a for-profit business.

As a result, people in need of services in some parts of Illinois now have to drive across two counties to address a problem with their Medicaid or food stamps. Some offices in Chicago have also been shuttered.

‘PUT THE HUMAN BACK IN’

Because of two decades of bipartisan underfunding, human services caseloads in Illinois have exploded from several hundred to 2,000-3,000 per worker, meaning less time and more tensions between caseworkers and recipients. Illinois has one of the lowest state caseworker-to-consumer ratios.

In 2012, claiming it would save $700,000, the state moved to close the DHS office in the Wicker Park neighborhood on Chicago’s North Side, sending thousands of needy consumers to the already overcrowded and inadequate Humboldt Park office. At the same time, legislators handed an $85 million tax break to the Chicago Mercantile Exchange.

Recipients joined forces with frontline workers to try to keep the Wicker Park office open. Pickets, community forums, and a half-day occupation of the office of the public leasing agency, Central Management Services (CMS), extracted some accommodations and cleanup of hazardous conditions at the Humboldt Park location.

But the protests were not enough to keep the Wicker Park office from closing—much less turn the tide of closures and budget cuts. A stronger coalition was needed.

So in 2013, benefits recipients from North Side Action for Justice and IMPRUVE, a group of people with disabilities, along with frontline state employees mainly from AFSCME Local 2858, created the Alliance for Community Services. We aimed to organize recipients together with public workers and “put the human back in Human Services.”

We picked three main issues that affect both consumers and staff: contracting out to for-profit companies, assembly-line-like changes in how staff connects with clients, and unsafe, filthy, infested offices.

Our fight against outsourcing targeted the for-profit Maximus Corp, which had received a $76 million contract to review eligibility of Medicaid recipients. AFSCME Council 31 filed grievances for improper outsourcing of state work.

We focused on the harm Maximus was doing to Medicaid recipients: tens of thousands of eligible people were wrongfully cancelled, and Maximus tried to cancel even more. Through this, the Alliance for Community Services was able to organize recipients against privatizing state jobs.

“I found out how bad Maximus is, firsthand,” said Deborah Taylor in July at an Alliance Town Hall meeting, where 200 people directed their frustration at the two state legislators and the DHS secretary.

“They canceled my medical card, and I had nobody to work with me to fix the problem.”

When people hurt by Maximus spoke up, they reframed the privatization issue—this was a corporation making profits by cynically denying benefits to eligible families, not a narrow labor-management dispute.

As a result of the arbitration and the pressure from the union, the Alliance, consumers, and other advocates, the state was forced to phase out Maximus and hire over 1,000 more caseworkers.

Meanwhile, the Alliance also began drawing attention to the harmful ways our jobs are being redefined. The Illinois DHS—inspired by Republican policies in Arizona and Indiana—used a planning grant from the Ford Foundation to change caseworker job descriptions in five pilot offices.

In the pilot program, caseworkers no longer have caseloads and face-to-face relationships with consumers. Instead they work in call centers, completing a series of tasks. Technology is used to closely monitor employees and their conversations with recipients, determine the amount of work they are doing, and control when they go on breaks.

The “task-based” system breaks any relationship between customer and staff, deskills the job, and paves the way for more privatization.

“Give me back a real caseworker, someone that can really help me,” testified community member Anne Crowe at the Alliance forum in February. “I have to go in to the DHS office several times and see someone different each time. And the computer system can’t keep track of my documents. Waiting times are longer and there’s nobody there assigned to me.”

State Representative Kelly Cassidy, after hearing testimony from both workers and consumers, declared it “inhumane.”

To disguise the problems, some work has been shifted from the “task-based” pilot offices to others, making backlogs seem reduced. At one office, trainees were assigned as “greeters” whose job was to encourage consumers to go home and call in, rather than fill the waiting room.

We’ve also been battling over the physical condition of the offices. The state leases office space from politically-connected realty companies. CMS, which signs the leases, is reluctant to require millionaire landlords to comply with health and safety conditions.

One Chicago DHS office had a gas leak for two weeks while management refused to acknowledge the danger to employees and consumers.

The Humboldt Park office had asbestos, which was not handled properly during a renovation, exposing employees, consumers, and workers to hazardous materials. Officers from the local contacted building trades unions. They confronted the landlord and demanded that he hire union labor, with safety protections, to complete the renovation.

Four hundred employees from several neighborhood offices were merged or hired into a mega-office at 5050 North Broadway to save the state money. The office had no air conditioning for a year, and temperatures rose into the 80s during the summer. The office spaces had been unoccupied for a number of years; employees worked in areas with bedbugs in the dirty carpets, mold from lack of ventilation, and lacking adequate toilets or facilities for those with disabilities.

CMS didn’t plan, so the mega-office has created congestion and traffic jams in the neighborhood. The Alliance and union members approached the local block club, alderman, and state legislators to pressure the landlord and CMS to negotiate a resolution to the lack of parking. The Alliance went door-to-door in the neighborhood collecting over 200 signatures on a petition demanding off-street parking for the facility.

With a steering committee of both consumers and employees, the Alliance and the local are able to focus on issues affecting both sides. The unity means we can have a broader impact and can strategize about longer-range battles.

“I was so surprised and impressed to find out that the state employees actually cared about our issues, not just their jobs,” said consumer Kathy Powers. “It helped me realize we should work together and not blame the person across the table for bad policies.”

Diane Stokes is president of AFSCME Local 2858 and Francis X. Tobin is coordinator of the Alliance for Community Services.

A version of this article appeared in Labor Notes #428, November 2014. Don't miss an issue, subscribe today.
Related
‘No Contract, No Matisse’: Philadelphia Museum of Art Workers Win First Contract After Strike »
Viewpoint: Support Veterans by Defending, Not Defunding, Public Sector Jobs at the Post Office and the V.A. »
Review: How Labor Can Stop ‘The Privatization of Everything’ »
Puerto Rican Electrical Workers Union Fights Privatization of Island’s Grid »
Ten Thousand UAW Members Gear Up for a Strike Vote at John Deere »