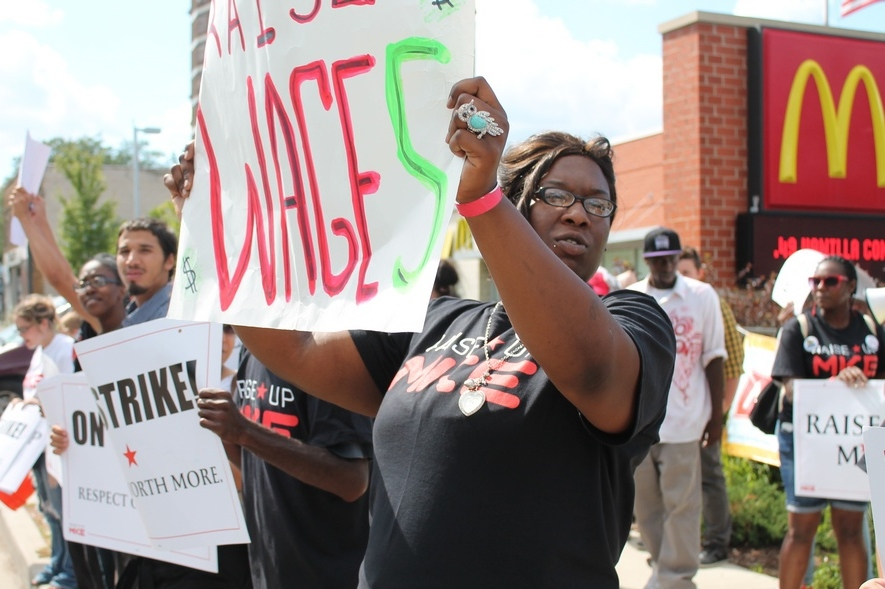 McDonald’s workers demanding “$15 and a union” have reason to cheer. A move by the National Labor Relations Board (NLRB) Office of the General Counsel on July 29 throws a big wrench in the corporation’s franchise system and could open the door to more worker organizing.

The news follows several one-day strikes by fast food workers, most recently in May, when restaurant workers walked off their low-wage jobs in 150 U.S. cities in a campaign coordinated by the Service Employees (SEIU). Workers charge that on top of paying unlivably low wages, the restaurants break the law by stealing wages and retaliating against those who speak up.

While 761,000 people work for McDonald’s in the U.S., they have more than 3,000 different bosses. These bosses are franchisees—individuals or companies that pay McDonald’s for permission to use the brand and set up shop. McDonald’s also directly operates 15 percent of its stores.

Individual franchisees have little power over how to operate the restaurants. They sign an agreement to follow McDonald’s guidelines and even to purchase supplies only from the corporate office, where menu item prices are also set.

For McDonald’s, the largest burger chain in the world, it’s a dream deal—guaranteed income without having to shoulder the risk of, say, getting caught breaking labor laws. They’re free to plead ignorance, much like employers who hide behind layers of subcontractors.

Supposedly franchisees decide workers’ wages. But in reality headquarters controls wages “by controlling every other variable in the business except wages,” explains a report from the National Employment Law Project. It’s no coincidence those wages all hover around the minimum. So if workers want to raise the wage, they’ll have to get the corporation to the table.

By calling McDonald’s a “joint employer” with its franchisees, the General Counsel—that’s the prosecuting side of the NLRB—sided with workers, who argue the corporation exerts so much control over store operations that it should be held accountable for what happens under its Golden Arches. The agency’s judicial side—the actual Labor Board—is independent of the prosecuting side, so there’s no guarantee it will ultimately agree with this interpretation.

But this is a big first step. Several dozen unfair labor practice claims, alleging unpaid wages, work off the clock, and retaliatory firings, have been on hold in local NLRB offices across the country. The General Counsel’s announcement will clear the way for local NLRB offices to hold the corporation, not just franchisees, accountable for the workplace abuses. That should help turn up the heat on corporate.

If rulings start coming out against the corporate office, that should help turn up the heat on McDonald’s. Maybe enough to push them to cut a deal with the union.

Though the news is good, it probably doesn’t mean workers will soon be negotiating their working conditions with McDonald’s Corporation. After all, fellow low-wage employer Walmart directly operates its stores—yet unions have been unable to keep a toehold there.

Just before the NLRB announcement, fast food workers held a convention, underwritten by SEIU, near McDonald’s headquarters in Chicago. There 1,200 workers from many fast food chains, including McDonald’s, Burger King, and Taco Bell, pledged to escalate their tactics, including to civil disobedience.

These workers are in for a long fight, but there are victories they can look to for inspiration. It’s not impossible to win agreements that bring three groups—in this case the corporation, the franchisees, and the workers—to the table.

After five years of organizing, farmworkers in North Carolina tobacco fields forced R.J. Reynolds Tobacco Company to the table in 2012. They used a sustained attack on the Reynolds brand to get the attention of both growers and the corporation that buys their crop. This summer they’re upping their organizing, seeking to produce enough pressure to actually win a joint contract, as other farmworkers have done.

Tomato pickers in Immokalee, Florida organized in the fields and with allies for decades before finally winning three-way contracts with growers and the fast food chains that buy from them.

The same possibility exists at McDonald’s and other franchised fast-food corporations. Some day we may see multi-sided contracts crisscrossing the whole fast food supply chain, uniting farmworkers, meatpackers, truckers, and retail workers against a single brand. But it’s going to take a lot more than the NLRB’s opinion to get there.

A version of this article appeared in Labor Notes #426, September 2014. Don't miss an issue, subscribe today.
Julia Kann is a staff writer for Labor Notes.julia@labornotes.org
Related
Viewpoint: Burgerville Workers’ Lessons for Independent Unions »
How Zoomers Organized the First Chipotle Union »
Viewpoint: New York’s New Law Covering 67,000 Fast Food Workers Is a Leap Forward for Just Cause for All »
Striking McDonald’s Workers Block Entrance, Shut Store »
With a Little Help from My Friends: How Taco Bell Workers and Many More Are Self-Organizing in the Pandemic »