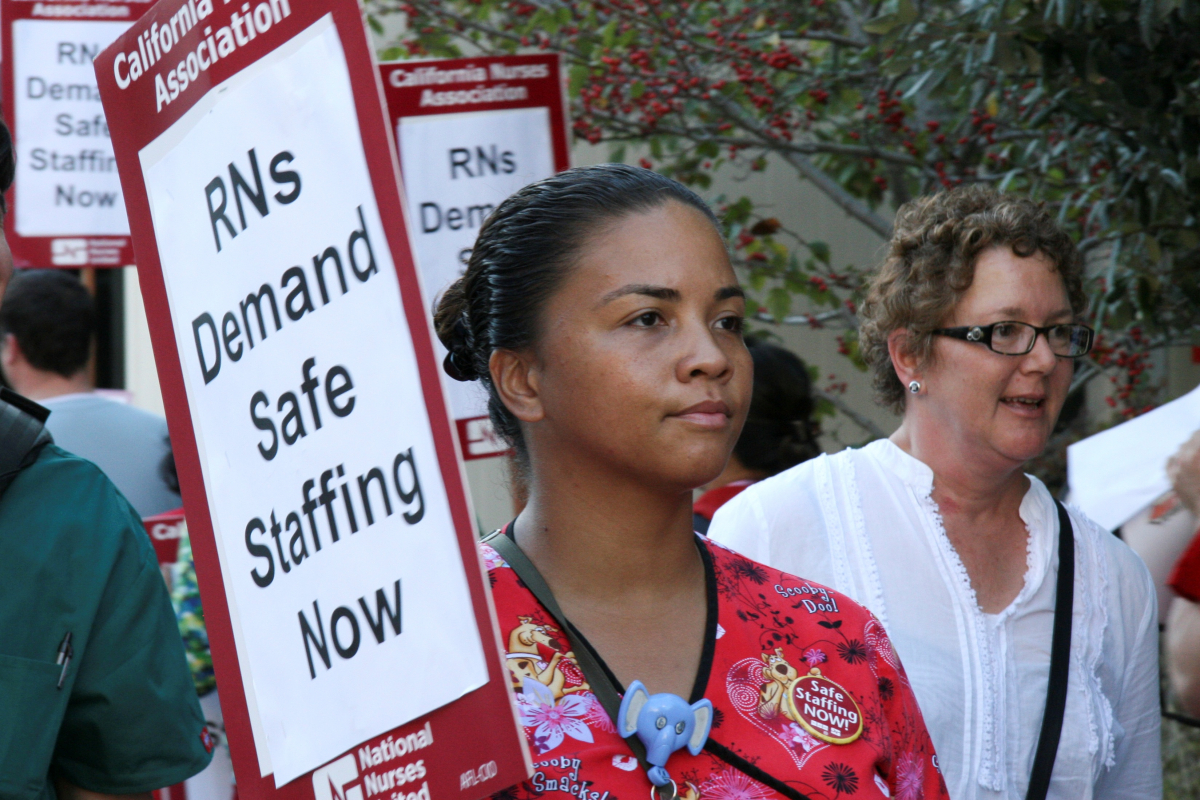 Nurses around the country are denouncing excessive overtime and demanding more staff. In one hospital they went a step further and refused any overtime. Photo: CNA.

Nurses in the emergency department where I work have been struggling to improve staffing for years, but we finally got some motion from management when we stuck together and said no to overtime—any overtime.

Working in one of the country’s busiest urban public hospital emergency departments can be stressful. An average weekday brings 350 adults through the doors. Registered nurses here are commonly responsible for six or seven patients at a time, and on busy days, up to eight or nine. This ratio is not healthy for patients.

Inadequate staffing has resulted in an assembly line approach. Jobs are broken down into parts. Patients are shoveled through the machine. The medical director is obsessed with “length of stay” and other statistical measures which say very little about the care provided. There’s a rush to discharge or admit patients as quickly as possible.

To save time, studies show, the first thing skipped is patient education. But discharge instructions are one of the most important things a nurse does. How else will patients understand their diagnosis and how to care for themselves once they go home?

The staffing shortage grew so severe in spring 2011 that we went to the hospital’s safety committee with a petition signed by nurses across three shifts. We testified about unsafe conditions.

Our department generally deals with short staffing by spending millions a year on overtime pay. After we testified, management’s solution was to remove its own overtime limit for the year: instead of 624 annual hours per nurse, we could work unlimited overtime in 2011. This stopgap measure is dangerous. Nurses working so many hours are fatigued and prone to make errors.

At the hospital system’s holiday party that year, several of us confronted the president of the county’s elected board. Flustered, she grabbed the chief medical officer to talk to us, and fled. This doctor connected us with the new CEO, who came and met with us in January 2012. He said he would look into the problem, but needed time to figure out a solution.

We had to raise the issue of safe staffing again that March. This time we brought our petitions to management’s bosses, the elected representatives of the county. The frustrated CEO came to the ED the next day to inform us that the overtime cap would be removed again—unlimited hours for 2012. He again assured us that the staffing problem would be fixed, but that he needed more time.

The problems continued. To make matters worse, by summer 2013, in bargaining with the nurses, the county’s lawyers were proposing overtime calculation changes. They wanted to stop the practice of counting holiday and vacation hours toward the overtime total, used to entice nurses to work more hours during those weeks.

It may not involve a large sum of money, but it’s an insult to nurses who are already away from families on many holidays. After all, people don’t stop being sick on Christmas or Thanksgiving.

A few of us began talking about how we needed to take more drastic action than simply testifying and petitioning. We decided to hit management where it was weakest. If its only solution to short staffing was to have us work more overtime, what if we decided to not work any overtime at all? Mandatory overtime is not legal in our state.

Our workforce reflects the diversity of our patient population, helping us meet language and cultural needs. But the diversity also has its challenges, when workers echo our society’s racist and anti-immigrant ideas.

I heard outrageous excuses why it wouldn’t work: “Those Indian nurses are made to work overtime by their husbands, and they won’t go against them.” “Those Filipino nurses work so many hours because they are greedy, you really think they’ll go for this?” “The Nigerians are each supporting 10 families back home, they need the money too much to go along.”

Those who’d expressed these prejudiced views were truly surprised when I’d come back and say that someone from another ethnic group said a one-day overtime boycott wasn’t enough, and we should refuse to sign up for an entire week!

A second fracture point was that three different unions represented the workers we hoped would participate—and two of them had a history of conflict. In 2008 the nurses union and the union that represents paramedics, janitors, and transporters each tried to decertify the other, part of a larger fight between their national parent unions. While there was never really conflict between the rank-and-file workers, the unions ran heated campaigns, which fortunately never came to a vote.

Still, on the overtime boycott, it was simple to make the argument: we could either stand together or fall divided. We never went through the official union leadership channels, but we all agreed we could only benefit from backing each other up. Licensed practical nurses and ED paramedics joined the RNs in refusing to sign up for overtime, adding almost 40 to our ranks.

A final weakness was the state of our nurses union. Although our local had changed its affiliation to join a more militant and activist union a decade before, it’s been a struggle to get nurses active. Some still saw the union as just an insurance policy. But we had built members’ confidence by starting with less controversial actions such as the petitions, then escalating up.

Management’s over-reliance on overtime became its weak point when we exercised our legally protected right not to sign up. Among the 150 workers we targeted, none signed up to work more than their regular shifts for the five days we had agreed upon. The overtime sheet was completely blank.

Managers’ first reaction was confusion. They could not understand why no one had signed up for these days in particular. Many of us wrongly assumed that they would either give in or make some arrangements to secure outside staff.

Monday arrived: a complete mess. A 16-bed section of the department was completely shut down. Doctors, residents, and medical students sat around, unable to see patients, because there were not enough nurses.

The area where ambulances arrive and medications are refilled also had to be closed. Ambulances bringing patients with heart attacks or strokes were sent to the private hospital next door. In the operating rooms a similar action was organized and 20 elective surgeries had to be rescheduled.

Managers begged, threatened, and pleaded with us to stay and work overtime. We all stood firm.

Yes, patients faced long wait times—three hours just to reach the first step of triage—but the blame clearly belonged to hospital administrators. We had made them aware of the staffing problems for two years. And two weeks beforehand, their overtime sign-up sheet had five blank days.

On Tuesday it was the same story. Despite how hard it was for those of us scheduled to work, and the impact it was having upon our patients, we could feel our collective power: this place runs because of us.

While our immediate supervisors were trying to solve the problem, top management ignored it. The system’s second-in-command emailed ED managers that they wouldn’t meet with nurses because we hadn’t gone through the “proper channels.” Some nurses began to get nervous, not sure they could go through with this for another day. We debated among ourselves, and decided to continue.

After I left work on Tuesday, I got a call: upper managers had changed their minds. They wanted to meet and discuss the situation.

I returned to work. A dozen of us met with the chief nursing officer and the head of human resources. They listened to our grievances and agreed to expedite hiring. After the meeting we went through the ED, polled the nurses, and agreed to go back to signing up for overtime.

Since then, about eight nurses have been hired—but this barely keeps up with those who have retired. We still don’t have a contract after 17 months of negotiations. And management still hasn’t taken the overtime changes off the table. Nevertheless, the lesson was seared into everyone’s minds: when we stick together, our power can’t be ignored.

Meanwhile, news about the action spread across the hospital. If it has to happen again, next time the overtime boycott will take place in more than just two departments.

Dennis Tong is the pseudonym of a registered nurse and union activist at a large urban hospital.

A version of this article appeared in Labor Notes #424, July 2014. Don't miss an issue, subscribe today.
Related
Stung by Ascension's Union-Busting, Michigan Nurses Gird for Contract Battle »
A Nurse’s Story: My True Cost of the Pandemic »
Labor Must Rise Against Vaccine Apartheid »
Striking Massachusetts Nurses Outwait Corporate Giant Tenet »
Whatever Happened to 'Eight Hours for What You Will'? »