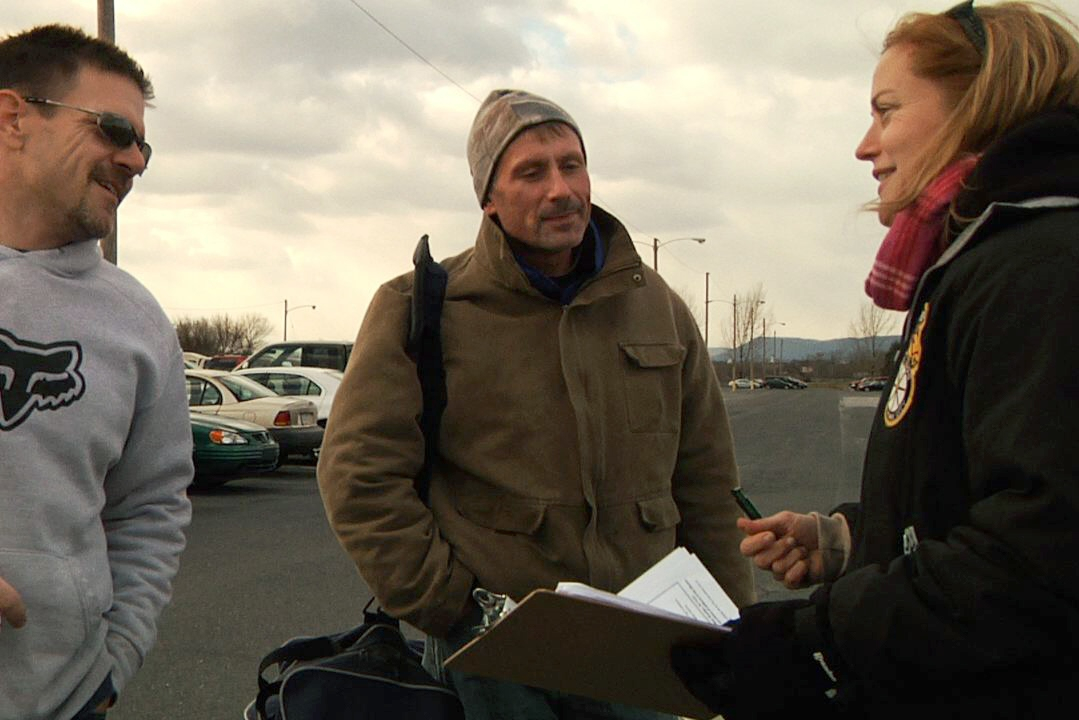 Local 805 President Sandy Pope campaigned against Hoffa in 2011. Teamster brass face a different outlook this time, as the 2016 election approaches amid a wave of member anger at concessions. So they're taking aim at members' right to vote. Photo: TDU.

Facing fresh member dissatisfaction, Teamster President James Hoffa and his Secretary-Treasurer Ken Hall are headed to court to try to make contested Teamster elections a thing of the past.

Whether they succeed will determine the future of one of North America’s most powerful unions. Will it continue to manage decline and concessions, or tap the power of organized transport and distribution workers to reverse them?

The 1.25 million-member International Brotherhood of Teamsters (IBT) is unique among the largest North American unions in that every five years it has a hotly contested rank-and-file election for the top leadership.

The right to vote is protected by a 1989 consent order, a court-approved agreement that Teamster officers reluctantly accepted to avoid a racketeering trial.

In that landmark legal case, the reform movement Teamsters for a Democratic Union intervened to oppose court-imposed government oversight of the union’s operations. Instead, to root out systemic corruption, TDU proposed that members directly elect top officers.

The election rocked not only the Teamsters, but the labor movement. The first-ever contested election in the AFL-CIO quickly followed.

After Carey won again in 1996, defeating Hoffa, he led UPS workers out on strike in 1997. With bold demands such as 10,000 more full-time jobs (with the rallying cry, “Part-Time America Won’t Work”) and innovative tactics that evolved over the year of rank-and-file organizing leading up it, this strike started to put labor on the offensive.

That success was tragically cut short later that year when aides to Carey were found engaging in illegal campaign fundraising. The scandal paved the way for Hoffa’s rise and the old guard’s return to power.

Now the Hoffa administration has taken the first step to try to end the consent order by submitting a letter to federal judge Loretta Preska. The IBT claims the consent order is no longer needed because the union is reformed.

The U.S. Attorney and TDU have submitted letters opposing the change. TDU is also intervening in the court proceedings and has launched a campaign to defend the right to vote.

TDU agrees that mob control of the union has diminished—precisely because the right to vote has given members a tool to tackle corruption and hold leaders accountable.

Other unions have membership elections in their constitution, but what makes the Teamsters unique is independently supervised elections, coupled with an organized national reform movement of leaders, activists, and members. It’s TDU that gives life to members’ right to vote.

Hoffa and Hall claim their goal is to end government oversight. But their real target is the one-member, one-vote elections.

To be clear, there is no “government oversight” of any of the union’s operations—not bargaining, political action, organizing, contract campaigns, budgets, salaries, or hiring and firing.

Instead, the consent order provides for an Independent Review Board, selected by IBT leadership and the U.S. Attorney, to bring corruption charges against individual officials. And it provides for the right to vote for international officers under fair election rules.

Both are important to members, but the right to vote is the most critical.

Without these rules, the current leaders will be free to change nomination requirements to make it impossible for opposition candidates to get on the ballot.

Currently, nominations for top offices require 5 percent of elected convention delegates. But the incumbents want to raise that bar.

Every challenger to Hoffa has met the 5 percent requirement, but none would have been nominated if 10 percent were required—though each, once nominated, ran a competitive race and forced national debates on the union’s direction.

Teamster leaders have already amended the IBT constitution so the board can write its own rules for any election and pick the election supervisor. For now, these amendments are trumped by the provisions of the consent order.

But if the consent order were lifted, these safeguards would go out the window.

So would election rules that partially level the playing field by providing opposition campaigners’ access to employer parking lots, “battle pages” of campaign material in the Teamster magazine, and fair rules for delegate elections.

Hoffa and Hall have good reason to make this move now. Hoffa, who won reelection in 2011 with 59 percent of the vote, faces a different political outlook as the 2015-2016 campaign approaches.

Over the past year, the majority of members in the freight industry, UPS Freight, and UPS have all voted to reject concessions in their contracts—only to have them imposed by Hoffa and Hall.

The Vote No movement helped launch a new formation, Take Back Our Union, that’s already organizing meetings to plan for the 2016 election.

Hoffa won most of the UPS locals in 2011. But his prospects among that group of 250,000 Teamsters look much dimmer today. And dissatisfaction is not limited to just UPS and trucking Teamsters: Hoffa’s policy of retreat has led to defeats and lackluster organizing in warehousing, delivery, public service, airlines, and other Teamster fields.

Take Back Our Union has started to forge a coalition of the opposition forces in the union, bringing together TDU, which backed New York Local 805 President Sandy Pope in the 2011 election, and other local officials who ran on a separate slate.

Combined, these contenders won 41 percent last time—and that was before this wave of membership anger at concessions.

Once again, members are gearing up to take the wheel of the union.

Ken Paff is the national organizer of Teamsters for a Democratic Union, www.TDU.org

Related
At a Convention Like No Other, Teamster Challengers Turn a Corner »
No One Else Was Going To, So These Teamsters Saved Their Own Pensions »
Opening the Door to a More Democratic UAW »
It's Been a Long Nightmare Before Christmas for UPS and Postal Workers »
Auto Workers to Vote on Direct Elections »