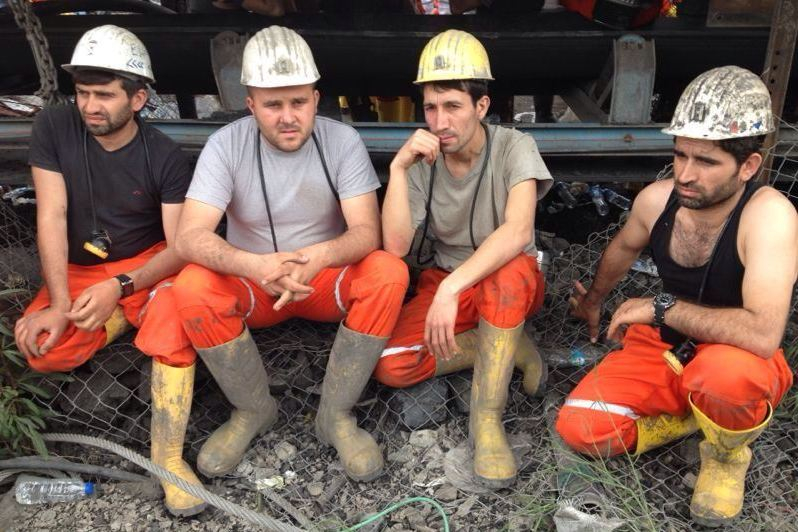 Coal miners in Soma waited for news from rescuers after the biggest workplace disaster in Turkey's history. The prime minister has sparked renewed protests by defending the company, which had boasted of its cost-cutting business model. Photo: Hilmi Hacaloğlu (VOA).

People in Turkey are sad and angry.

At least 300 workers lost their lives in the May 13 mine accident in Soma, a small town 300 miles from Istanbul. It was the biggest workplace disaster in Turkish history.

But instead of punishing management and promising to improve safety, Prime Minister Recep Tayyip Erdoğan has openly defended the company.

Not just in Soma but in all parts of the country, people are angry and mobilizing against the government. The ruling Justice and Development Party (AKP) has reacted with police violence, pepper gas, and water cannons.

A May 15 general strike called by several union federations was one of the biggest strikes in years. Last summer, protesters defending Istanbul’s Gezi Park against bulldozers touched off national protests against the Erdoğan regime and its pro-business agenda, with significant union participation.

In Soma and in surrounding towns and villages, almost everyone lost at least one relative, friend, or neighbor in the mine explosion. Officially, 301 miners died, but locals believe the real number is 500-600.

There are towns where more than 100 miners were buried. There are people who lost up to 11 relatives. There are families that lost both a father and a son.

The government and the company cannot state an exact number of workers who were at the mine at the time of the explosion, 3:15 p.m.; they estimate 780. Normally workers go down to the mine by using their ID cards, but there may also be informal workers who don’t use ID cards, so their numbers are harder to guess.

One TV channel asked all municipalities around Soma their registered number of miners’ funerals and found 321, but that number is just for towns; it does not include many miners who were buried in their villages and in other parts of the country. A worker in a makeshift morgue in nearby Kirkagac, just one of the morgues for miners, said he registered 346 dead.

People waited outside the mine to check whether rescued miners were alive or dead. Later it came out that the government’s rescue team was putting oxygen masks on all miners, dead or alive, to give the impression they had survived.

People are also concerned that there won’t be an independent, fair legal investigation. The government has fueled suspicions by building a wall at the entrance of the mine May 18, by not letting journalists and members of parliament (MPs) in to investigate, and by not letting the public prosecutor work independently from the start.

Opposition parties, MPs, lawyers, journalists, and non-governmental organizations are working hard to check the government’s list of dead miners and to determine the real number of dead and injured miners by visiting all the villages and towns.

But police and army forces are making it difficult. Only MPs can pass some checkpoints. The company and local officers of the ruling party are threatening people into silence. People are frightened to lose their jobs, because in that region, the only job opportunity is the mines.

How has Prime Minister Erdoğan reacted to this tragic incident? Did he resign? Did he cry? Did any of his ministers—for instance, the ministers of energy or labor and social security—or any low-level state officer resign? Did he find a scapegoat? No, he even didn’t do that.

During Erdoğan’s visit to Soma, he slapped a young man and his guards hit the man hard because he was protesting against Erdoğan. His advisor kicked another protester who was under the control of two policemen; his police attacked protesters with pepper gas and water cannons.

One miner’s cousin told a TV channel that, because his cousin was poisoned by carbon monoxide in the mine, he would resist the pepper gas.

What made people in Soma so angry were Erdoğan’s statements calling such accidents normal and ordinary. His attitude was that “these things happen.” He gave examples from around the world, including 1867 in the Victorian U.K. and 1906 in the U.S. He defended the company, calling it exemplary on occupational health and safety standards, and calling accidents unavoidable.

Until recently the ruling party was very popular in Soma, winning 43 percent of the vote in the March 30 local elections. But after he made these statements, thousands joined a spontaneous protest against Erdoğan. He and his ministers had to run away from the town of Soma. People burned the party’s local office.

Students at universities and colleges boycotted their lessons on May 15, and the general public wore black shirts and dresses. Students occupied the Istanbul Technical University Mining Faculty for four days until May 19 to protest the university’s relations with the employer, which is on its advisory committee.

This mine had been managed by the state until 2005, when it was privatized.

Privatization of mines is legally different from other privatizations. It is a kind of subcontracting system, because under the Turkish constitution, all mines are owned by the state. They can’t be sold, but their management may be transferred to the private sector.

In this case the Soma Holding Company is responsible for the management. Its CEO told a newspaper in 2012 that the state had been producing one ton of coal for $130. By applying the “business style of the private sector,” he claimed, the company had been able to decrease this cost to $24 per ton, including the state’s profit share.

This demonstrates the real reason why hundreds of workers died.

The AKP government has close political and economic ties with Soma Holding Company. Workers could get hired at the mine via the local party office, which company management is involved in leading.

The company receives many royalty tenders from the government, transferring the mining sites to the private sector. It is also claimed that the company donates to Erdoğan’s son’s Youth Foundation.

Even the local union executive committee is said to be selected by the company and AKP. All opposition leaders in the union had already been dismissed before the explosion.

Occupational accidents are a major problem in Turkey. Laws and regulations are very weak, and so are unions. Workers lose their lives or become permanently incapacitated because management does not comply with easy safety measures.

There are 16 million wage earners in Turkey, 1 million of them union members, and many of those are not covered by collective bargaining agreements. (Individual workers can join unions, but bargaining is only initiated when the number of union members in the workplace or industry reaches the thresholds of 1 percent in the sector and 50 percent plus one in the workplace.) Fewer than 300,000 private sector workers have union contracts.

Over the last decade, 11,706 workers lost their lives in accidents at work. Ninety-seven percent of those accidents were considered avoidable: if proper occupational heath and safety measures had been applied, the workers would not be dead.

If we compare the figures with the European level, conditions in Turkey are desperate. According to Eurostat, in 2007 Turkey had 12.3 deaths per 100,000 workers. The European Union average was 2.1.

And these are just the deaths that could be recorded in registered workplaces. The real numbers are far more: in 2013, 38 percent of the workforce was informal. Monthly reports collected by a non-governmental group make clear that there are even more accidents and more deaths in the informal sector, especially in construction and agriculture.

Emre Eren Korkmaz is a Ph.D. student in political science and international relations at Istanbul University.