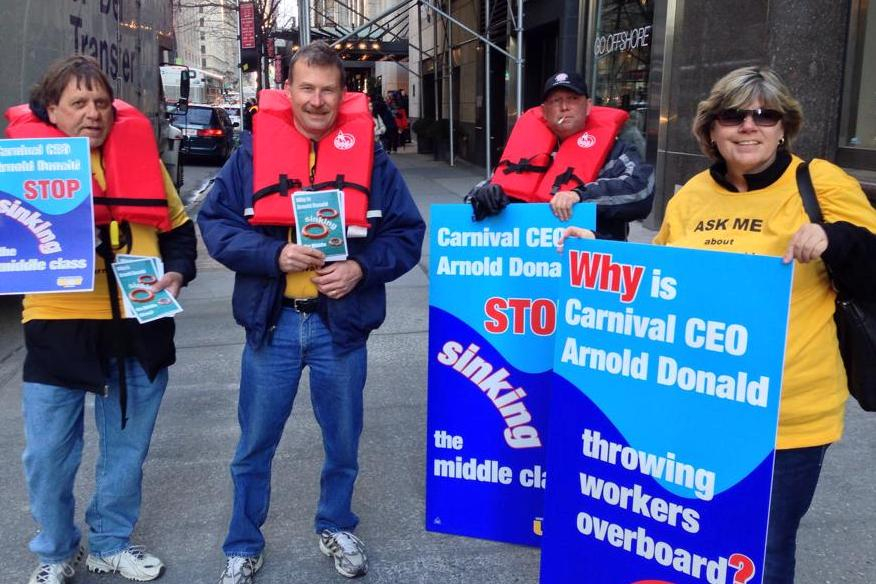 Steelworkers are holding the line against two-tier wages and pensions at a can plant in Toronto—ruining the plans of their employer, manufacturing giant Crown Holdings. In late March, after seven months on strike, workers voted against going back to work 117 to 1.

Crown has been trying to impose two-tier across all its union plants, said Stuart Deans of the USW. “It’s gotta stop somewhere,” he said. The Philadelphia-based company operates 149 factories in dozens of countries. About half its workers are unionized.

The Toronto plant, which is operating with scabs, produces 5 million beer and soup cans a day for Molson Coors, Labatt, Cott Beverage, and others. Output and quality have been down since the workers walked out, according to officials with Steelworkers Local 9176.

Strikers refused a contract giving new hires 42 percent less pay, a cut of around $9 an hour. “These young kids coming up, how are they going to make it in this lifetime?” said striker Cheryle Dollimore, a general laborer with 28 years at the plant.

Secondary boycotts are not as restricted in Canada as they are in the U.S., and the Steelworkers are taking full advantage. They are picketing Crown’s customers and targeting companies run by Crown board members.

One key Crown board member, Donald Arnold, is CEO of the cruise line company Carnival. On Wednesday, Dollimore and dozens of her co-workers picketed and a few spoke at a Carnival board meeting in New York City, telling the company that the million-member Ontario Labor Federation and the 500,000-member Congress of Union Retirees of Canada are boycotting Carnival because of Arnold’s role in forcing their strike.

The campaign has taken aim at the failings of Carnival cruises, with workers leafleting cruise ship boarding areas to highlight the company’s health and safety shortcomings, some quite infamous, including the Costa Concordia disaster and an on-board fire that left 4,000 passengers stranded in the Gulf of Mexico for five days, in what the Washington Post called a “floating Port-a-John.” The boycott covers all Carnival brands including Princess, Holland America, Cunard, AIDA, Ibero, P&O, Seabourn, and Costa.

The strikers even travelled to Turkey in search of allies, meeting with metalworkers who are organizing a Crown manufacturing plant there and planning an international strategy against Crown with the IndustriaALL global union federation. After the Turkish workers voted in the union, four were fired on bogus charges, and the USW joined other international unions in denouncing Crown’s union-busting.

When strikers picketed a Labatt brewery in London, Ontario, union members there were supportive because of their own experience with two-tier.

“They told us it was the worst thing they ever did, accepting two-tier,” said striker Bob Lapchuck, a 38-year maintenance mechanic. “They said there were more problems of division in the plant, more than even against management.”

Strikers said they thought Crown’s main goal was to break up unity and ultimately get rid of their union. But it’s been an expensive proposition. The company has been paying scabs double-time, strikers said. They noted that an ad for scabs on the Canadian jobs website Workopolis was offering new hires more than Dollimore made after 28 years.

They were also outraged at rumors that workers from Crown plants in the U.S. were being brought in to work and train other scabs. “They’ll say it’s just for instruction purposes, but that’s still illegal,” said Lapchuck.

Other scabs have come from a non-union Crown plant in Calgary. One scab lost a finger in an accident, strikers said, noting that their plant had been the safest Crown facility in North America before the strike.

Many Crown plants in the U.S. have already accepted two-tier, and in some cases three-tier, said the Canadian strikers. In early April the Machinists union approved a three-year contract in five widely scattered U.S. Crown plants, but the full contents of the deal are not public. “It must work for them,” said Dollimore. “Why sign anything that’s not any good?”

The offers at the Toronto plant, meanwhile, have gone from bad to worse. In the most recent return-to-work offer, “it’s almost like they can fire anyone who went on strike,” said John Beechey, a 30-year maintenance mechanic.

In 2012, the Toronto plant received an award for productivity and safety. “In the last two contracts we froze our cost-of-living adjustment and did lots of things,” said Beechey. “So we expected a pat on the back.”

“We gave them all they wanted, all the numbers, then they put us out on the street,” said Dollimore. By contrast, CEO John Conway received $12 million in compensation in 2013, including a $2.8 million bonus for meeting “economic benchmarks.” Strikers noted those benchmarks were achieved by cutting workers’ pay and pensions.

Their website, TakeBacksNoMore, features “Millionaires Row,” photos of the mansions of Crown’s directors.

The union has also been focusing wrath against Canadian public officials for not standing up for fair wages for younger workers. Two-tier “helps spread a low-wage economy in Ontario,” said Lawrence Hay, the local’s staff rep. The union has called on the province’s premier, Kathleen Wynn, to intervene in the dispute in order to defend younger workers’ wages.

CORRECTION: An earlier version of this article said secondary boycotts are not legal in the U.S., however reader Julian Gonzalez correctly points out that there are many ways to take secondary actions that do not run afoul of the law.