Postal Unions, Teachers Turn Up the Heat on Staples 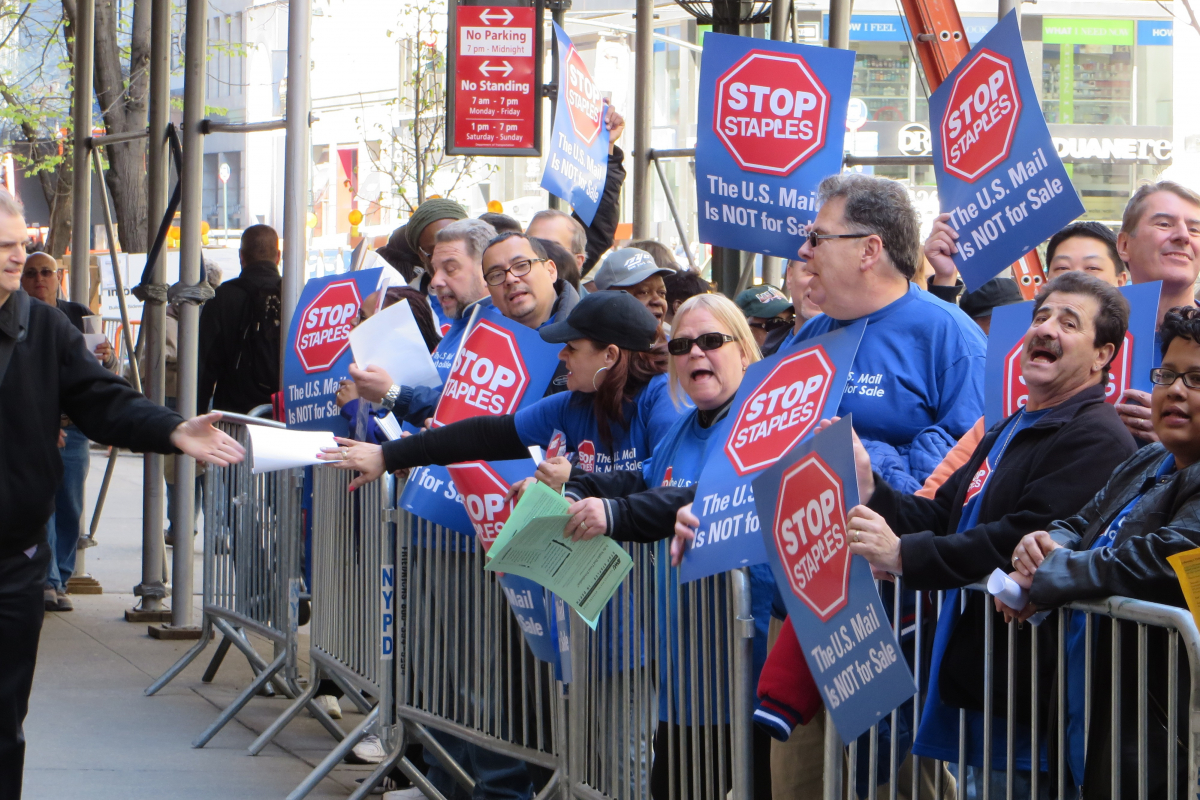 Postal workers rallied in 56 locations around the country yesterday, protesting the piecemeal outsourcing of postal work to the low-wage retailer Staples.

In Manhattan, the crowd rallied at a midtown post office, then marched to a Staples store near the Empire State Building, where they leaned across the low protest fence to hand leaflets to customers and pedestrians.

Last year Staples and the U.S. Postal Service launched a pilot program to accept packages at “postal units” inside 82 stores in four states—staffed non-union by the big-box retailer. Their plan is to expand the program to all 1,600 Staples locations.

The APWU, which represents 200,000 postal clerks, maintenance workers, and drivers, is escalating its fight against the scheme.

“When we were hired, we took an oath to protect the sanctity of the mail,” said Diane Erlanger, an American Postal Workers Union (APWU) delegate and sales service associate at the post office. Staples won’t give the same rigorous training, she said. “Packages will be put in unsecured places... It’s just a business to them. For us it’s a service to the American people.”

Postmaster General Patrick Donahoe claims his goal is to expand the public’s access to postal services—but if so, the rest of his behavior is a funny way to show it. He cut the deal with Staples while continuing to push wave after wave of closures of post offices and mail plants, despite local outcry in many affected areas, and he keeps trying to end Saturday delivery.

“The truth is, Donahoe must go!” said New York Metro Area APWU President Jonathan Smith. “The postal service is a service to the American people, given by the Constitution, and he has turned it into a for-profit operation.”

’Destroyed from the Inside Out’

New York’s protesters included members and local officers of the APWU, NALC, and Mail Handlers unions, along with community activists. After years of dischord, the four postal unions announced a new alliance in March, pledging to work together to defend the public postal service against cuts, privatization, and subcontracting.

The alliance comes not a moment too soon, as all four unions fight for their survival. Even those post offices that have survived the waves of cuts are feeling the crunch of understaffing.

Lines go out the door, and 45-minute waits are the norm with only one or two windows open, said Kevin Walsh, the New York local’s director of organization. “Our biggest supporters have always been the customers… but things like this make customers irate,” he said. “The customer sees this and says, ‘Maybe they do need to be overhauled and privatized.’ This is being destroyed from the inside out.”

Why sabotage the post office from within? Because it’s a cash cow for the unscrupulous profiteer. Though a 2006 law created the accounting illusion that postal services are losing money—USPS is required to prefund retiree health benefits 75 years in advance—in fact, business is booming. Letters are down, but packages are up in the age of online retail.

Unlike for-profit companies, USPS as a public service is mandated to deliver everywhere—and to charge everyone the same rates. Its traditional competitors UPS and FedEx don’t have to do that. And now e-commerce contenders including Amazon, Staples, eBay, and Walmart are trying to get in on the action with a variety of new schemes to make delivery even cheaper (for them, not for you).

Amazon recently made headlines with a farfetched plan to deliver items by drone. But a new Huffington Post investigation found the real “drones” doing Amazon Prime deliveries are human beings getting $1.50 a door, minus their own gas and vehicle costs, independent contractors of a subcontractor—their jobs even more precarious and marginal than non-union FedEx drivers’.

Reports from across the country showed members of NALC and the Mail Handlers as well as APWU turned out for many local rallies.

More than 100 protesters distributed at least 1,000 flyers outside a Los Angeles Staples, said Kevin Cole of the Anaheim APWU. A posted sign announced this store would soon be closing. Staples, which is struggling financially, has said it will close 225 stores by 2015.

In Greensboro, North Carolina, over 100 people turned out for a picket that lasted nearly all day, said Richard Koritz of NALC Branch 630. In Pittsburgh, “there were lots of car horn salutes and thumbs-up signs from folks passing,” said Mel Packer. Protesters there included an angry woman who’d been kept on temp status for 11 years in a mail processing plant.

In Providence, a labor coalition called Working Rhode Island turned out members of various locals. “The Teamsters’ semi drove around and around the block, blowing its horn,” said Linda LaClair, a field rep for the National Education Association chapter.

Teachers are a particularly strategic ally in the Staples fight—they’re big buyers of office supplies for their classrooms, often paying the costs out of their own pockets. "Our informal surveys over the years have found the average teachers spends between $500 and $1,000 a year on supplies, due to the lack of them," said Fred Glass of the California Federation of Teachers. The executive council of the 120,000-member CFT will vote April 28 on a resolution urging its members not to buy from Staples.

Seniors and low-income people are especially reliant on the post office. The mail “isn’t supposed to be a business. It’s supposed to be affordable,” said Johnnie Stevens of the group Community Labor United for Postal Jobs and Services.

“You take a viable, working service out of the community and put in a store, a lot of jobs are going to be missing right away,” he said, “and it will affect us very badly as a community, as well.”

The average full-time worker at Staples makes $18,000 a year, APWU says. New hires are subjected to an anti-union video as part of their training. And a recent online petition by a Staples employee calling herself “Sue Whistleblower” drew attention to a company policy to cut part-time workers to fewer than 25 hours per week so they wouldn’t qualify for health insurance.

The Staples battle looks like a re-run of one the union fought—and won—25 years ago, when Sears announced a similar pilot program at 11 stores. Union members sent the corporation thousands of protest letters. Some cut up their Sears credit cards and sent in the plastic shreds. The company backed off, abandoning the program.

“It took us a couple months before they got the message,” remembered Eleanor Bailey, president of New York area APWU retirees’ chapter and a longtime community activist. She believes with Staples too, “if enough of the public objects, they will back out.”