How Labor Notes Can Help You 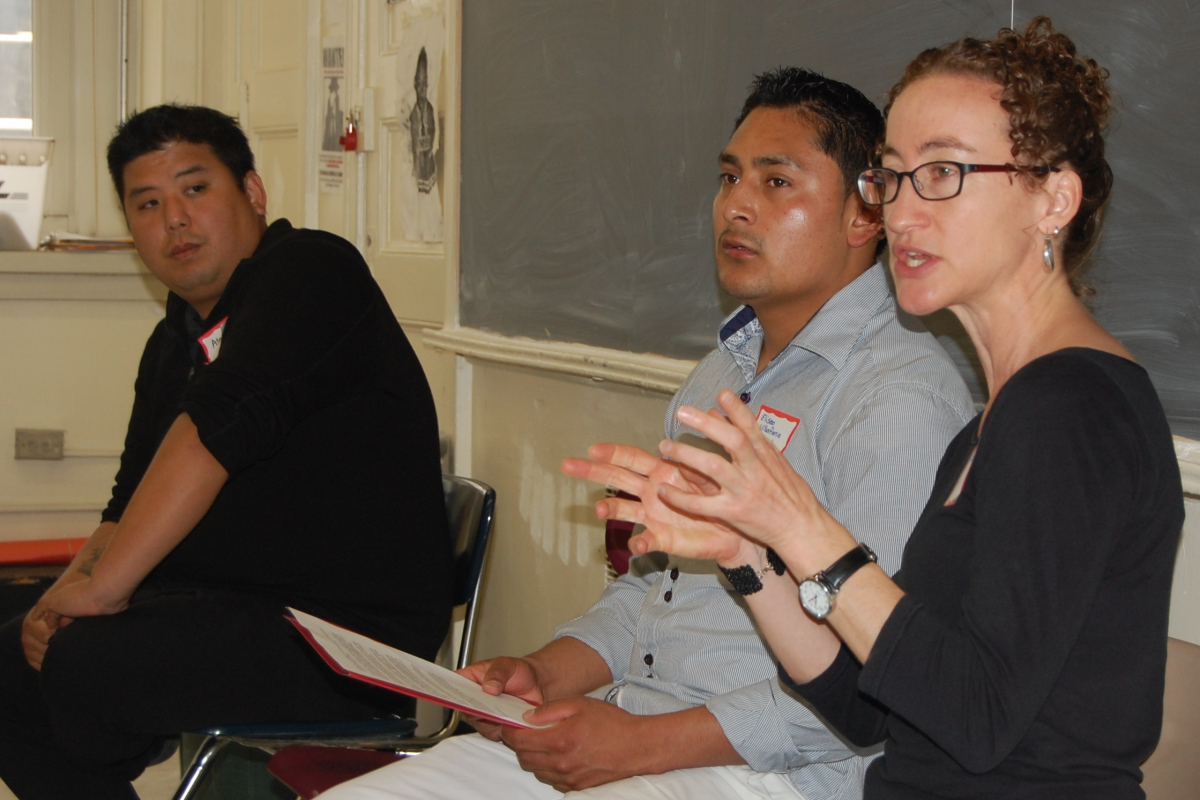 New Yorkers speak at a 2013 Troublemakers School. To plan a similar school in your community, contact Labor Notes. We'll give you the ideas, materials, and support to make it happen. Photo: Dan Lutz.

As an activist, one of the toughest challenges you come up against is your co-workers’ feeling that nothing can change. They can’t fight City Hall.

So you’re always trying to convince them they can—and one of your methods is to show them that people no different from themselves have organized a union, or taken back their union, or put the boss in his place.

Your best tool for doing that is Labor Notes. We asked some activists how they use the different parts of Labor Notes to perk up and educate their fellow workers.

Ron Lare uses it to poke Ford workers at the big plant outside Detroit. He has a texting group he sends articles to and a monthly meeting at a coffee shop where people can get a free copy of Labor Notes from his bundle.

He’s collaborated with fellow workers to write up articles for our blog about small victories. “We all know the phenomenon of ‘I thought I was the only one who x, y or z,” Lare says. “Labor Notes shows them they’re not.”

Other advantages of the monthly bundle: “It’s frequent and regular: you don’t know if you’re going to get a leaflet out in the next month, but you know Labor Notes is going to be there.

“You know the range of content it will have, which is broad enough to catch different kinds of people’s interest.”

And, “unless it has your workplace on the cover, it can get under the foreman’s radar. He looks at it, he isn’t interested, how much harm could it be?”

ONE FOR EVERY STEWARD

Many individuals and locals get a monthly bundle ranging from five to 225 copies (that would be the Milwaukee Teachers). Members or stewards pick up copies at the union office or someone may distribute them.

Communications Workers Local 1037, representing nearly 11,000 public sector and other workers in New Jersey, goes one better by buying a subscription for each of its 348 stewards, sent to their homes. (They don’t pay $30 apiece; we give them a discount.)

When new stewards come to their first training, “when we have that initial power discussion with them, it blows their mind,” says President Ken McNamara. “They see we’re not like any union they might have been in before. We are building a member-driven, grassroots movement…

Ways to Use Labor Notes

“And every month getting Labor Notes reinforces what we tried to instill in them in a couple of days.”

McNamara adds that the common reading material “makes for a lively discussion in good-and-welfare at the membership meetings. They will routinely bring up things they read in Labor Notes. We had a lively discussion about Volkswagen at the last one.”

Can’t afford that many subscriptions? Chai Montgomery, a bus driver in southeast Michigan, blows up Labor Notes articles to poster size and posts them on the union bulletin board at work.

MAKE THEM READ IT

Luisa Gratz is president of Longshore and Warehouse Union Local 26 and an officer of the California district council. She started reading Labor Notes 35 years ago, when it was founded. Through that time she has always duplicated articles to educate stewards and the council.

When she sends out the monthly meeting notice she includes an article from Labor Notes. “They do read the material,” she says, “and I engage them in discussions to make sure they did.”

She cites articles that exposed “the foolishness of charter schools,” taught “body-mapping” for health and safety purposes, exposed conditions at Amazon (“important to our warehouse workers”), and taught how to fight discipline grievances.

“I like to educate the district council so they don’t think the whole world revolves around them,” she says. “I would be lost without Labor Notes.”

Reading articles is great, but meeting and plotting are even better. Activists in a couple dozen local areas from San Diego to Vermont have worked with Labor Notes to organize half-day or full-day Troublemakers Schools.

These schools bring together folks from different unions and worker centers in a way that just doesn’t happen at the central labor council. The best of local struggles are highlighted, skills are taught, connections are forged.

In Portland, Oregon, the results were concrete. The school put together by the Northwest Labor Notes Organizing Committee last spring brought high school students, a member of the Chicago Teachers Union, and author Joe Burns of Reviving the Strike.

“It was an opportunity for the teachers union here to have a personal connection with the Chicago model,” said Megan Hise of Labor Radio. Ten months later, Portland teachers got fully prepared to strike—and won new jobs.

And then “we had five unions this spring that set [strike] deadlines,” Hise said. She thinks the school was “an important space that normalized the idea of a strike so it was not a terrifying thing: we should be proud to take our members there.”

Scotty Fairchild, a parks technician in Portland, added, “We’re often on our own little islands. When we get together we learn that certain groups are having a success, and we can learn from them how they gained that.”

Labor Notes is expanding its direct training and consulting. Fifty trainers and advisors are now a part of the Labor Notes Associates program, offering their expertise on topics ranging from steward basics to contract campaigns to new officers taking over a local.

Pat Kane, treasurer of the New York State Nurses Association, was part of a slate that came into office in 2011, determined to build a “new NYSNA.” Labor Notes’ Mark Brenner aided them, both in the running for office phase and through the transition.

“He knew why we did this and what our goals were, on a visceral level,” Kane said. “He helped us establish priorities, do strategic planning. When we were preoccupied with so many things, he kept us on track.”

Now Labor Notes trainers are working with the Amalgamated Transit Union on a stewards program to help locals across the country.

To find out how Labor Notes can help your union, email training[at]labornotes[dot]org or call 718-284-4144.

Ken McNamara talked about blowing his stewards’ minds, but perhaps the most mind-blowing experience of all is the biennial Labor Notes Conference.

McNamara’s brought 25 people to the 2014 conference, and they’re not all members—two belong to a community organization, two are student activists. He wants the union’s allies to know what his members know about the potential power of labor.

Eighty members applied for the local’s scholarships. McNamara counted off the benefits: “The sector meetings that happen, like young workers in our Next Gen program; those you meet informally; it’s very practically helpful—people learn new skills.

“But also it’s a huge shot in the arm. We need to share that Labor Notes feeling with more people, to walk away and feel rejuvenated.”