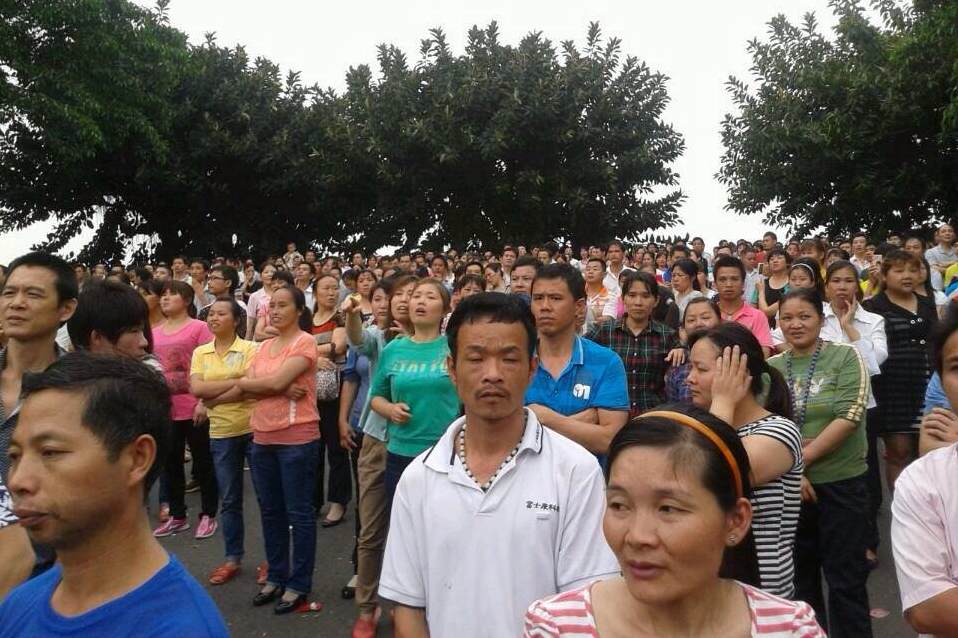 The strike at the Yue Yuen shoe factory in Dongguan, China, keeps growing: now 48,000 workers have joined. Activists are asking international supporters to leaflet stores, and to send workers encouragement via the Facebook and Twitter hashtag #ChinaSolidarity.

The strike at the Yue Yuen shoe factory in Dongguan, China, keeps growing. Now 48,000 workers have joined, and local groups are calling for international solidarity.

Yue Yuen, owned by Pou Chen Group, is the largest athletic shoe manufacturer in the world.

Some workers are preparing to retire and have been robbed of the social insurance funds they are legally entitled to. The total amount workers are owed in back pay from the underpayment has not been calculated—but at the very least it is in the millions.

Faced with the company’s stubbornness and piecemeal offers, more and more workers have joined the strike—and it ballooned to include a solidarity strike by workers employed by the same company in neighboring Jiangxi province.

Despite heavy surveillance and cops stationed all around, workers remain in the industrial park. Communication continues through new and dispersed QQ (social media chat) groups, and in areas where workers naturally assemble: by the river, clocking in and out, and at rest areas inside the plant.

Many of the worker activists and some reps have been arrested. It is unclear who has and hasn’t been released. Zhang Zhiru and Lin Dong, both with the ChunFeng (“spring wind”) worker center, are among those whose whereabouts are unknown. They were instrumental in providing guidance and advice to workers about collective bargaining and formulating demands.

Meanwhile, thousands of drivers for a private bus company held a strike and protest in Shenzhen April 22, “demanding a more transparent wage calculation system, overtime payments in arrears, fewer working days, and the abolition of a penalty scheme that forced drivers to pay for any vehicle damage caused by accidents or face dismissal,” China Labor Bulletin reports.

A 50-year-old driver described the conditions: "Human beings just cannot stand these long shifts and heavy workload. Imagine getting up at six in the morning and coming home after ten at night, driving 320 kilometres [200 miles] across five districts, stopping at over 100 traffic lights and 60 stations, and still having to worry about earning a living wage. On top of that, your shift for tomorrow is one hour earlier!"

The next day, “company representatives were dragging workers out of their dormitory and forcing them back to work,” reports CLB.

There are no formal worker representatives currently. The All-China Federation of Trade Unions has set up a working group and is doing an investigation in the factory, but the results are not expected to be made public.

Meanwhile, local groups are doing their best to communicate with workers and identify leaders—all very challenging with the heightened surveillance.

So far workers have rejected all management’s proposals: a minimal wage increase, a housing allowance, and a new social insurance payment scheme.

Hong Kong groups closest to the action believe that, if the workers hold out, they can win by going after the source of power and money: the brands.

The groups are asking international supporters for two things:

The goal is direct negotiations between the workers and the companies and brands, with some Hong Kong worker center representatives sitting in as observers.

Teresa Cheng is a field organizer for the International Union League for Brand Responsibility. She just returned to the U.S. after spending a year and a half studying Mandarin at Sun Yat-sen University in Guangdong, and has been in close touch with the groups in Hong Kong, China, and Taiwan who are working on the Yue Yuen case.