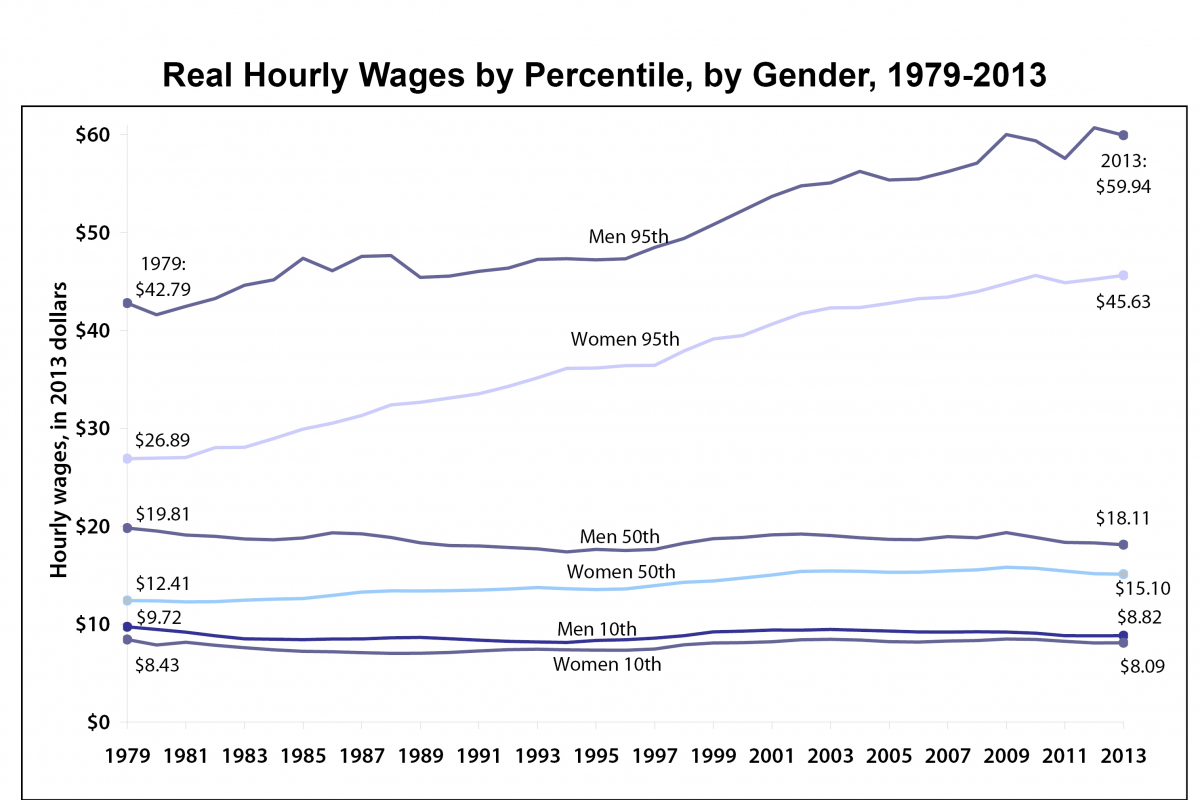 The persistent gender wage gap affects earners at all levels, high to low, from the boardroom on down. What’s to be done?

Though still large, the wage gap is smaller than it used to be. It began to narrow in the late 1970s, partly for good reasons. Thanks to the women’s movement and women’s organizing and agitation for equality, women were getting more education and more work experience, and moving into higher-paid occupations.

But for the entire bottom 60 percent of wage earners, there was a troubling dynamic—a big part of the closing of the gap occurred because men’s wages were falling.

Since the 1970s wage inequality has risen dramatically for both men and women. Most wage gains have gone to the already affluent—not to middle- or low-wage workers.

This is clearly not the kind of improvement in the wage gap that actually helps women. In fact, lately wages for many women have been falling, too (see box).

At this point, what’s depressing most women’s wages is less the gap from men—and more the gap from the top 10%.

The dramatic rise in inequality that has kept wages down for most workers, women and men, for a generation does not have to continue. It has been driven by government policies that favor the already affluent, and these can be changed.

WHAT CAN WE DO?

Here are eight priorities for working women in 2014:

1. Restore and Bolster Public Services. In the short run, the urgent issue affecting women’s wages and job quality is high unemployment. It’s obviously a disaster for job seekers, but it also holds down wage growth for people with jobs, since employers don’t have to pay much to keep the workers they need when those workers lack options.

Businesses aren’t hiring because they have not seen demand for their goods and services pick up, so the most direct way to create jobs is to boost demand. A good start would be to reverse the savage austerity this country has undertaken, by reestablishing the public services and public sector jobs that were cut in the Great Recession.

Since sexual harassment is about power, not sex, it’s not surprising that especially low-wage women in lousy jobs get a lot of it. Stopping Sexual Harassment, Labor Notes’ 1992 guide, is still one of the most complete manuals out there. It has sections on member-to-member harassment, women of color, defending yourself, the legal route, and “an unhelpful union.” Order at labornotes.org/store.
♦ ♦ ♦

For a training on member-to-member harassment developed by the United Electrical Workers, including both racial and sexual harassment, click here.
♦ ♦ ♦

KC Wagner of the Worker Institute at Cornell University frequently does “train-the-trainer” workshops for unions, showing how to lead an interactive class on addressing and preventing sexual harassment, within the context of building union solidarity and promoting workplace respect. Contact her at kcw8[at]cornell[dot]edu.

The half-hour film “Union Women, Union Power: From the Shopfloor to the Streets” (available on YouTube), directed and produced by the Young Women’s Committee of the Philadelphia Coalition of Labor Union Women (CLUW), highlights five union women and their fights for workplace democracy. The committee aims to use the film to introduce younger women to the labor movement, with women leaders as role models. Funding was provided by the Berger-Marks Foundation.

The days are long past when the job of the union women’s committee was to provide refreshments. A report from the Berger-Marks Foundation looks at what women’s committees are doing today and what impact they have. Download Women’s Committees in Worker Organizations: Still Making a Difference at bergermarks.org.

You might not want to actually hand your mother a pretend check on Mother’s Day, but the info on this site is interesting. The salary.com/mom-paycheck website breaks out the work hours of average moms at various tasks and calculates what they would get paid if they were being paid. Stay-at-home moms work an average of 94 hours a week and would collect a “mom salary” of $113,586 a year. Mothers with jobs do an average of 58 hours per week in household and childcare duties on top of their paid jobs.

But of course, for three decades leading up to the Great Recession, rising inequality was already blocking wage growth for low- and middle-wage workers. To reverse that trend, we should:

2. Increase the Minimum Wage. Its real value has eroded dramatically and is now more than 25 percent below its peak in the late 1960s. The Fair Minimum Wage Act would raise the minimum to $10.10 by 2016. Around 55 percent of those who would see a raise are women.

Further, the bill would raise the minimum for workers who earn tips—which has been frozen at $2.13 per hour for more than 20 years—to 70 percent of the minimum wage. Around 75 percent of tipped workers are women.

3. Unionize, and Defend the Unions We Have. The decline in unionization is one reason for the growing wage gap between low-wage and high-wage women. We need to update labor law to keep pace with increased employer aggressiveness in fighting unions, and shore up enforcement of existing law.

4. Enact Mandatory Paid Leave. A place to start would be paid sick leave for the almost 40 percent of private sector workers who lack the right to even a single paid sick day. (See here to read how a local coalition boosted paid sick day rights and the minimum wage in the D.C. area.)

5. Update Overtime Laws. The Fair Labor Standards Act is still using an old cut-off point beyond which employers don’t have to pay time-and-a-half for overtime. It allows workers making $455 per week or more—or $11.38 an hour for a 40-hour week—to be counted as salaried so they are exempt.

6. Win Immigration Reform with a Path to Citizenship. A large pool of easily exploitable workers with little bargaining power hurts not just their wages but also the wages of immigrant or native-born workers who do similar work.

7. Stop the Trans-Pacific Partnership. Our current trade agreements (and the new ones in the wings) reliably protect corporations while promoting a race to the bottom on labor standards. We need to make the rules governing globalization fairer to workers.

8. Tax the Rich. The income hikes for the top 1 percent—primarily corporate executives and financial professionals—have been far over and above what was needed to induce those people to do their work. This concentration of earnings at the top has been a key impediment to wage increases for the rest of us.

One obvious remedy is to significantly hike the marginal tax rates on high incomes, as California did in 2012.

Heidi Shierholz is an economist at the Economic Policy Institute in Washington, D.C. Join a women workers' meeting and plenty of workshops on tackling the above eight priorities at the Labor Notes Conference in Chicago April 4-6.

A version of this article appeared in Labor Notes #420, March 2014. Don't miss an issue, subscribe today.
Related
What Can Unions Do Now to Defend Abortion Rights? »
Yes, Abortion Rights Are a Union Issue »
Workers Have Leverage. It's Time to Use It. »
Film Review: 9to5, The Story of a Movement »
COVID Tipped the Scale: How King County Employees Made Childcare a Union Benefit »