Seattle Marches to a $15 Beat 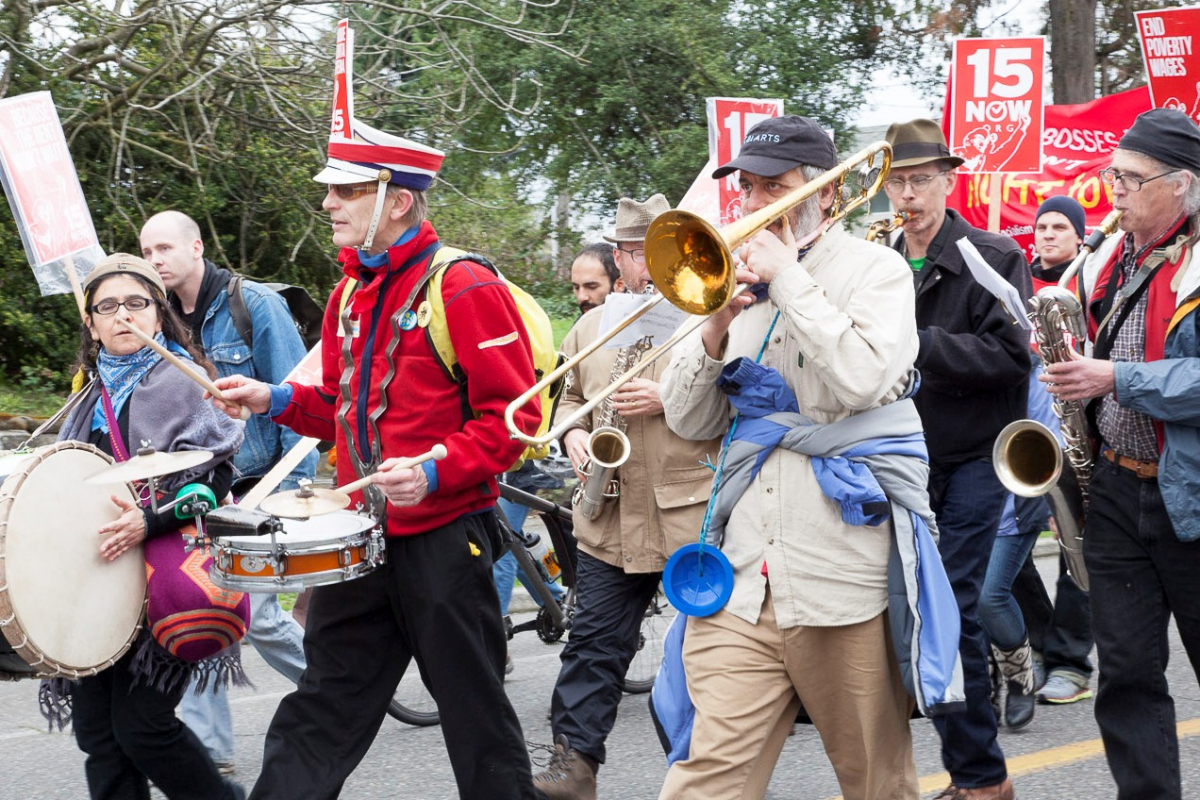 Seattle activists struck up the band at a March for $15 on March 15. One threat is efforts to dilute the proposal. So labor and community groups are preparing to get the job done by ballot initiative if the city council compromises too far. Photo: David McDonald/ATU 587.

While the federal government mulls a wholly inadequate minimum wage of $10.10, Seattle is poised for $15.

New Mayor Ed Murray says, “We know it is not a matter of if we get to $15 per hour, but when and how we get there.” All nine city council members publicly endorse the concept.

But underneath the apparent consensus are differences on what $15 means and how long it should take. So labor and community groups in Seattle are mobilizing to hold the council’s feet to the fire—and to get the job done by ballot initiative if the council compromises too far.

Voters in SeaTac, home to the Seattle area’s airport, narrowly approved a $15 minimum for workers doing airport-related work last year. Litigation has put the raise on hold for those actually working at the airport, but it went into effect January 1 for hotel and restaurant workers. That victory spurred interest in doing the same thing on a bigger scale in the city of Seattle.

Strikes by fast food workers had already built momentum. And the November election to the city council of socialist Kshama Sawant, who made the $15 demand a centerpiece of her campaign, made clear to other elected officials that Seattleites were ready. Sawant is also a delegate to Seattle’s central labor council from the Teachers union (AFT).

A recent public hearing on income inequality drew 700-800 people, with probably 80 percent supporting the increase—a majority wearing the bright red T-shirts of the two principal coalitions driving the campaign, 15 Now and $15 for Seattle.

Jason Harvey set the tone. A Navy veteran who’s worked eight years at Burger King, Harvey told of his forced reliance on food stamps and food banks. “If you pass this with 100 exceptions,” he said, “you end up hurting people like me.”

David Rolf, president of Service Employees (SEIU) Local 775 and co-chair of the Mayor’s Income Inequality Advisory Committee, said, “Seattle can play the kind of role on income inequality that Selma and Birmingham played for civil rights.”

Tried It, Liked It

Washington has the nation’s highest state minimum wage, $9.32. It came about through a 1998 labor-initiated referendum that required annual increases based on inflation. That was clearly a huge step forward, but Washington State Labor Council President Jeff Johnson notes, “We were short-sighted. We set our sights too low… We did not anticipate the staggering inequality of income and wealth that we now all face.”

Business direly predicts job loss if the minimum wage is raised. But since 1998 the state’s job growth has been 0.8 percent per year, 60 percent higher than the national average, with a 21 percent increase in restaurant and bar jobs.

Despite strong public support and an apparent consensus on the city council, nobody expects this to be an easy fight. One threat is efforts to dilute the proposal.

Some opponents are pushing for a “tip credit,” which would subtract tip income from a worker’s $15, or a “total compensation” proposal that would require employers to pay $15 in wages and benefits combined. But Washington is one of the few states with no “tip credit” exception, and it’s unlikely Seattle would agree to one.

Others want exceptions or modifications for small businesses or not-for-profits, with the increase phased in over years. At a March 15 rally, Sawant endorsed a two-year phase-in for small businesses and nonprofits: $11 in 2015, $13 in 2016, $15 in 2017. This may meet concerns of some small business owners, but also create friction with employees of nonprofits and their unions.

And 15 Now organizer Jess Spear notes, “Small businesses are being crushed by large corporations, not workers’ wages.” Activists are clear that working for a small company or a non-profit doesn’t cut a worker’s expenses. But absent state policies to support small business economically, Spear and others do see value in providing time for genuinely small businesses to adjust to the higher rate.

A few unions want an exception for unionized workplaces, reasoning that it would help them convince employers to recognize a new bargaining unit if they could promise to accept a wage lower than the minimum, perhaps with additional benefits to balance the lower wage.

Most unions reject a sweetheart arrangement, though, arguing that such a behind-the-back deal would not only impoverish workers but make the new union unpopular with its members.

The Mayor’s Committee is expected to make a recommendation to the city council by the end of April. A key tool activists are using to ward off excessive compromise is the threat of a voter referendum. Rolf said flatly that “if there’s not a significant policy change before the beginning of July, there will be a ballot initiative.”

15 Now is a grassroots mobilization affiliated with Sawant and her organization. It plans to start collecting signatures for an initiative quickly, concerned that organizing such a campaign takes time and that immediate action is necessary to maintain the potential for an initiative.

Rolf, whose local spearheaded a successful “Citizens for More Important Things” initiative against endless public funding for sport arenas in 2006, notes those signatures were collected in two-and-a-half weeks.

But Spear and 15 Now hope an initiative campaign can be the kick-off for a big movement that will address a host of other issues: rent control, a fair tax structure, universal health care, and childcare. She points out that others are focused only on the one issue of the minimum wage.

15 Now has called for an April 26 conference to build a national movement for a $15 minimum wage; organizers hope to attract 1,000 activists from Seattle alone.

In any case, there is consensus on the importance of the initiative. Dave Freiboth, head of the local central labor council, says, “The threat to take the decision out of the politicians’ hands and take it to the citizens” is key to keeping up the pressure.

“If getting a deal means undermining tipped workers or substituting total compensation for a minimum wage, then it would be making bad law. We’ll go to an initiative if we don’t get something that meets our needs.”

15 Now has put together neighborhood action groups. Eight are active already, with hopes for 30 by the end of April. The groups will table and leaflet in busy areas, hang banners on overpasses, and picket fast food restaurants. The business co-chair of the Mayor’s Committee owns the restaurant at the Space Needle—so 15 Now picketed there, to needle him about his position on the minimum wage.

A March for $15 on March 15 drew 600-700, a substantial portion of them union members, and was endorsed by unions and community organizations, as well as the Democratic Party organizations in Seattle’s two most Democratic districts.

The campaign has spurred some innovative organizing within specific constituencies. The Transit Riders Union has formed Transit Riders for 15 and is signing up bus passengers at an impressive clip.

K.L. Shannon, an NAACP board member, helped organize People of Color for 15, out of concern that voices from communities of color weren’t being heard. Shannon says, “We want to see $15 passed, but we need to know where the jobs are coming from and where they’re going. A $15 minimum wage doesn’t help if there are not jobs in our community.”

And an umbrella group called $15 for Seattle, which began as a “labor table” but now includes 15 Now and other allies as well, has helped to corral labor involvement.

For now, labor is united in mobilizing members and resources to win this fight. The Seattle labor council is resurrecting its defunct mobilization committee, the state labor council highlighted the March 15 rally, and AFL-CIO and Change to Win unions are working together with unaffiliated locals and the community. Few doubt that their work will result in victory, notwithstanding questions about the details.

“If you look at history, it doesn’t matter so much who’s in office,” said Spear. “It’s working people who make the difference.”