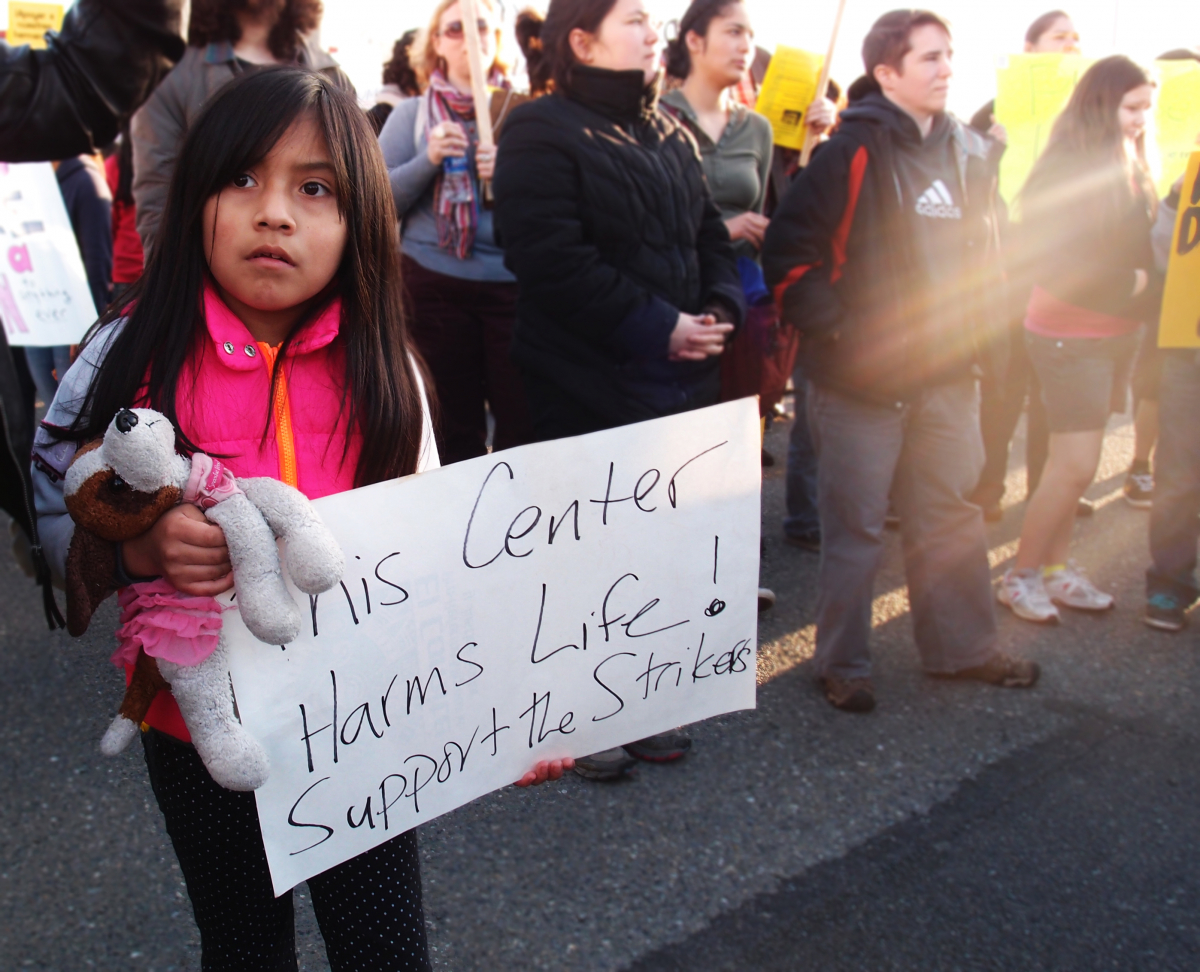 Hundreds of immigrants at a Tacoma, Washington, detention center garnered community support for their hunger strike, demanding that families be allowed to stay together. Photo: Heather Villanueva.

The collective voice of 1,200 immigrants echoed through the halls of the Northwest Detention Center yesterday and reverberated with the community at a solidarity rally in Tacoma, Washington. Their hunger strike began last Friday, over systematic exploitation and substandard living conditions at the hands of the for-profit Center’s overseers.

Until negotiations over their demands begin, the hunger strikers will continue their action. On its fifth day, activists in communication with the strikers put the number of active hunger strikers in the hundreds while ICE officials claim it’s down to five.

Maru Mora Villalpando of Latino Advocacy described the exploitation. The contract given to the GEO Group to manage the center 10 years ago stipulated the state would pay $80-$100 per day per person, she said. Since then, “their detainment capacity has gone up from 300-500 immigrants to locking up 1,600. Now they’re making $120 to $160 per person each day.

“The diet of an immigrant detained here consists of mashed potatoes and oatmeal. People are so hungry that they’ll work for a dollar a day in the ‘volunteer work program’ just to buy $5 of instant soup. Do the math: we’re talking about a lot of money they’re making off immigrants.”

Tucked away between the Port of Tacoma and I-5, the unassuming Detention Center is one of many federal facilities across the U.S. tasked with housing immigrants while they await deportation proceedings.

Detainees are on hunger strike to demand better food, wages for work they perform at the facility such as cooking and cleaning, bonds so that families can remain together while they contest their cases—and an end to deportations.

Their strike coincided with a Bring Them Home Action in San Diego, an effort led by students to bring 150 deported persons back to the U.S. to reunite them with their families in the U.S.

Immigration and Customs Enforcement (ICE) and the Obama Administration enforce the federal program they call “Secure Communities.” They insist it is designed to go after violent and dangerous criminal alien offenders. But as the number of immigrants deported under Obama approaches 2 million, actions led by undocumented immigrants have shown the flaws in this story.

Rocio Zamora, for example, says that in 2008, ICE came looking for her brother but left with her son in handcuffs. When she insisted that they didn’t have an arrest warrant for her son, an ICE officer pushed her to a table and said, “We all know you’re illegals so we can take whoever we want.”

Released on $5,000 bail, Alan Zamora then attempted to fix his immigration status. His wife petitioned on his behalf, but in the end he was denied. In his last hearing with ICE, Alan was told he had one month to leave the country.

Now 27, Alan was brought to the United States from Mexico City by his mother at the age of three. His mother Rocio, now with tears streaming down her cheeks, said he doesn’t deserve to be punished for her actions. He stayed out of trouble and worked hard at two jobs, she said.

The five-year-old deportation order was carried out last Thursday at 7:30 a.m., as Alan was leaving for work. By Monday morning, he had been sent to a detention center in New Mexico. In her most recent conversation with her son, Rocio said, she heard how badly immigrants are treated behind those walls.

“We immigrants come to work and seek a better life,” she said. “I love this country but it makes me angry to know that there are so many injustices.

“They say we steal jobs and all we do is take. We immigrants pay millions and millions of money in taxes and into Social Security; I’ve worked here for over 20 years and that’s money we’ll never get back. As I stand here, I know it’s an enormous business.”

The billions of dollars reaped by private prison corporations like the GEO Group were not lost on supporters at the rally from the faith, labor, and student communities.

Sergio Salinas, president of Service Employees Local 6, said his local is affected. “They’re our friends, neighbors, relatives, and co-workers… For unions to survive, we need to expand and help people achieve their dream of citizenship. An influx of new workers willing to join unions will strengthen our industries and we’ll make this country a better place.”

Antonio Flores of the advocacy group El Comité said, “We can get demoralized with the constant deportations, but the hunger strikers have given us hope to keep pushing on.”

Rocio Zamora summed it up: “We have to be united, and we can’t wait until something happens to us directly. I will do whatever it takes to get my son back in our home.”

As the rally ended and many of the people who had been there for hours went home, a new wave of young people began to congregate in the dark streets for a Noise Demo. This time a collective voice made up of drums, speakers, pots and pans echoed from the streets and into the halls of the detention facility.

Rolando Avila is a former union organizer in Seattle. He is an undocumented activist who uses art as a resistance tool.

Undocumented immigrants who have organized civil disobedience to stop deportations will speak at the Labor Notes Conference April 4-6 in Chicago.

Correction: Rocio Zamora lives in Costa Mesa, California, not Bellevue, Washington. Her son lives in Bellevue.
Related
Viewpoint: A ‘Union’ That Pushes to Deport People Is the Labor Movement's Opponent »
Work Is the Reason Latinos Are Getting Slammed So Hard by the Pandemic »
Poultry Workers and Allies Organize in the Wake of Anti-Immigrant Raids »
Steward's Corner: How to Respond If a Member’s Work Authorization Is Challenged »
Unionized Judges and Public Defenders Demand Due Process for Immigrants »