Use the Labor Notes Conference To Build Community Locally 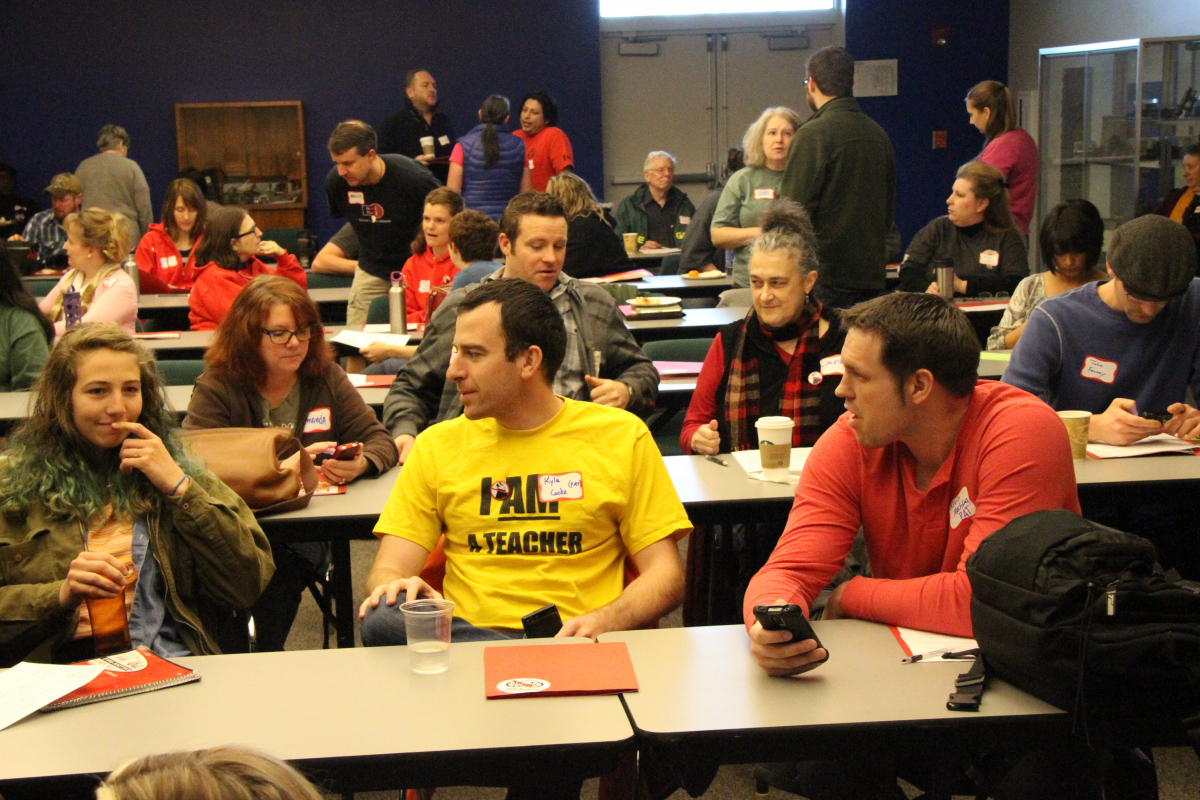 Solidarity is our cornerstone. Unions are weaker when workers from different unions don’t mingle together. When there is no labor community, solidarity shrinks—and unions suffer.

But this can change.

In Portland, Oregon, a group of volunteers from different unions have been organizing together, with the assistance of Labor Notes, to strengthen the local labor movement here.

We’ve had some big successes and are building on them. Last April Portland volunteers coordinated with Labor Notes to put on a regional Troublemakers School, attracting more than 250 unionists from 55 different unions and community groups across Oregon and Washington.

Not only did the school raise the bar for local labor education, but new links between unions were made. Sarah Chambers from the Chicago Teachers Union met with Portland teachers to help transplant the key lessons of the Chicago strike.

Portland teachers have since adopted CTU’s community organizing model—and are now preparing to strike themselves.

The Troublemakers School sprouted from the seed of a trip to the national Labor Notes conference in Chicago the year before. One union, Laborers Local 483 (public employees), set an example for others by sponsoring three members to attend, with the goal of developing new leaders.

These Laborers were part of a 15-strong Portland contingent of activists who returned eager to bring their experience back home.

“I was energized by all of the amazing people in the social justice movement there,” recalled letter carrier Thomas Richardson. “The Labor Notes Conference is ground zero for the fightback.”

What Local Unions Can Do

One big outcome of the conference was creation of the national network Community and Postal Workers United. The Portland CPWU chapter has been busy ever since, organizing actions against the shutdown of postal offices and processing centers.

The Portland contingent gave a public report-back about their conference experience. That event prompted a commitment to continue organizing—eventually resulting in the Troublemakers School.

To ensure the school would be a success, volunteers wrote model resolutions that various unions passed, agreeing to endorse the school, donate funds, and encourage their members to attend. In the end nine unions—including some of Oregon’s largest—endorsed.

A committee of 10 organizers met twice a month. The biggest tasks were outreach and fundraising. One of the endorsing unions, Electrical Workers (IBEW) 48, agreed to donate space at their training center. The biggest expenses were airfare for the out-of-town speakers and meals for the attendees, but union donations and a registration fee of $10 covered and exceeded all costs.

We chose workshop topics to focus on local and national labor issues, such as fighting austerity cuts in Oregon and how unions can prepare for strikes, and invited both local and out-of-town speakers.

Labor Notes assisted with logistical support—creating the website, managing registration, and acting as the fiscal sponsor for receiving funds—as well as brainstorming and coordinating workshops and sending speakers to help lead workshops and ensure the conference ran smoothly.

Building on the school’s momentum, volunteers are now organizing to send 50 Portland activists to the national Labor Notes Conference in Chicago April 4-6. Again the goals are to develop new leaders and forge bonds among Oregon unions.

Volunteers are using similar tactics to those that helped build the local school. We approached three locals with a request to send members to Chicago, and to sign on to a letter asking other unions to do the same. The letter highlighted the goal of developing younger leaders. To ensure that it gets a reception, we’ll ask members inside the unions to push internally.

Volunteers are also planning fundraising events to help non-sponsored members attend, including a meet-and-greet with author Steve Early and a beer social.

We’re certain our investment in organizing a large delegation to the Labor Notes Conference will pay off handsomely. Any activist—from a new steward to a seasoned organizer—will have the opportunity to be inspired.

These unionists will bring their transformational experience home, infect their co-workers with energy, and—we hope—join our volunteer base, strengthening Oregon’s labor community in the process.

Shamus Cooke is a social worker, shop steward, and elected officer of Service Employees Local 503. For help getting started with Portland-style organizing in your own city, call Labor Notes’ New York office, 718-284-4144.

A version of this article appeared in Labor Notes #418, January 2014. Don't miss an issue, subscribe today.
Related
Can't Wait Until the Next Labor Notes Conference? »
From Call Centers to Coal Mines: Swapping Stories at the Alabama Troublemakers School »
Must-see play for union leaders at Labor Notes! »
Troublemakers Schooled in Detroit and Philly »
Labor Notes News: So Many Workshops! »