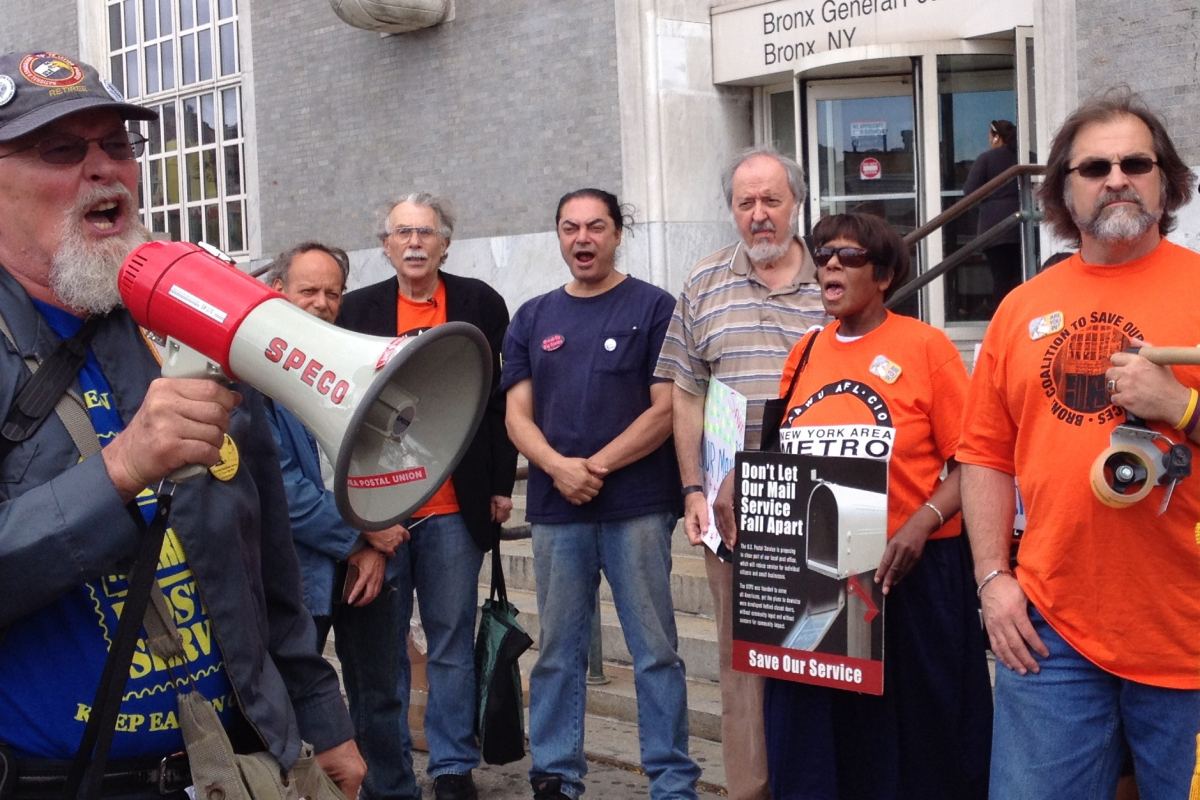 Members of three postal unions and community supporters gathered outside a Bronx post office slated for closure. The laid-off workers may be replaced by Staples workers. Photo: Alexandra Bradbury.

Staples’ latest ad slogan is “What the L?” That sounds like what postal workers said when they found out the retail chain planned to steal their work.

The Long Island, New York, local of the American Postal Workers Union didn’t waste any time after the news broke in November. Members voted to boycott Staples and ask their friends and neighbors to do the same.

Across the country, local delegations visited Staples stores in January to threaten a boycott unless the retailer’s new “postal units” are staffed by actual postal employees.

The pilot program opened postal counters inside 82 Staples stores in California, Georgia, Massachusetts, and Pennsylvania, staffed non-union by the big-box retailer. They offer many of the “most popular” (that is, most profitable) services APWU members provide at post office windows, including stamp sales, first-class domestic and international mail, and priority and express mail. Other services aren’t offered—money orders, media mail, and P.O. boxes, for instance.

The union doesn’t oppose making postal services available in more places and for longer hours. In fact, APWU and the other postal unions are in an ongoing battle to stop USPS from closing down post offices and cutting back hours at the ones that remain.

At one time, “we had, in almost any city of any size, air mail units that were open 24 hours a day,” said new APWU President Mark Dimondstein. “Those have been pretty much shut down.” In Greensboro, North Carolina, where he previously worked, a post office located in a mall used to be open seven days a week until 9 p.m.—staffed by postal union members.

The Inspector General’s report heaps praise on postal privatization in Europe. But a new report from unionists there tells a different story.

According to UNI Europa Post and Logistics, 15 years of privatization have produced “overwhelmingly negative” results for both workers and the public in the European Union, where any private company can now compete with the public postal service.

“The post office network has been drastically reduced and replaced with private partners such as grocery stores or gas stations, offering a reduced range of services,” wrote report author Christoph Hermann.

Public postal services in several countries are now “struggling to break even because of decreasing letter volumes and market losses to new competitors.” In Germany and the Netherlands, they’ve given up altogether.

“With few exceptions, the new competitors emerging from the liberalized market never opened post offices or installed letter boxes,” Hermann found. “Instead they pick-up mail directly at the premises of their mostly large corporate customers.

“As for mail delivery, they typically deliver only two or three days a week and only in highly populated areas.”

Postal prices have gone down for big corporate customers such as banks, phone companies, and online retailers—but up for regular consumers.

And workers have endured massive job loss (up to 50 percent in some countries), part-time-ization, wage cuts, and the breaking up of their collective bargaining power.

That’s the key. Workers say the new jobs have to be union and live up to the standards in their contract, not undermine them.

RACE TO THE BOTTOM

The Postal Service is known for providing stable union jobs, a good salary and benefits, a hiring preference for veterans, and strong protections against discrimination. It was a job you could make a career.

Though standards have eroded in recent years, they’re still much better than what you’ll find at Staples.

A recent online petition by a Staples employee calling herself “Sue Whistleblower” garnered more than 200,000 signatures protesting a new company policy to cut part-time workers to fewer than 25 hours per week so they won’t qualify for health insurance.

Is that the future of postal work? USPS management’s “constant refrain,” said Dimondstein, “is that the post office has to be competitive—which means, from their point of view, it has to engage in the race to the bottom for minimum-wage work.

“My answer is, why don’t we just put the children back into the textile mills and skip the in-between steps? That’s where this race to the bottom is going to end up.”

There’s also the matter of whether you want to trust Staples with your mail.

“Staples doesn’t care about the mail; they care about selling computers and pens,” said LeRoy Moyer, president of the Charlotte, North Carolina, local. “The person at Staples could be selling you a pen one minute, then trying to tell you how to send your package to a location overseas the next.

“It may be convenient, but if you give it to them and it doesn’t go where it’s supposed to go, it wasn’t too con-venient, was it?”

“We take pride in our work,” said steward Venus Abaoag, a member of Moyer’s local. “A Staples employee would not be held to the same standards that we are.”

She joined the delegation that visited three Charlotte-area Staples stores January 14. A store manager said they’d been warned to expect the union—one sign the message is getting through to corporate.

APWU aimed to complete a few hundred such visits by mid-January. If the retailer doesn’t back off, the next step will be a national day of protests at Staples stores, likely followed by “sustained activity” such as leafleting at the pilot sites and asking other unions to join a boycott, said Dimondstein.

He and the Members First Team swept into leadership of the APWU in November, promising a grassroots fight against concessions, closures, and service cuts. This looks like their first skirmish.

An ominous report from the USPS Office of Inspector General last summer recommended cutting costs through “public-private partnerships.” One area it called ripe for expansion: retail.

USPS was already on the case, having asked 80 retail chains in 2012 whether they’d be interested in offering postal services. Apparently Staples was first to bite.

But it’s easy to see how the scope of outsourcing could swell if Staples expands its program from the 82 pilots to its 1,600 locations nationwide—and if its competitors start getting into the game too.

Make no mistake: the point is to substitute Staples counters for brick-and-mortar post offices, not supplement them. That’s how the plan reduces costs: by closing post offices and subcontracting unionized postal jobs to low-wage retail employers.

The Inspector General’s report was blunt about this. “The Postal Service has attempted several times to rationalize its retail infrastructure with mixed results,” it said. “Stakeholder opposition and regulatory hurdles have prevented aggressive consolidation.”

Got that? For “stakeholder opposition” read “community protest.”

Franchising would kill two birds, the report said, bringing down both labor costs and the “fixed costs of owning retail facilities.”

What are these “regulatory hurdles”? For one, the closure of a post office can be appealed to the Postal Regulatory Commission. But a bill being pushed by Representative Darrell Issa—postal workers’ biggest foe in Congress—would nix the appeal if the post office were located within two miles of a contract postal unit.

An astute map put together by Save the Post Office blogger Steve Hutkins shows that 1,200 of the nation’s 31,000 post offices are within two miles of a Staples—exposing them to heightened risk of closure without appeal.

Staples can, of course, close stores whenever it suits the business plan. The company axed about 40 last year. It’s repositioning itself to focus less on retailing office supplies and more on competing with Amazon in e-commerce.

In contrast to the new Staples counters, the post office in a small town often serves as a “central meeting point,” Furgiuele said. “Part of people’s daily routine is to go to the luncheonette, stop by the local post office, and get the news.”

When he was a clerk working the post office box section in Farmingdale, New York, “I knew kids from the time they were born, to the time they got married and they had kids,” he said. “I would have a standing height measure on the side of the door and would measure them for years.

SOLD TO THE PRIVATE SECTOR

Chuck Zlatkin, the local’s legislative and political director, said 90 percent of customers at the Bronx GPO are African American or Latino. “You can’t escape the impact of racism on this situation,” he said. “You have to understand what the postal service has meant historically for people of color, in terms of the opportunity to get decent jobs, to get into the middle class, to be able to buy homes and send their kids to college—and also the people who are served by it.

“At these hearings, the people who show up are the people most dependent on the post office: elderly people, disabled people, poor people.”

A similar fight is raging over a historic Berkeley post office—less than a mile from one of the Staples pilots. Activists who maintained a tent city on the post office steps for 33 days last summer are pushing for a city zoning change that would prevent its being sold for private profit.

Even the serious concessions APWU made in its 2010 contract haven’t slowed management’s rush to close post offices.

“We gave them cheaper employees, a lower wage scale,” said LeRoy Moyer. “We’ve done everything we can do to let them make the postal service less expensive—and they’re still looking for that extra nickel.”

Developers and business association people want to put a high-rise hotel or mall there. “Berkeley has more than its share of boutiques,” said retired letter carrier Dave Welsh. “We don’t need any more! We need a public space.”

A well-connected real estate firm called the CBRE Group has the exclusive contract to sell off post offices like these; more than 600 are already earmarked. CBRE’s board chair, Richard Blum, is married to Senator Dianne Feinstein. Its CEO, Robert Sulentic, sits on the board of Staples.

The Staples battle looks like a re-run of one the union fought—and won—25 years ago. In 1988 Sears announced a similar pilot program at 11 stores.

Union members sent the corporation thousands of protest letters. Some cut up their Sears credit cards and sent in the plastic shreds. The company backed off, abandoning the program.

“Sears perceived, ‘we’re losing all this business for something peripheral to our main mission,’ and threw in the towel,” said David Yao, vice president of the Greater Seattle Area local.

“Think about it, if Sears had become the post office,” Dimondstein said. “Sears was the thriving retailer that had the reach into more cities and towns in the country—but Sears is basically gone now. The post office would have gone with it.”

He’s confident the public will take the postal workers’ side against Staples, too. “This is a time when the demand for a living wage has captured the imagination of the people,” he said. “I don’t think people are going to want their postal services performed by people forced to make $8.25 an hour.”

A version of this article appeared in Labor Notes #419, February 2014. Don't miss an issue, subscribe today.

Alexandra Bradbury is the editor of Labor Notes.al@labornotes.org
Related
Detroit Postal Workers Push to Dump DeJoy and His Ten-Year Plan »
The Postmaster General’s New Attack on the Mail Is a Fig Leaf for Privatization »
Can Postal Vehicles Help Us Fight Climate Change? »
VIDEO: Signed, Sealed and Delivered: Film and Discussion of Rank-and-File Militancy at the Post Office »
It's Been a Long Nightmare Before Christmas for UPS and Postal Workers »