Seattle Labor Rallies Behind ‘No’ Vote at Boeing 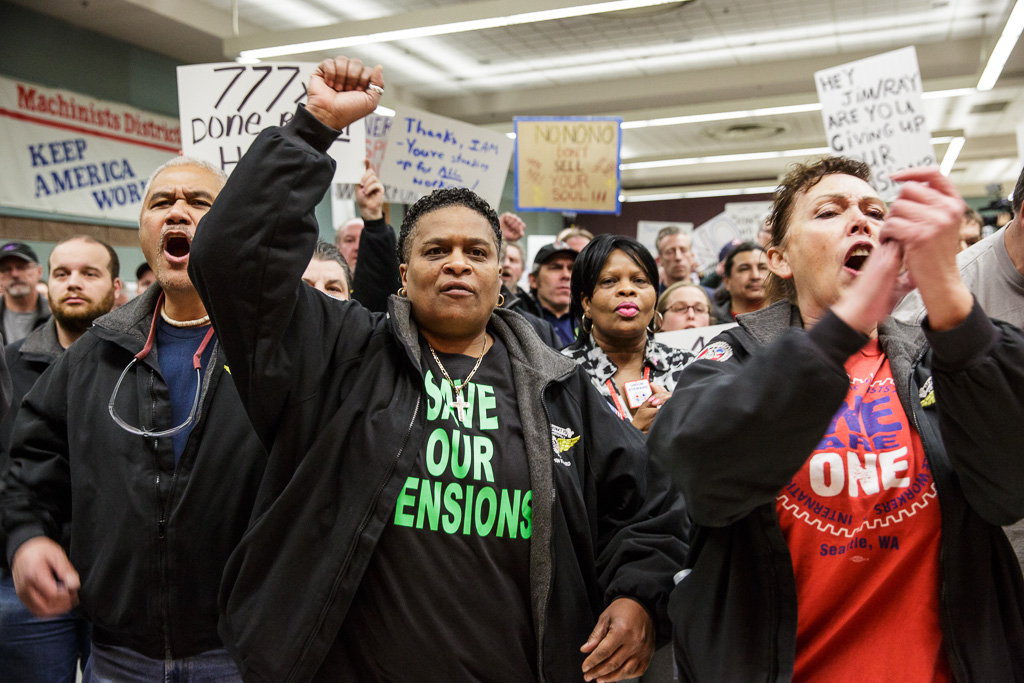 In the Northwest, labor takes seriously "an injury to one is an injury to all.” Supporters from a dozen other unions joined Boeing Machinists for a "Vote No" rally last night. Photo: Jim Levitt.

Boeing Machinists gathered with supporters from other unions at the IAM 751 hall in South Seattle last night for a rousing "Vote NO!" rally on the eve of today’s contract vote. The vote was forced on the local by the IAM International. In November members had voted 2-1 to reject Boeing’s proposal to freeze pensions and end them for new-hires, as well as reducing new-hire wages.

Boeing has now presented a proposal substantially the same as the one rejected, but without the new-hire pay cuts. Wilson Ferguson, president of Local A, the largest of four locals that make up District Lodge 751, wryly compared it to a thief who breaks into your house and steals most of what you own, including a big-screen TV; and then returns the next day, offering to bring back the TV and claiming that he's made you a generous gift.

In the Northwest, labor takes seriously "an injury to one is an injury to all.” Despite the fact that it meant implicit or explicit criticism of the IAM International, at the rally rank-and-file members from a broad range of unions were joined by top local leaders of the building trades, Communications Workers, Firefighters, Food and Commercial Workers, Teamsters and SPEEA, the union that represents 25,000 aerospace engineers and technicians, mostly at Boeing. Lynne Dodson, secretary-treasurer of the Washington State Labor Council, thanked the Machinists for all they've done to build a vigorous labor movement.

A speaker from FUSE Washington, a statewide progressive political organization, held up hastily gathered petitions signed by 5,000 supporters, demanding that Boeing stop its attacks. Tellingly, when she noted that Boeing had refused to talk with FUSE, workers shouted out that the petitions should be sent to IAM International President Thomas Buffenbarger.

Ferguson said, "I expect this kind of crap from the company, but not from the leader of my beloved union." Ferguson read a letter in a current IAM publication, in which Buffenbarger was eloquent about the need to defend the gains that workers have won over the decades—including defined-benefit pension plans.

Ferguson said the International's letters reminded him of those he'd received from his girlfriend when he left the country to go into the service. She repeatedly professed her love while, well, let's say, failing to remain faithful. Ferguson's message to Buffenbarger was the same as to his lost love: "If you screw my buddies, we're through."

Workers also had nothing but scorn for a group of local political leaders, all elected with labor support, who held a press conference to urge Machinists to accept destruction of their pension to counteract employer threats to move work elsewhere. But, as noted even in the mainstream media, the politicians making the call all have defined-benefit pensions paid for by the taxpayers.

Boeing CEO Jim McNerney, though, makes the politicians look like two-bit con men: he'll retire with a pension of $250,000 per month. For the last quarter, Boeing's commercial division showed a $14 billion profit, with a stunning 11.6 percent profit margin. And that was without what Dodson characterized as the "largest give-away" to corporate greed in U.S. history, a $9 billion bribe voted by the Washington legislature to subsidize construction of a new 777X plane in the Puget Sound—the only place in the nation (and perhaps the world) with a workforce already skilled in the complex process required.

Boeing demanded of other states that entered its bidding war for the 777X that it essentially replicate the facilities that already exist in Washington.

Washington Machinists face unrelenting pressure from Boeing, the IAM International, local politicians, and the media. The International, for example has taken out ads on sports radio.

In 24 hours we'll know the outcome of the vote. For now, Washington workers—and really all workers—owe the Boeing Machinists a huge vote of our own: a vote of thanks for standing up for working people and our standard of living.

Related
How Lobstermen Formed a Union Co-op to Claw Back Fair Prices »
Open Bargaining Brings the Power of Members to the Table in Berkeley »
Employers Are Using the Crisis to Push Concessions They Don't Need »
Engines Out and Pickets Up to Stop Health Plan Downgrade by Cummins »
Steward's Corner: Drafting Good Contract Language »