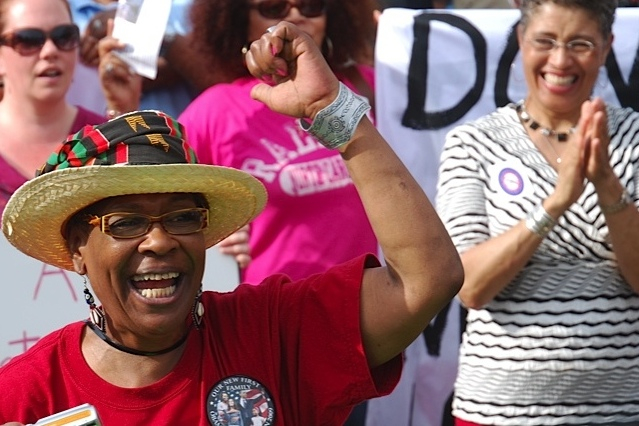 North Carolinians mobilized against an anti-worker (and anti-woman, anti-civil rights) legislative assault by bringing thousands of protesters to the state capitol every week for “Moral Mondays,” with close to a thousand arrests. Photo: Ajamu Dillahunt.

Lean meanness stalked workplaces. The political and economic outlook continued dismal. But the year was marked by workers trying new things and setting higher standards, for their employers, their unions, and—in the case of low-wage workers—their pay.

Unemployment ticked down slightly, but the jobs created paid worse than ever. Mainstream media reported with amazement that jobs that once paid the bills, from bank teller to university instructor, now require food stamps and Medicaid to supplement the wages of those who work every day.

California Walmart worker Anthony Goytia spoke for many when he said it’s no longer paycheck to paycheck for him and his co-workers, but payday loan to payday loan.

When long-awaited provisions of Obamacare kicked in, the promise of covering the uninsured was blighted by perverse incentives for employers to cut hours. Businesses that didn’t want to give insurance cried crocodile tears, so Obama delayed their fines by a year. But when unions objected that the new law unfairly undermined their multi-employer funds, the administration stonewalled.

As layers of corporate cash further insulated politicians from people’s needs, unions and worker groups had some success putting questions to voters directly. In New Jersey they overruled the governor’s veto and put a higher state minimum wage into their constitution, while Minnesotans raised income taxes on the well-to-do.

Transportation and hospitality workers at Seattle-Tacoma airport and the surrounding town voted in a $15 minimum, paid sick leave, and the ability to sue if hotels steal tips from banquet workers. In Seattle, socialist Kshama Sawant won a city council seat and shamed the two mayoral candidates into supporting a $15 city minimum.

With their voting rights under attack, North Carolinians mobilized against an anti-worker (and anti-woman, anti-civil rights) legislative assault by bringing thousands of protesters to the state capitol every week for “Moral Mondays,” with close to a thousand arrests.

Immigration rights activists mobilized locally all year, including brave human blockades against deportations, most recently in Los Angeles, D.C., and New Jersey. But none of this was enough to get a bill through the House—not even the Senate’s compromise, with its poison pill of more indentured guestworkers.

The mother of all secret deals, the Trans-Pacific Partnership, is still under negotiation. TPP would gut nations’ rights to pass legislation limiting corporate predators. But the sheer outrageousness of TPP’s reach, along with the secrecy around it, generated grassroots opposition, including from a few unions. Congress looked likely to vote on a “fast-track” for TPP in January.

Some attempted city-wide organizing: in Pittsburgh with a “community union”; in Boston with a multi-campus organizing drive by college adjuncts; and in the Twin Cities, where joint actions knitted together struggles against banks and employers.

Anti-eviction campaigns were bolstered by union support in Minneapolis, Portland, Detroit, and Boston—including by home-based childcare providers, fighting off both eviction and the job loss that would come with it.

Emboldened by the Chicago Teachers’ 2012 strike, teachers rose up against the corporate reform agenda. Seattle teachers refused to give yet another standardized test. Los Angeles teachers fought the promise of iPads for every student, a wedge to bring in more tests and corporate curricula.

Labor-community coalitions sometimes won the day. One Brooklyn hospital sits on land coveted by high-end condo developers—a constituency used to getting its way. But rather than give a résumé workshop, the New York State Nurses picketed with the surrounding community and refused to give up even after the bosses re-routed patients… So far they’ve saved the hospital.

Among the fuzzier new directions were the AFL-CIO’s enthusiastic but amorphous outreach to community groups and the UAW’s bid to get Volkswagen to allow organizing at a Tennessee plant—in order to install a German-style “works council” for union-management cooperation. Where’s that leading?

The same question came to mind as fast food workers walked out of restaurants—and briefly occupied some—in hundreds of cities in December, in a Service Employees-funded effort. A year of protests and strikes demanding “$15 and a union” have made low wages an issue politicians are finally scrambling to address, or at least explain away.

While the demand for $15 has made a small dent, the demand for a union seems as far off as ever. Between small shops, large turnover, and hostile labor law, signing a contract with McDonald’s or Pizza Hut sounds farfetched.

But fast food workers have been winning small victories: getting workers rehired after retaliatory firings, winning air conditioning in unbearably hot kitchens. In Chicago, Whole Foods workers securing a day off for Thanksgiving by holding “Strikesgiving” on the busiest grocery shopping day of the year.

The good old-fashioned strike also worked in Hialeah Gardens, Florida, where Walmart workers unassociated with recent organizing walked out to protest low hours and a tyrannical supervisor. With most of the shift out, management caved to their demands.

While retail workers struggled for more hours, others from nurses to postal and UPS workers protested as employers crammed more into those hours.

Auto workers, forced onto an Alternative Work Schedule that obliterates weekends and evades overtime pay, demanded their union fight the schedule. They got no satisfaction, but demanding a higher standard from union officials seemed to be in fashion.

When Machinists union higher-ups, following secret negotiations, pushed surprise mid-contract concessions on 31,000 Boeing workers, the membership tore up the ransom note and said no, two to one. Boeing had threatened to take its new 777X plane out of Washington state if workers didn’t cave. Now a slate is challenging the Machinists’ national leadership.

And a reform slate took over the 200,000-member American Postal Workers Union, promising transparency in negotiations, a strong 2015 contract fight, cooperation with the other three postal unions, and outreach to customers to save USPS from privatization.

Nobody would say the U.S. labor movement is doing well—we’re down to 11.3 percent and concessions are still rampant. But the alarming slide in living standards, while politicians assure us the economy has recovered, has stirred union members, and brought out voters, to demand better.

A version of this article appeared in Labor Notes #418, January 2014. Don't miss an issue, subscribe today.

Jenny Brown was a co-editor of Labor Notes.jenny@labornotes.org
Related
Viewpoints: How Academic Workers’ Leverage Can Grow in a Long-Haul Strike »
Every Union Contract Right Now Should Be the Best Ever »
Could We See a Rail Strike? »
Undaunted by Fines, Massachusetts Teachers Defy Strike Ban »
Ahead of Halloween, Sysco Teamsters Give Corporate Ghouls the Heebie-Jeebies »