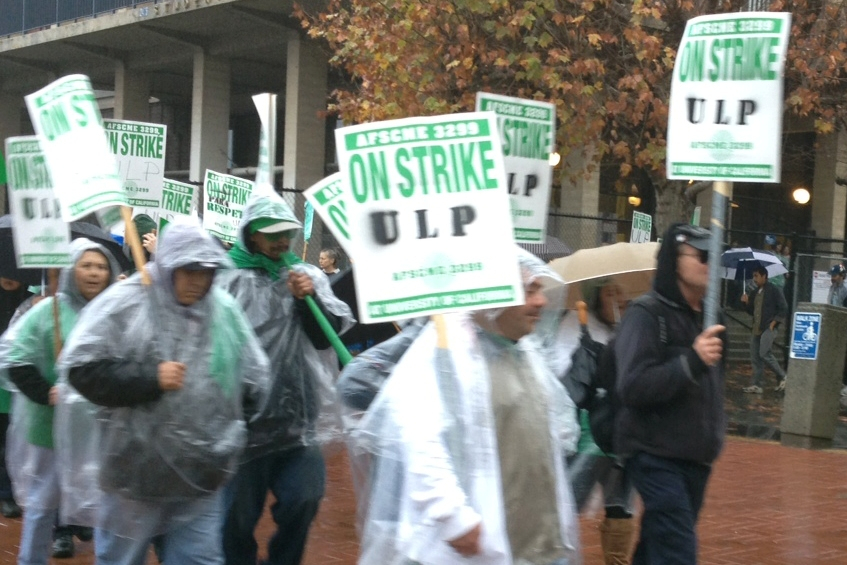 More than 22,000 University of California campus workers and service and technical workers in the system’s medical centers are striking today, claiming harassment and intimidation by management. They are joined by 13,000 sympathy-striking graduate students in a one-day strike.

UC tried a last-minute legal maneuver to stop the strike—claiming it would put patients at risk—but a Sacramento Superior Court judge upheld the right to strike. The union’s 50-worker task force will be on call to fill in during the strike in case of medical emergencies.

The medical center workers—including X-ray, laboratory, and surgical technicians, patient care assistants, housekeepers, and cafeteria workers, among others—previously struck for two days in May. This time, they joined forces with university campus workers such as custodians and groundskeepers, who are in the same union but have a separate contract.

Both groups have been in negotiations for almost a year. The union, AFSCME 3299, says it is the only side showing movement at either table.

Management implemented its last, best, and final offer—pay freezes and benefit cuts—on campus and medical center workers in September. Management has since returned to the table but remains unwilling to address staffing concerns.

The union alleges management began pulling workers aside and interrogating them for their union activity before the May strike, even threatening disciplinary action for workers participating. These unfair labor practice charges are the basis for today’s strike.

As AFSCME 3299 president Kathryn Lybarger put it: “The point of the ULP strike is, we’d like to see them change their behavior.”

The university campus workers joining the medical center workers in the ULP strike have also had similar concessions forced on them. Campus workers struck in 2005 and sympathy-struck in May, but this is the first time both groups have struck together. Unionized graduate students, members of UAW 2865, are sympathy-striking this time.

Campus and hospital workers have offered pension concessions during negotiations, including higher employee contributions, in exchange for wage increases—but UC rejected the offer.

“They can absolutely afford it,” she said. “The UC has taken $900 million in cuts [between 2009 and 2012] but they recouped it by increasing student fees and implementing service cuts.”

The service workers now coping with the imposed cuts, Manzanarez pointed out, are already the lowest-paid workers in the UC system. Many qualify for public assistance. Adding insult to injury, the UC system is increasing parking fees along with pension and healthcare costs.

Another deal-breaker for workers is the university’s refusal to agree to contract language to ban subcontracting and to convert temporary and per diem workers to fully benefited employees. Many are working steady part-time or even full-time hours.

Workers want the university to commit to a full-time workforce and create staffing committees to address concerns that are piling up about safety and workload.

“It’s getting to the point where we are working on skeleton crews and people are getting hurt,” said Manzanares.

In the spring UC faced criticism when they eliminated 300 jobs at UCSF and paid $1.2 million to settle a whistleblower suit that charged patient neglect at UC Irvine.

This time the striking medical center workers don’t have nurses and professional units striking in sympathy with them, as they did in May.

The California Nurses Association (CNA) was originally planning to walk out too, but reached a last-minute contract settlement with 4 percent wage increases over four years and protection of a single-tier pension with retiree benefits. The university had been pushing for a two-tier pension.

The Union of Professional and Technical Employees (UPTE), representing the medical center’s social workers, lab scientists, and pharmacists, is still in negotiations. UC threatened to implement similar terms on them, but was willing to go back to the bargaining table instead—so UPTE too opted not to strike. They, along with nurses, are turning out to support striking workers on the picket line on their breaks and after work.

On one hand, the nurses’ victory meant AFSCME lost a powerful picket line ally who could have put a lot of pressure on the hospital system during the strike. But on the other hand, CNA’s settlement set a strong contract standard for the other unions: the hospital agreed to preserve pension standards and raises for nurses.

“It’s definitely higher than what UC has maintained they can offer us,” Lybarger said.

At their most recent round of bargaining in early November, management showed movement for the first time on economics, but still wouldn’t budge on the staffing issues the union has continued to raise.

Unionized graduate students are striking in sympathy with the UC workers—a showing of support separate from their own negotiations, where they are not yet at the point of striking.

In their contract, graduate students are seeking to increase financial support for research and teaching assistants, have the university offer childcare to graduate students with families, and win stronger anti-discrimination language.

Though she works at the elite Berkeley campus, Maricruz said, the low wages hurt her ability to send her own children to college. “It’s ironic, working for a university for almost 19 years that my kids have not been able to attend,” she said.

“It should be a place I can send my kids. Instead, they work here. They have to go to community college.”