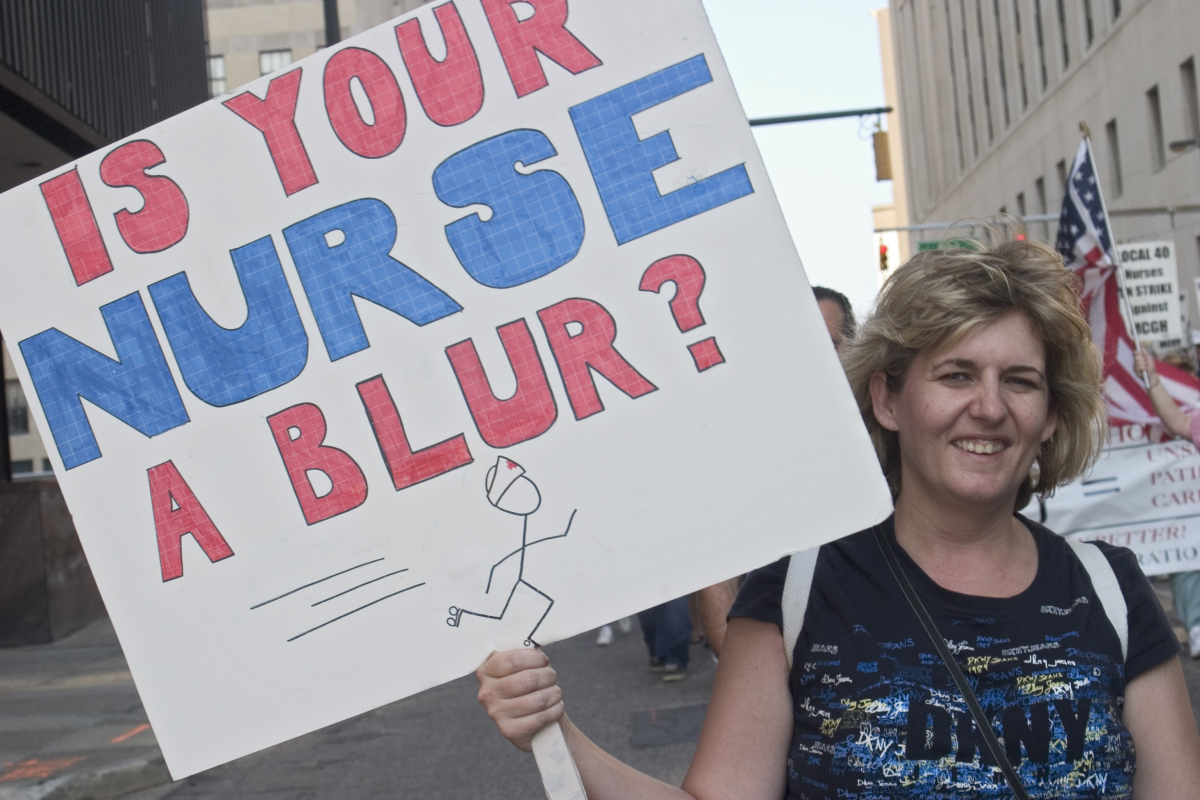 Nurses and other hospital staff are already moving at breakneck speed, and then come the consultants. Some hospitals have decided nurses shouldn't be talking to one another. Photo: Jim West/jimwestphoto.com.

A sign in the newborn intensive care unit invited nurses to suggest changes that would speed up their work.

One popular suggestion: replace a sticky combination lock with swipe-card entry. But that would cost too much.

Instead, on a consultant’s recommendation, supplies were rearranged. Blue masking tape outlines now show where each item is supposed to go. A sign lists the “five S’s” of workplace organization (sorting, straightening, cleaning (shine), standardizing, and service). Each shift, one nurse is supposed to check them off.

“I don’t know how much they paid for this outfit to come and do this, but it hasn’t really helped my ‘workflow,’” said Eileen Prendiville, a nurse at the California Pacific Medical Center.

Too bad they didn’t spend the money to rehire the full-time medical assistant who used to restock supplies, Prendiville said. After they laid her off, “you’d have a sick baby and no supplies there. That would help the workflow much more, to have a real person come in.”

Another Seattle hospital has actually branded its version of the Toyota method. Its spin-off institute offers $3,000-a-pop trainings in the “Virginia Mason Production System,” to help hospital administrators across the country “eliminate waste and increase value.”

Today’s hospitals are as committed to running lean as any factory. Highly paid consultants scrutinize hospital processes, measuring “metrics” such as staff-hours-per-patient-day.

Who could oppose improving quality or eliminating waste? “But they’re not talking about efficiency in how we provide care,” said DeAnn McEwen, a nursing practice specialist with the California Nurses Association. “It’s really about profits.”

In health care, 50 to 60 percent of operating expense is labor. So there is constant pressure to reduce staff.

“What it boils down to,” said John Borsos, secretary-treasurer of the National Union of Healthcare Workers, “is coming up with a way of dumping more work on people.”

They found “what we’ve been saying all along: we have no downtime,” she said.

In the ER triage area, even the 15 seconds while a chart prints out cannot be wasted. “You start taking vital signs, putting the armband on,” she said. “You’ll never see a triage nurse sit there. You never stop.”

But consultants get creative.

For instance, at each change of shift, the departing nurse traditionally gives “report,” explaining each patient’s situation to the incoming nurse who will take over. Nurses take this very seriously, McEwen said. After all, they have legal responsibility for the patient’s care.

“Often nurses would spend 15 minutes, to half an hour, to an hour of overtime, going over a detailed report,” she said. The practice makes patients safer—but to a time-motion consultant, it looks like “a bunch of nurses sitting around a desk.”

If staff aren’t the problem, why are health prices skyrocketing?

So some hospitals have switched to group “rounding” report, where the manager, secretary, and all the nurses troop around to each room together. This allows the manager more control—to limit discussion, move things along, and avoid overtime.

Other hospitals “decided nurses shouldn’t be talking to each other at all, and implemented taped report,” McEwen said, where “you leave a phone message for the incoming nurse.”

Technology underpins many management schemes for speeding up work.

“Patients say, ‘Oh my God, it’s that high?’” she said. “I say, 'Try not to worry—these digital machines are not always accurate.'"

When a nurse on the floor watched heart monitor screens, McEwen said, she could easily discover a false alarm. And if the patient really took a turn for the worse, that nurse was one more person to help respond. Now, hospitals are consolidating heart monitors in another ward, where a lower-paid tech watches them.

In some cases, even doctor consultations are happening over video screens, Borsos said, and medical transcription work is being moved off-shore.

“Technology can be useful, but it should not be designed in a way that replaces the judgment of skilled workers,” McEwen said.

She believes a patient interviewed over phone or video is more likely to tell the provider what she wants to hear—especially if the patient is ashamed he didn’t refill a prescription or couldn’t afford the recommended diet.

Over video, the nurse can’t see swollen ankles, lay a hand on clammy skin, or smell an infection, she said. “If I had them in front of me, I could tell.”

EYES ALL AROUND YOU

Many hospitals have stepped up surveillance—with cameras everywhere, swipe-entry doors, and electronic tracking chips in the badges workers wear.

At one hospital, nurses stopped those chips with a single provocative flyer, comparing their treatment to zoo animals and convicts. They left the flyer in a nursing office by “accident.” Management panicked and called off the plan.

Another method of surveillance: the celebrated electronic medical record.

The electronic paperwork to discharge a patient is “eight pages of clicks,” said Betsy Prescott, a leader in the Massachusetts Nurses Association. “You get spoken to if you miss one thing.”

“Some of these floors can have 15-19 discharges a day,” she said. “You’re not taking care of the patient, you’re documenting.”

All this documentation helps the hospital track every item it wants to charge the insurance company for—and pin the blame for any problems on nurses.

Standardization is a watchword of lean management.

Nurses at St. Charles Medical Center in central Oregon were justly proud of their Rapid Response Team—it had saved lives. But that didn’t stop the administration from announcing plans to end the team. The rationale? Other hospitals don’t have one.

Most hospitals now use computers to set staffing. You enter the number of patients on the unit today, and the software spits out how many nurses and nursing assistants are needed. Employers claim they factor in the severity of patients’ conditions—but “virtually none of them do,” Borsos said.

Of course, the employer sets up the software—and decides whether to “staff like you’re the Waldorf Astoria” or “like you’re a Motel 6,” as Borsos put it. Guess which most hospitals choose.

Standardization goes beyond staffing formulas, as hospitals try to script the conversations staff have with patients. The script goes something like, “I’m very glad you’ve come here for care. Do you have any questions? I have time to answer them. Put a number on your pain,” McEwen said.

“It’s a form of time management that is insulting to professionals, and actually increases the risk of harm.”

Like employers in other industries, hospitals are pushing for schedules that maximize “flexibility”—theirs, not yours.

“They can’t bear for people to have downtime,” Sheridan-Gonzalez said.

Some float staff from one unit to another, especially at night. Others send workers home mid-shift.

Lean restructures may include staggered schedules where one person starts at 6 a.m., the next at 6:30, and so on. Borsos called it “pseudoscience, to try to fit everything into a nice, neat, easily measured box.”

The Holy Grail of flexibility, of course, is keeping staff on call, with no set schedule and no guaranteed hours. A growing share of cafeteria workers at St. Charles in Oregon are “float,” meaning they could work as a day-shift cook one day and a swing-shift room service attendant the next—and be paid less than either.

“Traditionally in hospitals the number of on-call or per diem staff is somewhere between, say, 10 and 15 percent,” Borsos said. “The newest trend is allowing hospitals to take more and more benefited positions and make them flexible and contingent.”

Part of the lean ethos is getting workers to participate in their own exploitation. Some hospitals offer nurses a boost of pay and status for championing a lean project.

What can the union do? First is to educate members to see through management’s hype—what labor educator Charley Richardson called the “tricks and traps” designed to lull you into believing you and management have the same concerns at heart. These include joint brainstorming, win-win rhetoric, and trust exercises.

One strategy is to try to get your people onto the lean team—but they probably won’t be picked, and it’s a “slippery slope,” Sheridan-Gonzalez said. Union members on joint committees should treat every meeting as if it were a bargaining session, with two opposing sides.

They can say, “We don’t accept your framing. We see this as a potential for harm,” McEwen recommends.

And the usual union tactics can be used against lean, too: petitions, forms that document unsafe staffing, button/sticker days, and marches on the boss to resist speed-up.

Labor Notes’ book Working Smart offers a thorough analysis of lean and how to fight it. Download Charley Richardson’s manual “Employee Involvement: Watching Out for the Tricks and Traps.”

A version of this article appeared in Labor Notes #412, July 2013. Don't miss an issue, subscribe today.