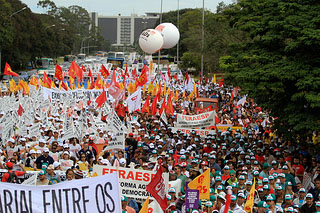 The enormous protests in Brazil share the spirit of the Arab spring. We don’t know what will happen next, but just a short time ago the huge mobilizations of the last three weeks would have been completely impossible to predict.

Everything began in the largest city, São Paulo, on June 6. A movement led by youth groups organized as the Free Fare Movement (MPL—Movimento Passe Livre) called a mobilization against an announced fare increase of R$3 to R$3.20 (nearly U.S. $1.50) on buses, subways, and trains.

The first two protests, on June 6 and 7, gathered more than 1,000 students and the Subway Workers Union of São Paulo.

The subway workers had already been fighting for a new contract and linking that struggle to fighting any fare increase. For two weeks nearly all subway workers had taken off their uniforms and instead worn a vest opposing increases. They handed out 100,000 copies of three leaflets to passengers in central subway stations in São Paulo. On June 6 Union President Altino Prazeres Melo was arrested, together with other protesters.

By the third day of the demonstrations, June 11, the protesters had increased to 10,000. The repression of the police was aggressive, even violent, which caused more students to come out the next time.

The fourth protest, on June 13 in downtown São Paulo, was even more violently repressed by the police. The more than 30,000 young people on the streets that day were met by rubber bullets, bombs, and tear gas launched by riot police squads. Hundreds were injured, seven big press journalists among them. Nearly 200 were arrested. The violence horrified the Brazilian population.

As a result, the demonstrations expanded throughout the whole country. A quarter of a million people, in many cities, came out on June 17. Large demonstrations were held in all other major capitals.

By this time, the reasons for the protests had expanded. People held placards with many different messages. They were angry not only about transportation fares but about government corruption, the amount of money being spent for Brazil to host the 2014 World Cup, lack of money for health, education, and affordable housing, anti-gay measures supported by a parliamentary commission, and more.

The city governments of São Paulo, Rio de Janeiro, and other cities gave in and rescinded the fare increase.

It was not enough. Feelings were running too high. The mobilizations didn’t end; they continued, in more than 100 cities, including São Paulo, Rio de Janeiro, Brasilia, Recife, Porto Alegre and São Jose dos Campos, on the evening of June 20. According to the media there were 1.25 million in the streets. At first there were no incidents, but in the end, there was repression in several cities.

This week, the people in the streets won other gains. All royalties from the new oil fields found along the Brazilian coast will be delivered to public education and health care. Bill PEC 37, meant to hinder corruption investigations by public prosecutors, was defeated. Other concessions are on the way.

But the demonstrations continue.

Unions in the Movement

Most unions didn’t join the mobilizations in the beginning.

Then CSP-Conlutas, a left-wing labor federation, and CUT PODE MAIS, a dissident caucus within the largest federation, CUT, together with other organizations, called for a day of action June 27.

That day General Motors workers, together with metalworkers from seven other plants in Sao Jose dos Campos, did a one-hour stoppage. Construction workers demonstrated in Belem and Fortaleza. In Rio de Janeiro, 10,000 workers and students demonstrated throughout downtown. In Belo Horizonte, the unions joined the huge demonstration of 60,000 in front of a football stadium where the Confederation’s Cup match was scheduled.

Simultaneously seven Brazilian labor federations along with the Landless Movement (MST) met and declared a National Day of Struggle and Mobilization for July 11. Even the CUT, which has been very loyal to the government, joined the call under the pressure from the streets—although it is not clear how far the CUT will take the struggle.

The demands include reducing fares and improving the quality of public transportation, more investment in public health and education instead of the huge expenditure of public money on the World Cup scheduled for next year, opposition to auctioning off Brazil’s petroleum reserves to private companies, reduction of working hours from the current 44 hours per week, stopping a bill to legalize outsourcing, and land reform, which has been frozen by the administration.

Wednesday morning, union leaders met with President Dilma Rousseff. The president did not address any workers’ demands but called for reform of electoral laws.

Her party, the Workers Party, was elected in 2002, raising workers’ expectations—which were not met. Although some measures in favor of the poor were taken, such as bolsa-família (an allowance for the very poor), the administration has carried out neoliberal policies benefiting big landowners, banks, and foreign corporations.

Labor has already benefited from this summer’s wave of protests, which will strengthen upcoming struggles for new contracts (held every year). We’ll see how labor’s role develops as the mobilizations continue.

Claudia Costa is a labor journalist and a communications advisor for the CSP-Conlutas labor federation.

CORRECTION: This article has been updated to correct the spelling of President Rousseff's name.