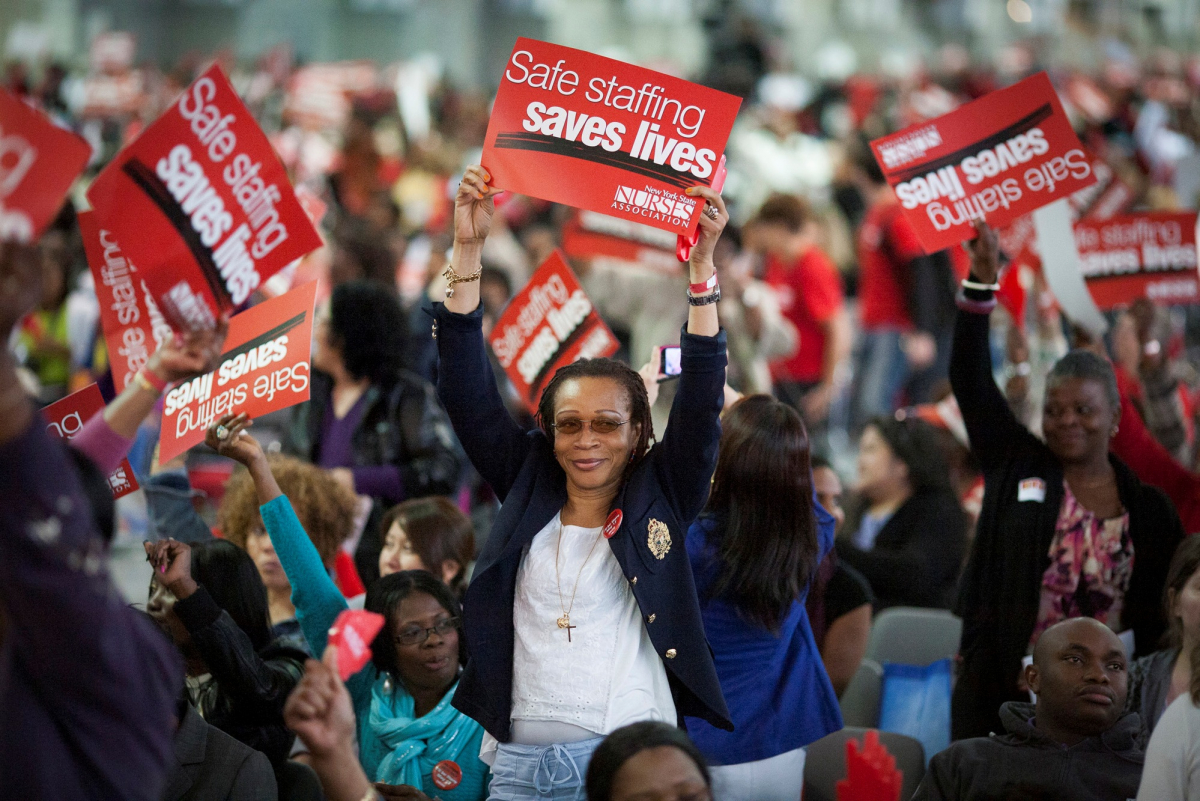 Reformers won control of the board in the 37,000-member New York State Nurses Association last year. At this membership meeting, the nurses changed their bylaws to put bedside nurses squarely in control of the union. Photo: Andrew Hinderaker.

The sight of tens of thousands of striking teachers and their allies marching through the streets of Chicago last fall had a back-story, a little-discussed trend in organized labor—reform movements.

Leaders of the Chicago Teachers Union had come to power as part of a vibrant internal movement, the Caucus of Rank-and-File Educators. Dozens of reform groups like CORE have sprouted up across the country in the last five years—to challenge unresponsive leaders, resist concessions, build ties with the community, and promote internal democracy and member control.

What explains this resurgence? First, today’s reformers are often the latest manifestations of longtime currents.

Ron Carey, who won the first direct election for Teamsters president in 1991, campaigned from his position as president of New York’s Local 804. Sixteen years later a new crop of reformers emerged there, calling on the Carey legacy and making its name by stopping local pension cuts at UPS. The Members United slate is now in its second term.

In Chicago, CORE’s 2010 election run drew veterans of an earlier caucus that came to office in 2001. That caucus lost after one term, but the experience proved invaluable to CORE’s election bid—and to keeping on track once in office.

Some new reformers are pushing to correct earlier efforts that went off track, as in the case of New York’s subway and bus union, where the New Directions caucus elected Roger Toussaint president in 2000.

Though the product of a rank-and-file-oriented movement, Toussaint veered toward a top-down leadership style. Pushback and fallout from the union’s poorly prepared 2005 strike drove New Directions veterans to challenge Toussaint’s hand-picked successor. The Take Back Our Union caucus swept into office in 2010 and was recently re-elected.

The same dynamic was at play in 2011 when AFSCME 3299 board members and worksite leaders formed the Members First slate in the service workers union at the University of California. They contended that incumbents, who had been part of revitalizing a moribund local a decade earlier, had lost touch with the rank and file and were making too many concessions. Members First won five of the local’s six top offices.

While some reform efforts are spearheaded by longtime activists, principal officers in their forties and even younger are common among today’s reformers.

A second factor is fallout from the management push for givebacks. Unions’ inability to counter short-staffing and wage cuts has bolstered the appeal of reform candidates who promise to stand up to the offensive.

One example is Rebuild 1101, which swept elections in New York’s largest telecom local, at Verizon, in 2011. Ten of the previous administration’s 13 top officers were retired and had lost touch with what the rank and file were facing, particularly speedup.

The election was also colored by that summer’s two-week strike, where the national union made the controversial decision—supported by the local’s old leaders—to return to work without an agreement and with Verizon still pushing concessions.

A similar example comes from the Public Employees Federation of New York, where members angry over concessions and a new tier in state pensions ousted incumbents in favor of the NY Union Proud slate.

A third factor is member disgust at blatantly authoritarian or corrupt leaders.

For example, the New Leadership slate in Chicago’s Teamsters Local 743 made rooting out corruption and organized crime a pillar of its successful 2008 campaign.

The same challenges faced the New York District Council of Carpenters, under federal monitorship since the 1990s for corruption and mob involvement. In 2011, after the previous head of the local pled guilty to accepting kickbacks and bribes and a stronger oversight program was imposed, longtime reformer Mike Bilello was elected secretary-treasurer.

Carpenters reformers are also battling a wave of centralization. President Douglas McCarron has removed most vestiges of local control by creating regional mega-locals.

A similar move to consolidate power over locals was at the center of turmoil inside the Service Employees, who placed their third-largest, United Healthcare Workers West, in trusteeship in 2009.

Local leaders formed the National Union of Healthcare Workers, which rejects “partnership” with management. NUHW has attempted, unsuccessfully thus far, to replace SEIU as the union for 45,000 service and technical workers at the Kaiser Permanente chain.

By a conservative estimate, in the past five years reformers have taken office in locals representing upwards of a half million members—from UPS Teamsters in New York City to University of California grad employees.

Large public sector locals include the Chicago Teachers, the 37,000-member Transport Workers local for New York subway and bus operators, and the 50,000-member Service Employees 1021 in the Bay Area.

Private sector examples include the 7,000-member Communications Workers 1101 at Verizon in New York and 250-member Longshore 1410 in Mobile, Alabama. Even in the building trades, where reformers have often faced blacklists, insurgents have been elected, such as in 4,000-member Pipefitters 290 in Portland, Oregon, and the 22,000-member New York City District Council of Carpenters.

Beyond the local level, the 37,000-member New York State Nurses Association, the 54,000-member Public Employees Federation of New York, and the 120,000-member California Federation of Teachers now have reformers in charge. And in late 2010, longtime reformer Larry Hanley was elected national president of the 190,000-member Amalgamated Transit Union.

The desire for member control also fueled a slate of bedside nurses in the New York State Nurses Association, who won a board majority in 2011. Reformers organized a 2,000-person special membership meeting to overhaul the bylaws, which had allowed supervisors to serve as board members and left power in the hands of staffers.

Long before the onset of the economic crisis in 2008, it was clear that neither the original revival promised with the 1995 AFL-CIO election of John Sweeney and his New Voices slate, nor the more centralized version of the rival federation Change to Win, could catalyze a labor upsurge.

Ironically, as structures of the institutional labor movement fractured and atrophied, more space was created for local leaders and rank-and-filers to experiment, looking less to their state or national bodies for guidance or permission.

But reformers also face a host of challenges—some more acute precisely because of the reform principles that propelled them to run in the first place.

First is the members’ mindset. The generation of unionists schooled in an earlier era of conflict and routine rank-and-file activity is fast disappearing.

Reformers may aim to transform the relationship between members and their union, but most rank-and-filers are more familiar—and comfortable—with the union-as-lawyer model than with unions as vehicles for self-organization and collective action.

A second serious challenge is that of running the union. Few jobs—whether teaching special ed, pulling telephone cable, or working in the ER—prepare new officers for the avalanche of responsibilities that comes with administering a union, particularly one with dozens of staff and a multi-million dollar budget. The pressure is even greater for officers who try to work their jobs and run the union, too.

For officers overwhelmed with the steady stream of details and fires to put out, little time remains to develop more leaders or invest in long-term planning. Promised changes can fall by the wayside.

Third, new leaders may meet suspicion from higher-up officials and staffs resistant to change. Fourth, many find out, once in office, that the only tie binding reformers was the shared desire to oust their predecessors. Such divisions can derail the reform agenda entirely.

Of course, the greatest challenge facing reformers is the stunning power imbalance between employers and unions, which can throw a wrench in the best-laid plans.

Despite these challenges, more unionists are taking on the job of reform, pushed by the desire to save their unions and keep employers from implementing their unfettered agenda. In the process they are bucking the conventional wisdom that workers should live with less than previous generations.

A longer version appears in the Spring issue of New Labor Forum.