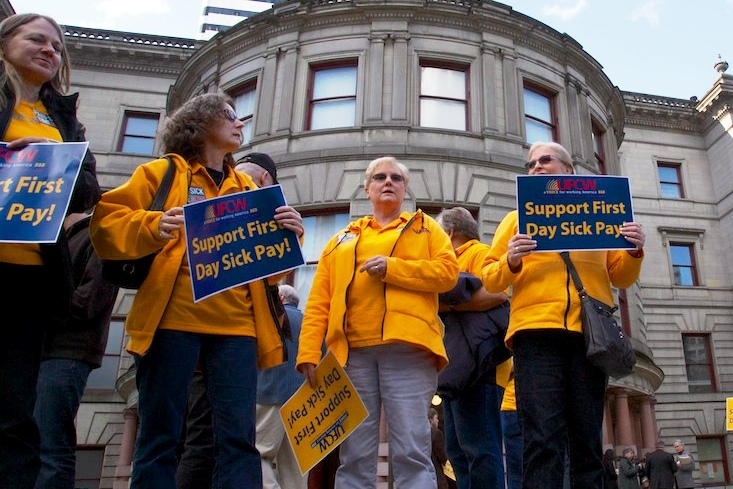 Food and Commercial Workers rallied outside the Portland city council for a city-wide measure for paid sick leave. It passed unanimously in March. Photo: T. A. Barnhart.

Will the U.S. join the rest of the world and guarantee workers paid sick leave?

A bill in Congress is stuck, but momentum is building. Four cities and Connecticut have passed sick leave provisions since 2007, with New York City passing a bill May 8. Active campaigns by unions and worker groups exist in 20 other jurisdictions, including Massachusetts and Illinois.

The coalitions include unions such as the Food and Commercial Workers and the hotel workers (UNITE HERE), Jobs with Justice, public health groups, and worker centers like Young Workers United in San Francisco, Make the Road in New York, and the Restaurant Opportunities Centers (ROC).

In Philadelphia, the idea for the citywide campaign came from union organizing efforts. As campus and museum security guards

Employer groups are resisting, led by the National Restaurant Association and other employers in the hospitality industry.

The measures passed have been measly by international standards, providing one hour of paid leave for every 30-40 hours worked and generally capping required leave days at five to seven per year. Most exclude small businesses and even carve out various industries. They do include time off to care for family members, though.

In many low-paid jobs, it’s hard to take a sick day, paid or not. “The concept does not exist: there is no sick time,” said a Michigan line cook interviewed by ROC.

“You come to work either way. If you don’t come you don’t get paid, and if you stay off too long you get fired. That’s it.”

136 OTHER COUNTRIES HAVE IT

In 51 countries, you get more than 75 percent of your pay while you’re sick, while in 31 countries workers get full pay. In many short-term cases, and almost always for long-term leave, the government pays, not the employer.

In the U.S., the 1993 federal Family and Medical Leave Act (FMLA) covers about 54 percent of the workforce—mostly full-timers at larger employers—but many workers can’t afford to take the FMLA’s unpaid leave, and it doesn’t apply to short-term illnesses or injuries.

There is no national law on sick pay, and 40 million people work in jobs with no paid sick days at all, including around 40 percent of the private sector workforce.

Among Philadelphia restaurant workers surveyed by ROC, for example, 92 percent had no paid sick leave. Nationally, the figure was 88 percent.

The real number may be higher, because many workers have paid sick days in name only.

Walmart workers say theirs are almost impossible to take, because they get written up for taking them, even if they follow the rules exactly.

“All absences, including sick days, are counted as grounds for discipline up to termination,” said Venanzi Luna, a California Walmart worker and member of OUR Walmart, which is trying to raise wages at the retail behemoth.

Demerit systems that include excused absences are very common, said Eileen Appelbaum, a specialist on leave policies at the Center for Economic and Policy Research.

Such employer penalties conflict with the no-retaliation rules of the FMLA, though, so employers have slowly adjusted their policies, Appelbaum said. Employers who don’t adjust create a bizarre incentive for workers to take several days of unpaid FMLA leave because it won’t count against them, instead of simply taking one or two employer-paid sick days.

The new city laws also generally have a no-retaliation clause—but it’s unclear, Appelbaum said, whether that protects workers if company policy is to penalize workers for any absence.

New York City is the latest to gain paid sick leave, which advocates hope will create momentum nationally. City Council Speaker Christine Quinn, a Democrat, had blocked a sick days bill vote for three years, despite veto-proof support on the council. Quinn portrays herself as a champion of small business and claimed the law would hurt small companies.

She flipped this year because she is running for mayor, and worker advocates, unions, feminists, and her Democratic primary opponents were lambasting her in the press.

Finally, in late March, Quinn announced a watered-down deal creating sick pay at the rate of one hour for every 30 hours worked, at businesses with 20 or more employees. A year and a half later, those with 16-19 employees would be included. But if the economy dips again, the legislation could be annulled.

Even worse, restaurant workers and other shift workers would not have a right to paid sick time if they pick up an extra shift, according to the Food Chain Workers Alliance. “Picking up extra shifts is how many of these workers survive,” said Daisy Chung of ROC in New York. “Now, they are required to forego an extra shift if they take time off for an illness, or be denied pay for their sick day. We also expect that some employers will manipulate this provision to their advantage to avoid paying for sick time.”

Manufacturing is entirely exempt. The argument goes that next-door Connecticut, which has the only state paid sick-leave law, also exempts manufacturing, and New York doesn’t want to lose jobs to Connecticut.

Connecticut’s other exemptions are many—nonprofit workers, day laborers, temps—and the benefit applies only to employers of more than 50.

Other cities inserted big exceptions, too. In Washington, D.C., the 2008 measure exempted tipped wait staff and bartenders—a galling exclusion for ROC activists, who have led the sick-day agitation in several cities, including D.C. and Miami.

Most ordinances make exception for workers who use hiring halls, like the building trades. Due to the transitory nature of construction work, mandating those short-term employers to provide sick leave is unworkable, construction unionists say.

The strongest measure is San Francisco’s, which covers employers of all sizes. It’s strong because it was passed by a ballot initiative, said organizers with Young Workers United, a worker center that led the effort. All the other successful measures have been written by lawmakers.

YWU agitators said they steered away from stoking fears of sick workers infecting consumers. “We didn’t want to demonize workers and appeal to consumer fears about illness,” said YWU member Naomi Nakamura after the 2007 victory. “Instead, we wanted to show how sick days are a human right and necessary in a caring, compassionate community.”

ROC, however, is showcasing the argument that ailing restaurant workers can infect patrons and each other.

An important provision in New York City’s ordinance—if it is enforced—is that you can’t be fired for calling in sick, no matter the size of your employer.

Fear of being fired and lost wages are the main reasons workers come to work sick. In a Public Welfare Foundation-funded study in 2010, 16 percent of a national sample of workers said they had lost a job because they got sick.

In the Philadelphia restaurant survey, 64 percent said they’d worked while sick or injured in the last year, with 42 percent citing “fear of termination” if they took days off to recover.

In Philadelphia city council hearings, workers testified about being forced to work through injuries. A restaurant worker suffered a deep gash but his boss told him to wrap his hand and keep working. After the wound kept bleeding during three hours of cooking and washing dishes, he finally left—under threat of firing—to get stitches.

Even when laws pass, the burden is on workers to enforce them. “The whole law is complaint-driven, so workers have to take the initiative,” said ROC’s Rodriguez.

Having a law to back you up does help, he said: “Three to four pissed-off workers confronting an employer with the law behind you will often set the ship straight.”

Telecom giant Comcast, which has its headquarters and 6,000 workers in Philadelphia, spent more than $100,000 attempting to defeat paid sick leave there. Despite the pressure, the city council passed the measure in March, 11-6. Then, for the second time in three years, Mayor Michael Nutter vetoed it. A union-led effort to get one more vote for a veto override failed.

Although Comcast gives its own workers paid sick days, the company contracts out a lot of work to employers who don’t.

Judging from the employer reaction, the spread of ballot measures for earned sick time is particularly vexing to employers. A popular measure in Orange County, Florida, was blocked when the city council removed it from the ballot, and in early May the Republican-dominated state legislature passed a law to outlaw all such local sick-leave ordinances.

A version of this article appeared in Labor Notes #410, May 2013. Don't miss an issue, subscribe today.