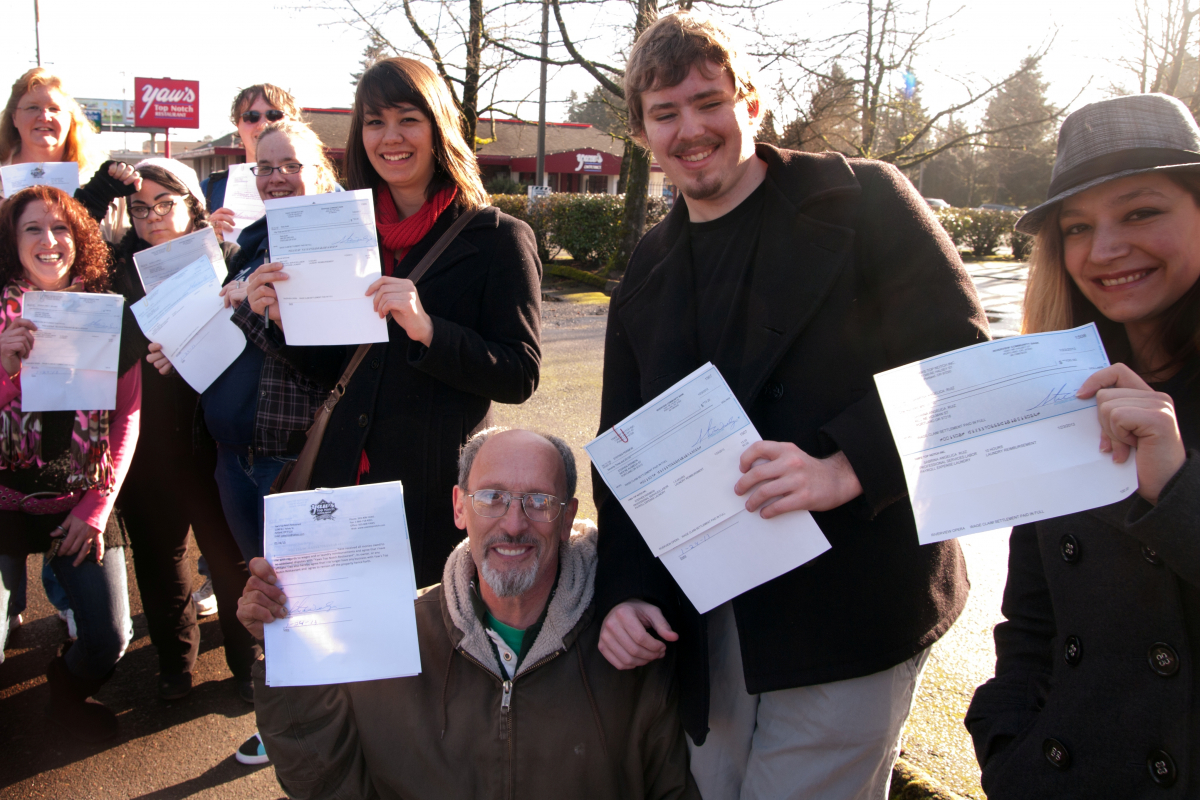 Wage theft—the illegal underpayment or non-payment of wages owed—affects workers across all industries, but is especially rampant in restaurants and construction. Low-wage workers are often forced to work off the clock, before and after shifts, and through meal and rest breaks.

It’s difficult for unions to win contracts at these small, insecure worksites, so our foremost tool for getting quick victories and asserting power in the workplace is direct action.

We Are Oregon, a community organizing project funded by Service Employees Locals 503 and 49, has been fighting wage theft for two years. We built a committee of community members who believe in direct action as a primary tactic. The committee grew as more workers won back their stolen wages and then stayed involved to support others.

So far, we have won almost every campaign, worked with dozens of wage theft victims, and recovered more than $6,000.

THEFT WITHIN THE FAMILY

Recently we organized with workers who had quit or been fired from Yaw’s Top Notch Restaurant, a nostalgic, 1950s-style diner that boasts “a staff that is more like a family than it is like a workforce.”

We Are Oregon’s approach doesn’t use courts or government agencies.

One reason is that the agencies charged with protecting us from workplace abuse, such as state and federal labor departments, have been defunded over the last 40 years. The agencies can take on few cases—and even these often take months to resolve.

Direct action tends to produce faster results. In many cases, workers are paid just days after the first community delegation.

Immigrants and day laborers are especially susceptible to wage theft. For undocumented folks or those working off the books, a community response can be much safer than a formal claim—and more powerful.

But some family members were having their wages stolen. Workers had been required to attend unpaid meetings, and the restaurant illegally deducted money for “uniform fees,” taking some below the minimum wage. Others were missing tips out of their paychecks.

Altogether, the 10 who came together with We Are Oregon and Portland Industrial Workers of the World were owed about $1,300.

Our model for fighting wage theft is simple and classic. Direct action organizing looks a lot like a strong union fight—but on a scale that any worker could take on.

People experiencing wage theft find out about us through street leaflets, radio promotions, and word of mouth. The workers must document their case and be willing to organize and go public. The bigger the boss or the smaller the number of workers, the more community members you will need to support you, but 10 to 15 is a good start.

WRITE UP YOUR DEMANDS

—They would include any worker who provided substantive evidence for a theft claim.

—They would include only workers who would attend the group’s public actions.

—If the boss tried to pay off one or some of them, they would refuse the money until everyone in the group was paid.

MARCH ON THE BOSS

Next, workers and supporters deliver the demands.

The Yaw’s workers organized themselves and 30 community members. We met a few blocks from the restaurant. Workers took a moment to tell the crowd their stories, and volunteers from the committee filled everyone in on the plan.

The first demand delivery can be relatively low-key. It sends a message that workers are taking action, community members support them, and if the boss decides to fight, we’ll be back.

The crowd marched to Yaw’s. In the lobby, a young man read the demand letter, saying how much the workers were owed and that the community was here. Although the Yaw’s bookkeeper tried to cut him off, he read on. We videotaped the letter-reading and the boss’s response.

Volunteer organizers initiated the solidarity clap, signaling it was time for the delegation to leave for a quick debrief. We left the letter and documentation of wages owed with the bookkeeper.

Within days, the manager was calling some workers and offering to pay them, but not others. Everybody held firm: “You pay all of us at once, or we’ll continue our campaign.”

To help workers get comfortable telling their stories, organizers ask open-ended questions about the workplace and how wage theft affects their lives, then give feedback on the most compelling points.

Often we shoot a short video the day we deliver the demands. Each worker is interviewed on camera about their wage theft story and reaction to the day’s events. We share this video online to increase pressure on the boss.

We keep escalating with leafleting, community pickets, social and traditional media stories, and larger delegations, choosing the sequence so that each action brings a little more pressure than the last.

Our maxim is, “The boss will never give in because of the thing you did yesterday, but because of what he is afraid you will do tomorrow.”

One week after the letter delivery, as workers were preparing to leaflet outside Yaw’s, management relented. The boss agreed to a time for the workers to walk into the restaurant as a group and collect their full checks.

“I honestly believed I would never see a cent of the money I was owed,” said worker Alicia Carroll. Management had ignored her when she complained alone.

IN THE UNION WORKPLACE

Union members can easily adapt these tactics. Direct action can be as simple as organizing five or 10 co-workers to march into the boss’s office to file a grievance or to demand a change in working conditions—no grievance needed. In fact, because of contract protections, union workers often have more latitude to use direct action than non-union workers.

Though such tactics are confrontational, in our experience, problems get solved quickly, feelings of solidarity grow, and workers immediately feel powerful. As our union forebears put it: Direct action gets the goods.

Aaron Giesa and Kari Koch are organizers with We Are Oregon. Co-worker Angela MacWhinnie also contributed. Over the next few months, wage-theft organizing will be taken over by the all-volunteer Portland Solidarity Network and won’t rely on paid staff at all. Find them at portlandsolidarity.org.

A version of this article appeared in Labor Notes #409. Don't miss an issue, subscribe today.
Related
Work Saturdays, Huh? How UPS Drivers Resisted by Complying »
In Likely Last Battle, Korean Welder Who Occupied Crane for 309 Days Fights to Win Her Job Back »
‘No Increase? No Work!’ Toronto Health Care Workers Save Pandemic Premium via Job Action »
A Brief History of Harlan County, USA »
Kentucky Miners Are Camped Out on Railroad Tracks, Blocking a Coal Train, Demanding Their Stolen Wages »