Home Is Where the Fight Is 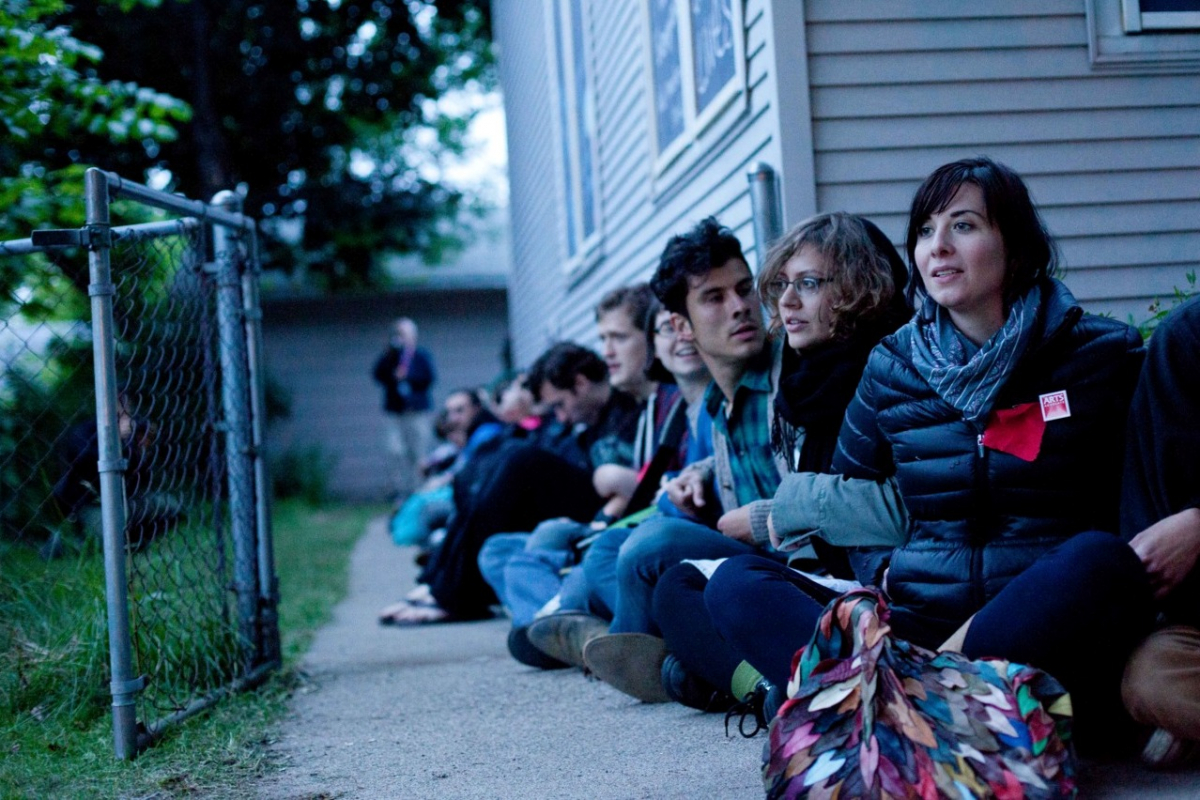 It took police four tries to evict the Cruz family in Minneapolis. After 39 arrests, the police broke the door down at 4 a.m. Many defense attempts have prevented evictions and saved homes. Photo: Peter Leeman.

Ramon Suero fell behind on his mortgage payments after he got fired for organizing a union.

Suero, a hotel worker and UNITE HERE Local 26 member in Boston, got his job back after a year. But then his wife had to quit hers and travel to the Dominican Republic to care for her sick mother—and they fell further behind.

They applied to modify their home loan, but federally sponsored mortgage company Freddie Mac said no, foreclosed, and demanded the family get out by February 1.

“I want to send a message to the banks: we deserve a second chance,” Suero said. “That’s why I decided to fight—not only for my family, but for our community.”

Local 26 members and activists from the housing justice group City Life/Vida Urbana vow to thwart the eviction with a human blockade if necessary.

In the wake of Occupy, the tactic is spreading. Activists around the country are placing their bodies in the way of police doing the banks’ dirty work.

In the Twin Cities, supporters get text-message alerts from the grassroots group Occupy Homes MN and mobilize quickly to stop surprise evictions.

It took Minneapolis police four attempts—and 39 arrests—to evict the Cruz family last spring. When they showed up at 4 a.m. and attacked the front door with a battering ram, 60 volunteers held them off.

The whole effort cost the city $40,000, and activists carried the battered door down to city hall to shame elected officials for the misuse of public resources.

“It becomes really politically costly—both to the banks who are creating this kind of chaos, and also to city politicians,” said organizer Nick Espinosa.

Many foreclosure resisters his group works with are current or former union members—like Monique White of Service Employees (SEIU) Local 26, who lost her youth-counselor job to state budget cuts. White kept her house after she confronted the U.S. Bank CEO in front of 200 shareholders.

When they evict you in Detroit, they bring a dumpster to throw away your belongings. That’s how the Cullors family found out they were being evicted last Halloween: the dumpster showed up.

The family had struggled to pay its mortgage after Jerry Cullors, a retired bakery truck driver, suffered wage and pension cuts in the run-up to Wonder Bread’s bankruptcy.

So Eviction Defense Committee activists improvised: they filled the dumpster with bags of leaves. The sheriff had to call for another dumpster—buying allies just enough time to win a stay of eviction in court that morning.

A month later, after a march on the bank and a packed court hearing, Fannie Mae backed off and told Bank of America to negotiate a modified mortgage.

Like millions of other homeowners, at the time of their default the Sueros were “underwater”: they owed more on their mortgage than the house was worth.

Freddie Mac has already lost the money. It will have to resell the house at today’s fair market value, about $80,000, down from $283,000. The question is who will benefit from Freddie’s loss: the Sueros, or some hedge fund investor who buys up the property?

The Sueros want “principal reduction”: a new loan based on the house’s current value. A community bank has offered to buy the house from Freddie for $90,000 and sell it back to the Sueros on those terms.

Fannie and Freddie, which own or insure a majority of home loans in the U.S., could save taxpayers billions by adopting principal reduction, a Federal Housing Finance Agency study found last year.

This is because, when a homeowner defaults on a mortgage backed by Fannie or Freddie, taxpayers are on the hook to pay back to the bank all the money still owing on the original mortgage. If the principal is reduced, odds are better the homeowner will be able to keep making payments and avoid default (or re-default).

Bush appointee Ed DeMarco—who still heads the FHFA—says no to principal reduction. His policy is not to sell back to foreclosed homeowners, because that would create a “moral hazard,” encouraging others to follow their example.

“They’re concerned that people will get the wrong idea and strategically default,” said Steve Meacham, lead organizer for City Life. “From our point of view, it’s the right idea. The banks caused the housing crisis. They should pay for it.”

And talk of morality seems laughable from an institution that fueled the rampant financial speculation that caused the housing collapse. Community groups are lobbying the president to replace DeMarco.

DOWN FOR DIRECT ACTION

Supporting the Sueros was a no-brainer for UNITE HERE Local 26 President Brian Lang. The union has long worked on housing issues. It negotiated a housing trust fund in the late ’80s to help members make down payments—and lobbied Congress to allow this.

Help from the fund “has made the difference for many in being able to own homes,” Lang said. “We see our union as trying to transfer wealth to our neighborhoods and communities.” Local 26 has begun comparing its member list against foreclosure lists to identify other potential resisters.

Harris was a Teamster for 20 years, so organizers encouraged him to reach out to his union brothers. Teamsters and Jobs with Justice members started coming to rallies to support Harris, doubling or tripling Occupy Our Homes’ usual turnout.

“It’s exciting working with Teamsters, because they’re more than down,” Occupy Our Homes organizer Tim Franzen said. “They understand direct action. The lengths they’re willing to go to protect one of their brothers is pretty far.”

You don’t have to look far to see the connection between workplace and housing struggles. People lose their homes or get evicted from rentals because of unemployment, underemployment, low wages, or health care bills.

“Anyone who’s facing a housing crisis will also have a job crisis story to tell you,” said Tony Romano, organizing director of the national coalition Right to the City Alliance, many of whose member groups fight foreclosures.

So political education is key. “One of the big things is always breaking down the shame,” said Malcolm Chu, lead organizer for the Massachusetts group Springfield No One Leaves. “So many members come into our space and say, ‘It’s my fault. I should have done better.’”

In reality, “everybody who got a loan in the bubble is a predatory loan victim,” City Life’s Meacham argues, since housing prices were inflated by rich speculators. “When the 1% don’t know what to do with their money, they speculate and cause bubbles.”

“It’s another example of the banks trying to generate ridiculously huge profits for investors, at great cost to everyone else,” agreed Ron Patenaude, president of United Auto Workers Local 2322, representing health and human services workers in Western Massachusetts.

His union supports Springfield No One Leaves with turnout and what financial support it can muster. A few union members are working with SNOL to fight their own foreclosures.

The solidarity goes both ways. When Verizon workers struck against concessions in 2011, SNOL invited union members to explain their issues to housing activists.

Activists occupied the sheriff’s office in Portland, Oregon, in January until he agreed to pursue a moratorium on foreclosure evictions.

The win showed that “what works is demanding and taking action, not asking nicely,” said Angela MacWhinnie, organizer with We Are Oregon, a branch of SEIU’s Fight for a Fair Economy, “because we had asked nicely for over a year.”

In We Are Oregon’s network of rapid responders, volunteers take shifts answering the distress hotline and staying at resisters’ houses, so no one has to be home alone when the riot cops show up to evict—“and the people getting support commit to come help others,” MacWhinnie said.

The freedom of strategy is a refreshing change from worksite fights, she said. Labor law imposes heavy penalties for some of the most effective union tactics, such as sit-downs or intermittent strikes.

Last year City Life toured to 12 cities to spread the model. Romano says Right to the City Alliance plans to invite unions to join a national campaign, One Million Homes for People Not Profit—targeting not only foreclosures but also high rents, unstable public housing, and homelessness.

He hopes to train unions in eviction defense and vacant home takeovers.

Organizing works: activists consistently force the banks and mortgage lenders to back off specific homes. “But for every case we win, there’s probably a thousand people who don’t fight back and who lose their house,” said Dianne Feeley, active with Detroit’s Eviction Defense Committee. “We need a systemic solution.”

Her group calls for Fannie and Freddie to halt all evictions and start doing principal reductions. The committee is also launching a federal court challenge, arguing that Fannie Mae’s foreclosures violate the constitutional right to due process.

In Atlanta, Franzen too is envisioning next steps.

In neighborhoods that are falling apart, it wouldn’t be hard to “liberate” vacant homes—whether buying them cheap, getting them donated, or “straight-up taking them in militant direct action,” he said. But the houses need serious rehab.

He’d like to unite with unions and “force the city to invest in those communities by hiring folks in those neighborhoods to fix up the houses,” he said. “We need a solution like that, that creates jobs and puts people in homes at the same time.”

To learn how a union can start or join a coalition to fight foreclosures, see City Life’s organizing manual, or contact Right to the City Alliance, righttothecity.org.

This article has been corrected from the print version: activists filled the dumpster in Detroit with bags of leaves, not bags of weeds, and in City Life's model the Sword is public protest and the Shield legal defense (not the other way around).


A version of this article appeared in Labor Notes #408, March 2013. Don't miss an issue, subscribe today.