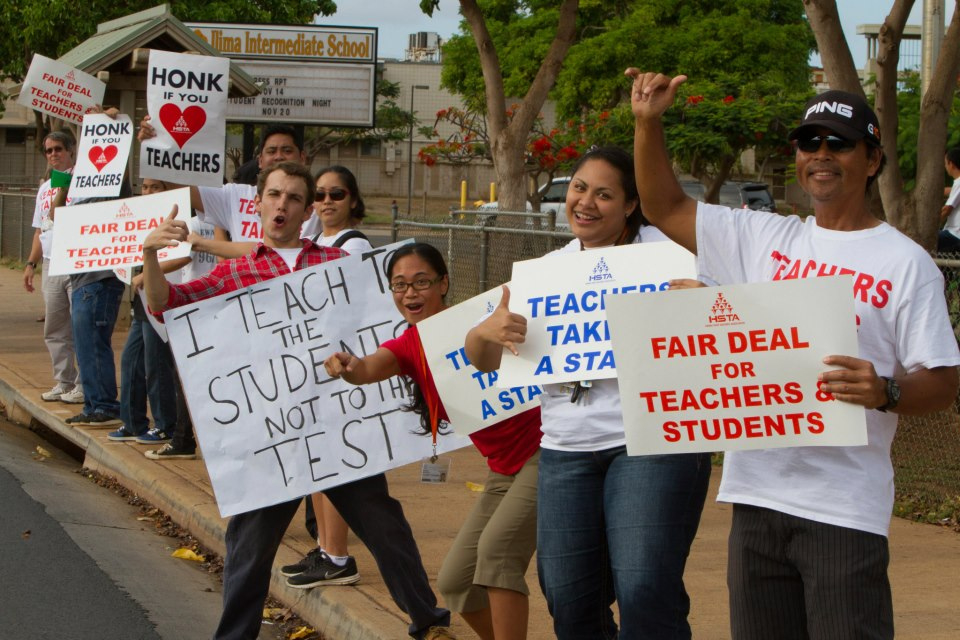 Every Thursday, teachers in Hawaii are working strictly by the book, clocking out at 3. They're using the work-to-rule tactic to roll back the concessions they suffered in their last contract. Photo: Hawaii Teachers Work to the Rules.

Teachers across Hawaii are getting the attention of school officials and their state legislature by exercising an old union tactic, work-to-rule. They added a local Hawaiian tradition, sign waving, to bring students and community members on board.

Two years after an imposed contract stuck them with wage and benefit cuts, the teachers are building momentum to win a better deal in 2013.

Each Thursday, teachers arrive exactly when school starts—which is late for most teachers, who plan lessons, make photocopies, and prepare for the day in the early hours. When school gets out at 3 p.m., they leave. On these weekly protest days, there is no after-school tutoring, grading papers, lesson planning, supervising clubs, or planning homecoming or proms with students.

Before and after school, the teachers gather to wave signs outside their schools, along roads, and over bridges, adapting a Hawaii tradition of waving signs to bring attention to causes, political campaigns, high school sports teams, and other community events. After the morning sign-waving session, they march into the school in unison.

What started at James Campbell High, Hawaii’s largest school, just outside of Honolulu, spread to 51 schools in two weeks.

Theresa Schubert heard about the protest from Campbell teachers and took charge of getting her Honolulu high school to join in the action. She knew the school would miss her in the afternoons—because she is the student activities coordinator.

“I know the truth,” she said. “If I were to clock out at 3 p.m. according to our contract, nothing would happen.”

If teachers, who are salaried employees, did not work with students after school and during their lunch breaks, said Campbell teacher Tammy Jones, “the clubs would stop. A lot of the students wouldn’t have any safe, productive activities.”

“In Hawaii we have an education problem,” said Corey Rosenlee, a 15-year Campbell High social studies teacher. “We don’t have enough teachers to fill the classrooms.”

Rosenlee was one of the initial organizers of his school’s work-to-rule protest. He blames Hawaii’s startlingly high teacher turnover rate on low teacher pay and morale. The state loses more than half of new teachers after five years. Nationally, the rate is much lower.

A starting teacher’s salary is $31,000 in Hawaii, compared to $47,000 in Chicago and $52,000 in Washington, D.C. Hawaii teacher activists argue the high cost of living in those cities is similar to that of Hawaii, a small but densely populated state.

Hawaii has a high number of teacher vacancies that are filled by “emergency” teachers, who work without a teaching degree and for less pay.

Like teachers in the continental U.S., Hawaii teachers are under pressure to accept performance evaluations based on standardized tests, said Doug Robertson, a fourth grade teacher in Waipahu. They are also facing cuts to health benefits and already low teacher salaries.

Teachers have already paid for the budget crisis in Hawaii, which has the only statewide school district in the U.S. They took cuts to pay and health benefits when Governor Neil Abercrombie imposed a "last, best, and final" contract offer in June 2011, forcing them to take the same concessions other public workers accepted.

The Hawaii State Teachers Association negotiated a compromise settlement, but members voted it down. The compromise would have included performance-based pay and changes to teacher’s evaluations, required for states to meet federal “Race to the Top” goals. It would also have started a two-tier system for teachers. For instance, new hires would get fewer sick days than veteran teachers would, said Robertson.

“They are trying to play us against future teachers,” he said.

The imposed contract expires in 2013. Teachers are mobilizing now so that these negotiations don’t end as badly as the 2011 negotiations did.

Robertson started prepping his co-workers to protest, even before he heard about the work-to-rule action at Campbell. “I went around after school, to almost every single teacher,” he said, “just asking people, ‘Is everyone as frustrated as we are?’”

Jones, who has a Ph.D. in education, said she was frustrated too. “I just felt stuck,” she said, after the union encouraged teachers to write letters to the governor. “We felt we needed to do a more aggressive action.”

High school teachers started meeting to discuss how they were going to bring more attention and action to their fight for a better contract.

Naming themselves Hawaii Teachers Taking a Stand, they picked the work-to-rule strategy to highlight how valuable teachers are by working only the minimum hours required in their contract. For teachers, like many workers, the eight hours required by their employer is only a portion of their total contribution to their schools and their students.

“What surprised us was how supportive the students have been,” Jones said. “They aren’t mad at us. They are out with us.” Students have joined in the action by meeting teachers after school and waving signs supporting their demand for a fair contract and fair pay.

Six hundred people gathered at Campbell High’s after-school protest November 15. Graphics teachers printed t-shirts with the slogan “You can’t put students first if you put teachers last” and signs for supporters to carry that read “Honk if you love teachers.”

Working to rule is a versatile tactic. Sometimes it is used to draw attention to a worksite issue like short staffing or unsafe conditions. It can also be a pressure point, letting the work pile up or slow down to push the employer to settle a contract. Communications workers used the work-to-rule strategy to stop concessions at Verizon in 2003. Workers at the Staley corn processing plant in Illinois used work-to-rule for nine months in 1992 and cut the plant’s production in half.

Hawaii state employees cannot legally strike until they resolve pending charges at the state labor board, so teachers turned to work-to-rule as a creative way to get the state government’s attention and build support among teachers and community members.

Schubert has bad memories of participating in the strike 12 years ago. “It was disheartening,” she said. “The public was not sympathetic. People were yelling at us, swearing. They said we were whining.

“I think this is a smarter way to go,” she said. “Raising awareness in the community, to try to get the public on our side first.”

Schubert, who is raising five children, is definitely feeling the budget cuts imposed on teachers. She wants to win a contract, but she also sees this as a long-term struggle. “Being a part of this is not just for me,” she said. “It’s for those who want to be teachers in Hawaii.”

Members of the hotel union, UNITE HERE, which has a large presence in Hawaii, came out to support sign waving protests at schools yesterday. The two unions have historically worked together. For instance, in solidarity with hotel workers, teachers boycotted Hyatt hotels when planning student events like proms.

Hawaii Teachers Taking a Stand has also drafted a bill, called “A Quality Teacher in Every Classroom Act,” which members are circulating around schools to offer their solution to the education crisis. The bill proposes to increase school funding, bring Hawaii teachers’ salaries up to par, impose a more objective evaluation system based on observation, and lengthen the school day.

Rosenlee said he is inspired by the diversity of approaches to resisting the current attacks on education—from the California ballot proposition that stopped education cuts by raising taxes on the wealthy, to the strike that won a pay raise for Chicago Teachers this year. “I tell people, ‘They were able to get an increase because they were able to stand up,’” he said.

Rosenlee emphasized the grassroots nature of the Hawaii teachers’ actions. “We came up with this on our own,” he said. “It’s a teacher-generated movement.”’