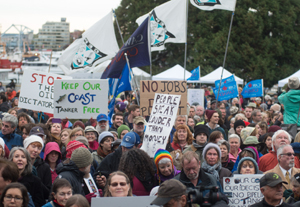 Unions joined environmentalists to battle a tar sands pipeline—this one headed for the pristine west coast of Canada. Even the union whose members work in the tar sands, Canada's CEP, opposes it. Photo: Keri Coles/Greenpeace Canada.

The U.S. presidential election has held up a decision on the Keystone XL tar sands pipeline, but in Canada, unions have joined environmentalists to battle another export pipeline—this one headed for the pristine west coast of Canada.

More than 3,000 protesters converged on British Columbia’s legislature in Victoria on Monday, demanding the development be stopped. When a speaker asked if they were willing to sit down in front of bulldozers to stop the pipeline, the crowd roared “Yes!”

The Enbridge Northern Gateway pipeline would ferry fuel strip-mined in Alberta to the port at Kitimat, British Columbia, where it would be loaded on tankers bound for Asia. Tar sands mining produces raw bitumen, a fuel the consistency of peanut butter. It must be heated to mine it and diluted with other fuel to pipe it.

Enbridge is dangling the promise that selling bitumen in Asia will boost Canada’s GDP by $270 billion in the next 30 years. Enbridge’s website says of the project, “It’s more than a pipeline. It’s a path to our future.”

That is exactly what union leaders in Canada are worried about. They say the conservative government of Prime Minister Stephen Harper is working with companies like Royal Dutch Shell to create a future in which Canada becomes chiefly an exporter of raw materials, like an underdeveloped colony, rather than keeping the manufacturing and refining work in Canada.

It’s a slippery slope to deindustrialization. Canada has lost 11 percent of its manufacturing jobs since 2008. Export of resources has driven up the value of Canada’s currency, making its manufactured exports more expensive to the rest of the world, said Jim Stanford, an economist for the Canadian Auto Workers.

Canada’s Communications, Energy and Paperworkers union represents workers in the tar sands and in refineries. But the union opposes both the Keystone XL pipeline, which would run from Alberta to the Texas Gulf Coast, and the Enbridge proposal.

While CEP wants refinery jobs to stay in Canada, the union cites harm to native communities and environmental reasons for opposing indiscriminate development of the tar sands.

“No one with any brains would say there should be unfettered [tar sands] expansion in Alberta or Saskatchewan. That’s crazy,” said CEP President David Coles at a demonstration against Keystone XL last year. “Our members live and work there. They gotta breathe the air. They gotta be there after the stuff is pumped out of the ground.”

In British Columbia, fear of tanker and pipeline spills dominates the conversation. “Harper: Our Coast is Not for Sale,” said many signs in Victoria. Protesters unfurled an 800-foot black banner to show the staggering scale of the tankers expected to ship the bitumen from Kitimat.

"The ongoing risks that these tar sands pipelines and tankers pose aren't worth any price,” said Susan Spratt, director of the area’s Canadian Auto Workers. She said spills could destroy tens of thousands of jobs that depend on river and ocean ecosystems.

Pipeline spills are not uncommon for Enbridge, which took scathing criticism for its handling of a 2010 spill of a million gallons of tar sands slurry into Michigan rivers. A recent regulator’s report found that Enbridge didn’t discover the leak for 17 hours, and then only because the public complained. The chair of the National Transportation Safety Board said Enbridge managers’ actions during the disaster made her think of the Keystone Kops.

The coast of British Columbia is the traditional land of many First Nations. They have been battling the idea of the Northern Gateway for seven years and showed up in force at the demonstration Monday.

"More than 50 [British Columbia] communities have said 'no' to these tar sands export pipelines," said Barry O'Neill, president of the public employees union CUPE in British Columbia. "That's along with 132 First Nations, and thousands of working people right across Canada who say no."

Along with the Auto Workers, CEP, and CUPE, unions of teachers and fishermen have strongly condemned the Enbridge pipeline.

In the U.S., unions split bitterly over the Keystone XL pipeline, with jobs at the center of the debate. Some construction unions have endured up to 25 percent unemployment since the housing crash in 2008.

Hoping to see construction work, the Laborers and other construction unions have made common cause with Keystone XL developer TransCanada—and the famously anti-union oil billionaires Charles and David Koch—to lobby for approval.

Meanwhile the two largest transit unions, the Amalgamated Transit Union (ATU) and the Transport Workers (TWU), oppose Keystone XL, calling for a green New Deal, including funds for mass transit, instead of further exploitation of fuels that intensify global warming. ATU represents 190,000 bus and train workers in the U.S. and Canada; TWU represents 130,000.

Alarm about climate change inspires the main opposition to both tar sands pipelines. The pipelines would accelerate extraction of tar sands bitumen, which has a much larger carbon footprint, relative to the energy it provides, than normal crude oil.

“If the tar sands are thrown into the mix it is essentially game over,” he wrote. Hansen was among 1,200 anti-Keystone XL protesters arrested at the White House a year ago.

U.S. transport workers’ unions also worry that corporate investment in these pipelines risks locking in tar sands development for decades to come, to the exclusion of less dangerous energy options.

Expanding tar sands production will “impede our country’s and the world’s efforts to transition to a green and more sustainable economy,” said the ATU and TWU in a joint statement urging Obama to reject the permit. (Pipelines that cross a border into the U.S. require federal government approval.)

The protests have stopped U.S. approval of Keystone XL, for now. However, TransCanada has started building a portion of the pipeline that is entirely in the U.S., betting on later approval of the northern stretch.

Jenny Brown was a co-editor of Labor Notes.jenny@labornotes.org
Related
After Strike, Washington Carpenters Approve New Contract by Slim Margin »
After Voting Down Four Tentative Agreements, Washington Carpenters Strike »
The Australian Green Bans: When Construction Workers Went on Strike for the Environment »
Another Walkout, Car Blockade: This Week in the Battle to Save the Oshawa Assembly Plant »
Viewpoint: General Motors Doesn't Deserve Our Loyalty »