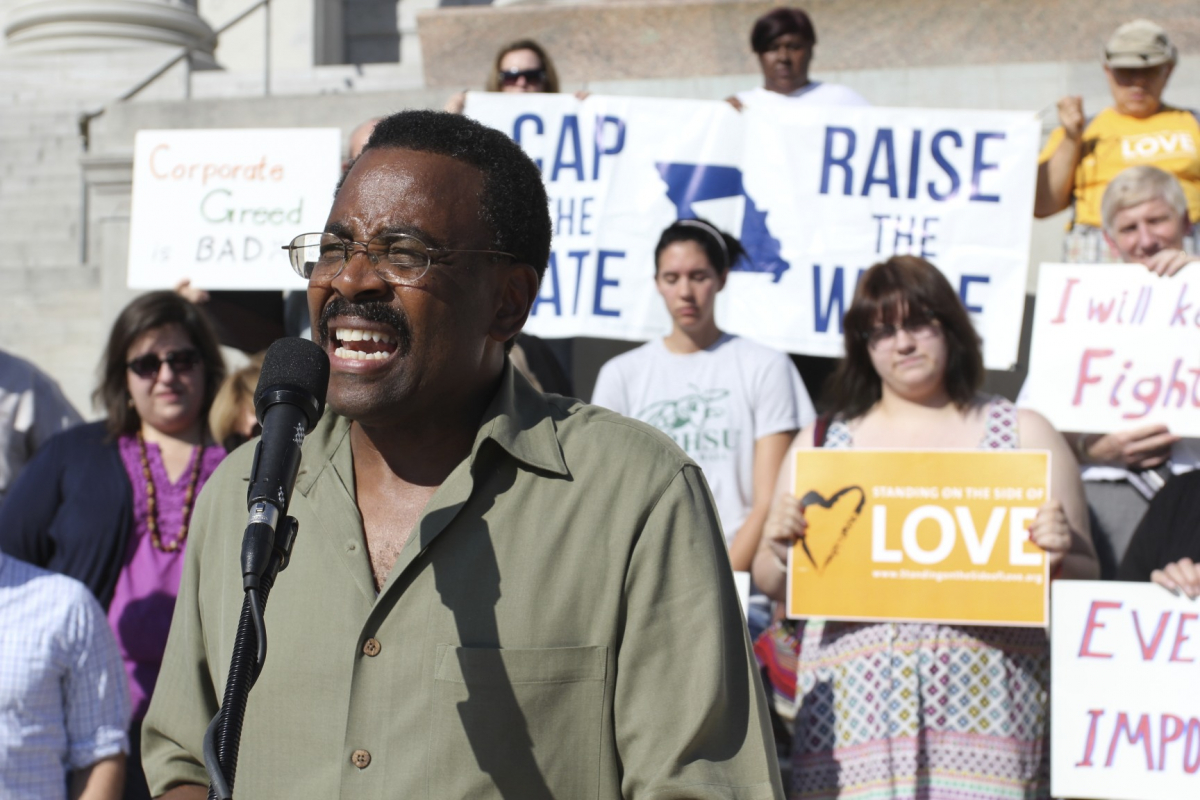 W.T. Edmonson, president of Jefferson City Congregations United, speaks at a “We Will Not Be Silenced” rally in Missouri's capital. A cynical corporate legal gambit forced two anti-poverty measures off this year’s ballot. Photo: Fired Up Missouri.

At a rally to raise the minimum wage in Kansas City, Missouri, Ibn Frazer, a young African American, told the crowd that for the last six years, he’s awakened every day and gone to work twice.

Since he was 16, Frazer said, “I’ve juggled two minimum wage jobs at places like Panera, Applebee’s, gas stations, and Comfort Inn.” Like nearly all his co-workers, he “either can’t get enough hours or the hours we get don’t add up to making a living.”

He now works at Pizza Hut 45 hours a week and at Burlington Coat Factory another 30. He works seven days a week. “Five days I work two jobs,” Frazer said, “and I haven’t had a day off in nearly two months. I feel like I’m wasting my life.”

Four years ago, after Elliot Clark’s wife broke her ankle and couldn’t work, he turned to a payday loan. “Eventually one payday loan turned into another and then another,” he says. In a short time, he had five loans totaling $2,500—and wound up paying $30,000 in interest over three years. Clark lost his home to foreclosure while paying off the loans.

Frazer and Clark have something in common: they are workers whose low wages are neither enough to pay the bills nor enough to qualify them for reasonable credit. The minimum wages paid by billion-dollar corporations like Bain, which owns Burlington Coat Factory, or Yum Brands, which owns Pizza Hut, push them into the jaws of predatory lenders granting “payday loans.”

These are small, short-term loans often used by families living paycheck to paycheck to plug an emergency hole in the budget like a car repair or a child’s medical bill. Missouri allows their interest rates to rise as high as 1,950 percent per year.

A year ago, the labor-community coalition Missouri Jobs with Justice got together with two faith-based grassroots organizations in Kansas City and St. Louis, composed of dozens of congregations. They bridged the urban/rural divide by bringing in three more organizations, including smaller town congregations, family farmers, and low-income people (the direct action group Grassroots Organizing).

Together they decided to make common cause against low-wage employers, headed by the Missouri Restaurant Association and the payday loan industry, and place two initiatives on this fall’s ballot.

One would raise the state’s minimum wage from $7.25 to $8.25 and the hourly rate for tipped employees from 50 to 60 percent of the Missouri minimum. The other would cap payday lending interest at 36 percent per year. Polling told them both initiatives would pass easily.

Jobs with Justice had raised the minimum wage before, by $1.35. In 2006 a coalition of economic justice organizations including the Service Employees and other unions had easily passed an initiative.

That campaign was led by labor but had support from many progressive churches as well. At the same time, the faith-based groups had been working in vain for years to get the legislature to regulate the payday lending industry. Many were grounded in their traditions’ strong teaching around the sin of usury—and also in the experience of having to bail families in their congregations out of these loans time after time.

For some unions in Jobs with Justice, the alliance was a stretch. Some wondered why they needed the faith groups, when raising the minimum wage was polling so well on its own.

Some feared taking on the payday lending industry, the second highest spender in the legislature. To block a slew of anti-labor bills, Missouri labor had been following a defensive strategy of lobbying moderate Republicans.

But some leaders of unions and the state and local AFL-CIO became convinced that going on offense with demands that benefit low-wage workers could make a long-term change in the political and organizing climate. Missouri leaders see the full frontal attack on collective bargaining in other Midwestern states. They know that to fend it off here we will need not just unions but also working people organized in their neighborhoods, at their congregations, and on campuses.

The idea was to organize among the vast majority who are not union members, for gains that would affect everyone. Thus Missouri became one of the only states this year where working people and their allies went on offense to demand a transfer of wealth from the 1 percent to the 99 percent.

By working together and carrying one another’s petitions, each group expanded its reach. Faith volunteers, students, and union members all learned on street corners that voters understood the issues better together.

The petition to cap the interest rate was a great hook to start a conversation. The average rate of 445 percent got folks’ attention and usually their signature, creating the opportunity to say, “You know, low-wage workers wouldn’t have to use these loans if they earned more.” That usually overcame an all-too-common belief that raising the minimum wage would cost jobs.

Rev. David Gerth of St. Louis’s Metropolitan Congregations United said, “Our members were invigorated by going out into the streets with labor and student petitioners from Jobs with Justice. Had we known this, we would have done it sooner.”

Each initiative needed about 95,000 signatures. From March through August coalition members threw all their staff—about 42 full-time equivalents—into training and signature gathering. They recruited 1,300 volunteers.

Lara Granich, executive director of Missouri JwJ, said volunteers fanned across the state, learning to make the pitch in districts represented by Republicans. In the end, they turned in 350,000 signatures on the two petitions combined.

Payday lending has grown rapidly since state legislatures began permitting it in the early 1990s. By 2009 there were 22,000 payday shops in the 35 states that permit them, with Missouri in the top five in density. Payday lenders in Missouri outnumber McDonald’s, Starbucks, and Walmarts combined.

The wealthy payday lenders led the dirty tricks and opposition to the initiative, along with the Missouri Restaurant Association. Granich estimates that they spent at least $5 million.

Advance America, the nation’s largest installment loan company (installment loans are a longer-term payday loan), tried to fracture the alliance by a combination of threats and incentives to pastors and elected officials in poor, often African American communities. A law firm threatened churches with criminal penalties and loss of their tax-exempt status. A barrage of court challenges lost at the state Supreme Court.

The lenders ran TV ads warning that bringing the interest rate down would bankrupt them and leave poor neighborhoods with no credit. They sent thugs who threatened petitioners and offered them bribes to go home.

Ten days before the signature deadline, 5,000 signatures were stolen from a staffer’s car. The next day dozens of grassroots leaders from all over Missouri swept into the Ozark region and gathered 7,000 signatures in a five-day marathon.

Anti-initiative forces knew they would lose if the petitions were qualified for the ballot, so they found a loophole in the poorly written initiative law. Ten days before the September 21 deadline, their lawyers filed multiple motions that could force Missouri’s 116 local election boards to produce the voter registration cards for each signature. Faced with too few court days before the ballot-printing deadline, the coalition was forced to withdraw. It was a kick in the gut.

This new form of voter suppression, which threatens to remove the only remaining means for working people to affect legislation, caused tremendous outrage. Todd Appleby, a Communications Workers officer, said, “This is a radicalizing moment for my members. They are learning just what corporations are capable of doing.”

Even the press was fuming. The St. Louis Post-Dispatch announced that “robbery with a pen will continue to be legal in Missouri.”

Missouri labor suspects it will face a right-to-work initiative in 2014. Now, with allies, it is in a much better position to fight. Granich said, “We know that in the long run, the kind of alignment progressive forces are building is what it will take to disrupt corporate power.”

Judy Ancel is a labor educator at the University of Missouri-Kansas City and a leader in Kansas City Jobs with Justice.