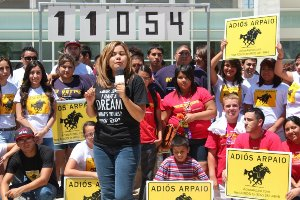 Latino workers in the Phoenix area are fighting back against the bullying sheriff of Maricopa County, Joe Arpaio. They’ve registered over 34,000 new voters for the November election.

The “Adiós Arpaio” campaign is part of a strategy by the hotel union UNITE HERE to turn around Arizona’s anti-worker policies, in a right-to-work state where Latino workers have only recently begun to flex their political muscles. Maricopa County contains 60 percent of Arizona’s population.

Organizers say they feel a seismic shift in the political landscape. “I’ve never been part of something historic before,” said Lucia Vergara Aguirre, president of UNITE HERE Local 631. The union has been growing, representing workers at the Phoenix airport complex and at several downtown hotels, and has other organizing drives underway.

The campaign could have national importance in drawing the line against politicians who use anti-immigrant rhetoric to gain office. UNITE HERE members have been taking time off to work on the voter registration campaign. Fifty volunteers from the Los Angeles County Federation of Labor, along with labor activists from Texas and New Mexico, traveled to Phoenix to bolster the effort.

But a phalanx of Phoenix high school students has formed the backbone of the campaign. They’ve been coming into the union office after school and working four shifts a day on weekends, heading out to register people in grocery stores and on doorsteps, making inroads in a Latino community that has not traditionally registered to vote in high proportions.

“All these students committed because they have the same issue inside, that they can’t stand discrimination against Latinos,” said Carmen Robles, a Tempe High School student who, at 15, leads one of a dozen student voter registration teams. Hers is jokingly called the T Party, for Tempe.

In October, students led a march to Arpaio’s office, bringing moving boxes to suggest he should get busy packing up. The action was courageous because some students have had direct experience with the Maricopa County sheriff’s office. “One of my friends got her dad taken away,” said Robles, who said her mother is undocumented.

“Some people want to join us but still have that fear, that Arpaio is going to mess with us,” she said. “Our determination is bigger than Arpaio.”

Robles easily made the connection between worker rights and the immigration crackdown, explaining that her mother’s job options are limited because of her status—she works at a car wash where she is paid for only a portion of the time she’s at work.

“Sheriff Joe” made a name for himself by confining prisoners in tents in the desert heat, cutting them back to two meals a day, and declaring himself “America’s Toughest Sheriff.”

But Arpaio’s star may be fading. He has been the target of many investigations, including one where the U.S. Justice Department concluded his office had “a pervasive culture of discriminatory bias against Latinos” directed from the highest levels of the agency.

Always a self-promoter, Arpaio surfaced on the national radar as America’s most anti-immigrant sheriff in 2007, riding a wave of prejudice that crested with Arizona’s hated SB 1070. Signed into law by Republican Governor Jan Brewer in 2010, SB 1070 transforms local police and sheriffs into immigration officers and virtually guarantees racial profiling.

Vergara Aguirre said her members are afraid they’ll be detained simply because they fit the profile of Mexicans or because their English is accented. Some are even afraid to leave work to go home. The visibility of the movement against Arpaio is reducing that fear, she said.

Still, “the level of fear is extraordinary,” said Daria Ovide of the Campaign for Arizona’s Future, a union-funded political action committee working against Arpaio. “You can be detained even if you’re documented because you’re assumed to be undocumented.” And detention means confinement in one of Arpaio’s tents, in all weather.

Arpaio’s constitutional violations were so blatant that in 2011 the federal Department of Homeland Security stripped the sheriff’s office of its authority to identify and detain people simply because they have no papers. It’s unclear that Arpaio’s agency has changed much, though.

LEARNING ABOUT THE UNION

Some unions have stayed out of the Adiós Arpaio campaign, though the Food and Commercial Workers are on board. “Immigration is still a very divisive issue among unions,” said Ovide.

She thinks that’s wrongheaded, since Latinos of any economic status vote better on working people’s issues than even union members who are white do. So it benefits workers of all races to increase Latino voter turnout, she said.

Meanwhile, the high school student volunteers are learning about the union. Vergara Aguirre has found herself explaining to fascinated 17-year-olds how the union works, how she got involved, and what a union contract is. They talk to her about the humiliating, low-paid jobs their parents have, and ask if a union could change that.

“These kids are going to be part of our union,” she predicted.

The sheriff’s race is likely to be close. Anti-Arpaio voters outnumber supporters in the polls, but it’s a three-way race, with a Libertarian candidate in distant third place drawing some votes away from the Democratic challenger.

Arpaio has a formidable campaign budget, since he garners donations from all over the country for his inflammatory actions—he even launched an investigation of President Obama’s birth certificate. And he has support from Phoenix’s suburbs, a largely retired, largely white population.

Vergara Aguirre sees the effort as a long-term strategy. Increased Latino voter turnout can help the union secure better conditions at the city-owned airport, by electing more sympathetic city council members. Looking to the future, Arizona campaigners hope to emulate the mobilization in California that changed the state's political climate in reaction to the 1994 anti-immigrant Proposition 187.

“If we take Arpaio out of office, that will be a celebration for everyone,” she said, “but if not, next time.

“The next one will be Jan Brewer,” Vergara Aguirre added. “That lady has to go, too.”