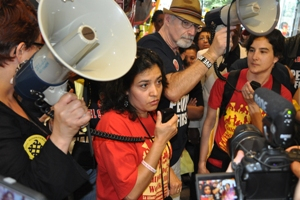 Low-wage workers in California who had been organizing for expanded rights were stunned September 30 when Governor Jerry Brown vetoed pro-worker bills, citing the burden the protections would place on employers.

Meeting a week later, more than 100 rank-and-file workers and grassroots organizers from 15 worker centers and social justice organizations vowed at a regional meeting of the Excluded Workers Congress to learn as much from their losses as from their victories.

The vetoed bills would have aided domestic workers, immigrants, and farm workers.

Members of the National Domestic Workers Alliance were angry to lose a bill that would have ended the exclusion of domestic workers from basic labor protections. It would have extended overtime pay and meal and rest breaks to childcare providers, housecleaners, and caregivers.

For the largely Latina and Filipina domestic workers, the reasons for the setback were not much different from those 74 years ago when Southern lawmakers succeeded in having their African-American domestic help, as well as farm workers, excluded from the National Labor Relations Act. “Governor Brown decided to side with the Chamber of Commerce,” said NDWA organizer Jill Shenker.

Brown has taken pains to present himself as a governor who balances the interests of all—including business. He pushed through cuts to public employee pensions and has shed his reputation from his first term (1975-83) as a solid supporter of the United Farm Workers.

The domestic workers had built an impressive coalition of unions, students, and religious groups, as well as the disabled and elderly who use their services. Hundreds of workers and allies had mobilized to Sacramento to march, rally, and meet with legislators.

Even AFL-CIO President Richard Trumka came to Sacramento to personally meet with legislators. “It was unprecedented for an AFL-CIO president to come to California to lobby for a state bill,” Shenker said.

The domestic workers had felt they were on a roll. Two years ago the Alliance won a bill of rights in New York state, securing protection from discrimination, time-and-a-half for overtime, a day off each week, and three guaranteed days paid leave per year. In 2011, they helped win an international standard from the UN’s International Labor Organization. Plans are afoot to win labor rights for domestic workers in other states.

Members of the National Day Laborers Organizing Network (NDLON) were stung by the Democratic governor’s veto of the Trust Act, which would have prohibited local law enforcement agencies from detaining people for deportation unless they had been charged with a violent or serious crime.

The Obama administration’s Secure Communities program requests that local police detain suspects for possible deportation even when they have been stopped for minor offenses such as traffic violations.

The Los Angeles Police Department is now challenging whether the requests are mandatory and is refusing to detain immigrants for nonviolent offenses.

NDLON has been fighting scapegoating and criminalization of immigrants, such as the anti-immigrant laws that passed in Arizona and spread to Georgia and Alabama. The network won legal recognition of day laborers’ right to seek work in public areas in a precedent-setting case in federal court in 2011, invalidating an anti-day labor ordinance that had spread to several towns in California.

Brown also vetoed a bill backed by the Farm Workers that would have made it a misdemeanor, punishable by jail time and fines, for growers not to provide water or shade during extreme heat.

At its Southern California regional meeting October 6, the Excluded Workers Congress repurposed itself with a new name and more assertive attitude, saying the slogan of the new United Workers Congress will be “from exclusion to power.”

“We want to emphasize the broader goal of connecting all workers and not focus on being marginalized,” said Daniel Castellanos, lead organizer of the National Guestworker Alliance. “The United Workers Congress brings together sectors of workers who were told they couldn’t organize but who went out and did it anyway.”

The Excluded Workers Congress was formed at the 2010 U.S. Social Forum in Detroit. It includes organizations representing nine sectors of workers who either by law or by practice are excluded from legal protection of their working conditions or the right to organize.

For example, the Formerly Incarcerated and Convicted Peoples Movement promotes local ordinances that “set guidelines for how and when employers or landlords can consider conviction records,” said organizer Linda Evans.

Seven states and 42 cities and counties have passed such ordinances.

The National Guestworker Alliance organizes workers brought in from abroad under federal subcontracting programs. Its most recent victory came from this summer’s strike at CJ Seafood in Louisiana, a shrimp supplier to Walmart, which got Walmart to suspend its contract. The Department of Labor fined CJ nearly $250,000 in back wages and fines for serious violations.

The Alliance aims to link members with workers further up the supply chain, said organizer Jacob Horwitz. They have connected with the warehouse and retail workers who also struck Walmart in September and October (see this page).

There, non-union workers employed by contractors—often considered unorganizable—worked with worker centers to figure out how to strike—and got their jobs back.

“We can tell workers ‘you are not alone,’” Castellanos said. “‘You are with other workers all along the supply chain to create our own power.’”

Community Voices Heard is organizing among the thousands of workfare workers in New York City who pick up trash in streets and parks or clean city offices in exchange for their monthly grant and food stamps. They are required to wear tags that say “non-employee”—though they often do the same jobs as union employees who receive a living wage and a paycheck.

Community Voices Heard, and in San Francisco the Living Wage Coalition, are seeking genuine training, real paychecks, and a path to living wage jobs. “We have to develop new models of organizing workers whose employers won’t even recognize them as workers,” said Julie Wickware, a Voices leader.

At the October 6 meeting in Los Angeles, Castellanos said new groups of workers came to learn about the United Workers Congress for the first time: nail salon, car wash, warehouse, and garment workers, and non-union janitors.

Despite the big setback of Brown’s vetoes, participants were excited to learn about campaigns that have been successful for workers long pushed down. Domestic workers plan to introduce new bill of rights legislation in Illinois and Massachusetts.

Karl Kramer is an organizer with the San Francisco Living Wage Coalition. For more see unitedworkerscongress.org

A version of this article appeared in Labor Notes #404, November 2012. Don't miss an issue, subscribe today.
Related
‘A Loud, Magical Movement’: Strippers Fight for a Union »
Spring of Discontent: Mexican Berry Pickers Strike for a Bigger Share of Profits »
Viewpoint: Abolish the H-2A Program! »
Trouble in the Tulips: Organized Farmworkers Win Basic Demands in a Quick Strike »
We Can't Just Keep Saying 'Pass the PRO Act.' We Have to Organize. »