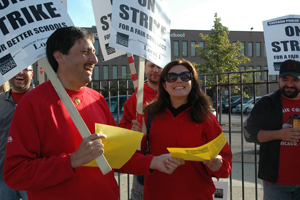 Striking Chicago teachers will remain out of the classroom until Wednesday at least, as union members debate their tentative contract. The agreement makes gains on key issues while accepting concessions on health care and job security. Photo: CTU.

Striking Chicago teachers will remain out of the classroom until Wednesday at least, after delegates decided to give union members time to debate the tentative contract negotiators brought to them on Sunday.

Delegates said that all members of the union—not just elected representatives—should get a chance to review and weigh in on the proposed agreement before a decision was made to go back to work.

The agreement makes significant gains on many key issues for the union, including how teachers are evaluated, while accepting concessions in health care and job security. Still left to be determined is how the city will find the funds needed to overhaul crumbling schools and pay for the libraries, health, and social services that the union demands for schoolchildren.

The school board has been trying for the past week to isolate the union negotiating team from the Chicago Teachers Union’s broader membership, going so far as to tell the press that a settlement was sure to be in place by the beginning of this week, long before delegates, let alone rank-and-file members, had even seen contract summaries.

But CTU’s leadership refused to push the tentative agreement on members without letting them decide for themselves whether it was acceptable. “I’m not going to say this is the greatest thing since sliced bread and try to sell it to them. I’m not a marketer,” said union President Karen Lewis. “Our people know how to read, they know how to do math, and they understand these things.”

According to Vice President Jesse Sharkey, “the board forgot to do one thing: bring along the people who actually do the work.”

Delegates agreed. High school history teacher Jen Johnson, a member of the team coordinating strike logistics, said even though delegates could have decided on ending the strike themselves, they didn’t think it was fair to make such a “momentous decision” without broader member input.

“It’s not just a contract vote,” she said. “We’re on strike and it’s a different context. People felt very strongly about having a little time with their members.”

At Hibberd Elementary, picket line chants were replaced with murmurs and questions this morning as teachers huddled in groups of three and four to peer over contract summaries circulating through the crowd.

“Morale is much higher today than it was last week because now we have a framework and something tangible in our hands,” said kindergarten teacher Emily Gann.

After the morning picket, Hibberd teachers filed into a nearby church for a report from delegates on yesterday’s meeting and a discussion of members’ opinions on the tentative agreement.

Union delegates held similar meetings with their members today across the city.

Delegates will meet again Tuesday night to vote on the tentative agreement.

The tentative agreement contains some bright spots. Not only was the union able to stave off merit pay, but it maintained raises based on education and experience that Mayor Rahm Emanuel (and corporate education interests nationwide) have vowed to end.

Student test scores will now comprise up to 30 percent of a teacher’s evaluation, the minimum allowed by state law. Mid-year evaluations, which principals often use to oust teachers, have been disallowed.

The union also gained ground on recall rights, a key concern for teachers as the city is poised to close some 200 schools. Laid-off teachers would have full recall rights if their old jobs are reinstated within 10 months. At least half of all positions that open up must now be filled with a laid-off teacher.

At the same time, the agreement is by no means perfect. Keeping teacher health care contributions low required the union to sign off on an unpopular “wellness program” that uses carrot-and-stick incentives to force members to participate in diet, nutrition, and disease monitoring.

The evaluation system will include a “needs improvement” category that makes it easier for teachers to be let go.

And not much progress was made on an issue considered vital to the union’s community supporters, reducing class size. School officials had attempted to gut the contract language that governed class size, which CTU fought off. But the language as it stands has proved insufficient and difficult to enforce. Current policy requires the district to take action when class size exceeds 35, but teachers have reported kindergarten classes over 40 and high school classes over 50.

Perhaps most worrisome to teachers anticipating school closures, though, is the fact that laid-off teachers would now receive only six months of severance pay as opposed to a year, the current practice.

While she’s encouraged by the progress that’s been made, Johnson says she’s still “very concerned about teacher evaluations, the length of the displacement pool, and the lack of movement on wraparound services.”

The board agreed to increase those services by hiring more social workers, psychologists, counselors, and nurses, but only if new revenue became available. The union has campaigned to redirect millions of dollars in tax breaks handed to downtown business interests to schools.

Johnson hopes that by staying out longer, more progress can be made on these key issues. “This is a game of chess and it’s the board’s move. We’ve shown our strength.”

Emanuel tried to make his next move today by filing for an injunction against the union, claiming members were striking over illegal non-economic issues like class size and recall rights.

The union, though, has announced legal reasons for the strike since the beginning. When the strike was announced last Sunday, union leaders gave evaluation procedures and policies as their major reason for going out.

In deciding to continue the strike, delegates said only that they wanted to give members the chance to review the agreement.

The injunction request also says CTU is putting the city’s children in danger by closing down schools and leaving them nowhere to go.

The Chicago Sun-Times rebutted the idea that children were in grave danger, reporting that homicides in the first four days of the strike were even down from the same dates last year.

Cook County Judge Peter Flynn seemed to agree this morning. He moved to delay a hearing on the board’s request for an injunction until Wednesday, saying he wanted to speak with the union first.

To change the terms of the deal, the union’s membership would have to reject the tentative agreement and send negotiators back to the table.

Gann, for one, is happy with the deal as is.

“There are a lot of things in the contract we didn’t think we were going to get,” she said. “No one thought we’d get them down to 30 percent” on evaluations.

Nonetheless, she’s glad members get the chance to do a close reading.

“We want to make sure things are set up to benefit students and get the educational system more towards the way we want it to be,” she said. “If it’s not, we’ll just keep fighting.”