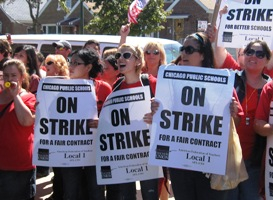 Teachers at Chicago's Peck Elementary say they struck to improve learning conditions. Despite high-level vilification in the media, parents are backing the action. Photo: Howard Ryan.

At a time when public school teachers are vilified by higher-ups and in the media, what moved Chicago teachers to launch their first strike in 25 years?

They are finding overwhelming support where it counts, from parents and the community. A poll released yesterday said 47 percent of Chicago voters support the strike, and 39 percent oppose it.

But how did the teachers work up the will to walk out?

Teachers walking picket lines for the third day tell their side of the story.

Building the Union at Lane Tech

Lane is a selective-enrollment school with 4,400 students and is one of Chicago’s most prestigious public schools. Its teachers have long been in a “comfort zone,” as one teacher put it, and were complacent about the union.

Bertenshaw exemplifies that trend. A self-described conservative, he didn’t join the union until about a year ago, preferring instead to pay the union a service fee. Dozens of his fellow teachers were fee-payers as well.

Yet the picket line at Lane looked plenty spirited, with a couple hundred red-shirted teachers supported by students and parents. What brought about the change?

Emanuel’s aggressive posture toward teachers made an impact. But equally important was the 2010 election of a new Chicago Teachers Union leadership led by the Caucus of Rank and File Educators. CORE’s strong organizing orientation inspired CTU activists at Lane to launch a concerted union-building effort at their school.

After a big kick-off meeting, activists showed a screening of a teacher-produced documentary that responded to the anti-teachers union movie “Waiting for Superman,” said Cynthia Smith, a special education teacher and the lead union delegate (steward) at Lane.

More than 120 people attended the screening, and by the end, people were “literally on their feet, angry,” says Smith. “They were so incensed with the lack of fairness from the media, and the mistreatment not only of teachers but of public school children.”

At another Lane event, Smith and colleague Steve Parsons gave a presentation on Eli Broad, the billionaire whose leadership institute trains business people to run school districts with a privatization agenda. Among the Broad graduates is Jean-Claude Brizard, whom Emanuel appointed CEO of Chicago Public Schools.

The workshops and meetings were combined with lots of one-to-one conversations, which “started the fuel and fire, helped teachers understand how it’s a larger picture than just Lane Tech,” Smith said.

In the process, the fee-payers signed on as union members and the Lane teachers became a more cohesive unit prepared for unified action.

Pushing Out the Best

Chicago teachers widely believe that the mayor and his appointed school board are bent on pushing out teachers who have more experience and have climbed the salary ladder.

“They come out of nowhere and say, ‘You guys are the problem,’ said Bertenshaw, who has taught English for 21 years. “‘Your kids are stupid because you’re not doing your job. You guys are wasting money. We need to get rid of you.’”

The yearly ritual of school closures and “turnarounds” expedites the process, with teachers fired en masse to clear the way for privately operated charter schools. More than 100 Chicago schools have been closed in the last decade, and now, 119 charter schools operate in the city. Only 10 are unionized.

Bertenshaw describes a quieter push-out method. “Administrators come into your classroom with their checklists. We jokingly call it observational harassment—like sexual harassment. But it’s not to make the schools better; it’s to find something that we’re doing wrong. Do we have our standards posted on the wall? Do we have a seating chart? Have we turned in our lessons in the proper format?”

The ‘gotcha’ approach angers teachers, who “work their brains out,” insisted Bertenshaw.

“We have special ed teachers who pick up kids that are bigger than they are and clean them,” he said. “Teachers who come to school at 6 a.m. or stay after school to coach track or debate team. We have a teacher who takes students to England in the summer. I look around and I see people who are very well educated, who treat kids spectacularly well and help them become good citizens.”

Teacher support for the strike is equally strong at Peck Elementary School, near the Midway Airport in southwest Chicago, but with concerns that are more typical in the city’s low-income communities of color.

Peck crowds 1,600 students into a school designed for 400. Its students are 90 percent Latino, with 97 percent poor enough to qualify for free lunches.

The school’s associate union delegate, eighth-grade language arts teacher Kathe Myers, points to the impacts of overcrowding. The school has only one counselor (it should have three, based on federally recommended ratios), and the counselor is often assigned non-counseling duties. There is no library, no playground, no cafeteria. “Weather permitting, the students play football, baseball, or soccer in the parking lot,” says Myers, “where they have lots of injuries.”

She continues: “Every nook and cranny is filled with teachers doing something like special ed, or pulling out students for hearing and vision screenings, working in bathrooms or whatever they can find in the way of space. Our social worker has a tiny room in the back of the auditorium that’s dirty and hot but it’s a private space.”

Lead delegate and fifth-grade teacher Kamau Hester says Peck has suffered poor physical facilities for years—air conditioning that didn’t work, lighting systems that popped off and on during the school day. Only now are some improvements being made.

Hester also cites a “revolving door” of administrators, each coming in with their own program. The programs “start and stop, start and stop,” leaving confusion and underserved students in their wake.

Last year, he says, an area administrator introduced a new test for grades 3 to 8 that had to be given six times a year, piling more on top of the several other standardized tests that the district or state have mandated, Hester said, decrying how many days all the testing takes away from instructional time.

The administration wouldn’t listen to teachers’ concerns, Hester said, and “teachers who spoke out initially against this test were targeted by the administrator.” The test was finally scrapped after teachers reached out to community allies, who applied pressure on the school district.

Myers says she’s supporting the strike because “I believe that every child in this city deserves everything that Rahm Emanuel’s kids get at the Lab School,” an elite private school at the University of Chicago. “Arts, music, recess, outdoor play spaces, cafeterias—these are basic things that every child deserves.”

Just as at Lane, the new CTU leadership played an important role in inspiring Peck teachers to unify and get involved in the union. Says Myers: “The leadership are people who come from schools that have been turned over or turned around, so a few of them have been displaced themselves. They’ve been doing lots of research, they know the history of unionism and activism, they are organizers and activists, and they don’t make any major decisions on their own. It’s all through us.”

A Chicago writer and organizer, Howard Ryan is writing a book on organizing for teachers.

A version of this article appeared in Labor Notes #402, September 2012. Don't miss an issue, subscribe today.
Related
2022 in Review: Harsh Conditions, Good Surprises »
Viewpoints: How Academic Workers’ Leverage Can Grow in a Long-Haul Strike »
Every Union Contract Right Now Should Be the Best Ever »
Could We See a Rail Strike? »
Undaunted by Fines, Massachusetts Teachers Defy Strike Ban »

The teachers union was for students and schools before they were for themselves.

Increase of pay.
Job protection.
Shorter work hours.
No evaluation on performance.
Less personal money to be spent on our insurance.
Give laid off teachers same full pay for being a substitute or teachers aid.
Pay laid off under preforming teachers full pay while looking for another career.

Yeap, students and better schools are in the cross-hairs for this union.

Yeap, students and better schools are in the cross-hairs for this union.

The teachers union was for the teachers and the schools before they were for themselves.