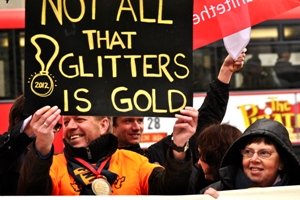 Locked-out workers from Quebec protested in London, asking Olympics officials to drop their employer as a supplier of metals for the games’ medals. Photo: Sean Comisky, EOR Photography.

Just before Olympic athletes began climbing London podiums to receive their medals, Canadian smelter workers settled a dispute with the multinational that provides the gold, silver, and bronze.

Steelworkers at the Rio Tinto aluminum smelter in rural Quebec ratified a contract last month, ending a six-month lockout that threatened to overwhelm the union with subcontractors.

After refusing talks for months, the company came back to the table to improve its offer to the 780 USW members just weeks before the Olympics. The Steelworkers had sent members around the globe whipping up support for its “Off the Podium” campaign that asked the International Olympic Committee to drop Rio Tinto as a supplier for the metals used in the competition’s medals. Sixty unions and international labor federations across 37 countries had signed on.

The global mining corporation also faced a confrontation last month with Canadian Auto Workers (CAW) members at its Kitimat aluminum smelter in British Columbia. The threat of a strike or lockout there may have speeded the Quebec settlement, as the company moved to ensure it could maintain production. The CAW, however, ratified a contract in late July as well.

Quebec provincial law bars scabs from taking the place of union workers in a dispute, and production there had fallen to one-third of its normal level as 200 supervisors raced to keep the smelter hot.

Rio Tinto had demanded to replace union workers with subcontractors at a pace that would decimate the union in the small town of Alma, about 500 kilometers north of Montreal. Steelworkers officials said the company was demanding to ax anywhere from a quarter to half the jobs and hand them to contractors.

Member Robert Gagnon said the settlement conceded 56 repair and maintenance jobs but limited further contracting out to 10 percent of the hours all members work. Rio Tinto must produce work-hours records regularly, and if they exceed that level the company must return even more work to union members.

“They know that we’re going to follow it very carefully,” Gagnon said.

The settlement showed the difficulty of effective action against a multinational employer that enjoys local government backing.

Public money subsidized the Rio Tinto lockout. When the company shut its union workers out, it invoked a secret clause in a contract with the Quebec government that obligated the public to buy hydroelectric power from Rio Tinto’s dams, bringing it a monthly income of $14.5 million.

The balance of forces was unequal because of this secret agenda, said Daniel Mallette of the Steelworkers’ Canadian district.

Locked-out members mobilized against the union-busting arrangement, collecting thousands of signatures and leading a march 212 kilometers to deliver the petition to the Quebec National Assembly. But the conservative majority told the union the Rio Tinto contract was sacred and couldn’t be touched.

The situation was no easier at the job site. Gagnon said members massed to block every entrance to the facility on the first day of the lockout, only to find that within an hour the company had secured three helicopters to fly managers over their heads and into work.

Then Rio Tinto woke up a judge in the middle of the night, he said, and within four hours had an injunction declaring that union pickets must stay 1,500 meters away from the gates.

It would take four-and-a-half months for the union’s protest against the injunction to receive a court hearing.

The union fought on, mustering a march of 8,000 people in Alma, a town of 30,000. When a company executive predicted the “wife influence factor” would force union members back to work, 200 wives picketed.

Gagnon said the union has been coordinating with the CAW as its members faced similar demands, and will maintain its mobilization structure. He expects Rio Tinto to come back for more in 2015, when the contract expires. Defined-benefit pensions, he predicts, will be the next target.

Mallette said the union is focusing on political action to ensure its members and communities are prepared for a snap election this summer, called by a conservative government trying to sneak through with low voter turnout.

With hundreds of thousands of students recently in the streets of Montreal demanding that higher education be freely available, and union families angry that the government didn’t lift a finger in their defense, Mallette says the public is ready for a shift in direction.

Related
Hotels Don't Waste a Crisis »
Employers Are Using the Crisis to Push Concessions They Don't Need »
Striking ATI Steelworkers Hold the Line for Premium-Free Health Insurance »
Gearing Up for Bargaining, Canadian Union Pushes for a Greener, Better Postal Service »
Steward's Corner: What Your Boss Doesn't Want You to Know, and Where to Find It »