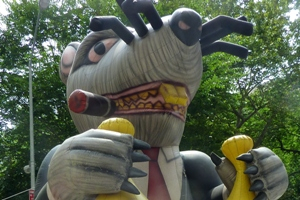 Union publicity and protests that are not "coercive" to a secondary company are legal, including handbilling, banners, and yes, giant rats. Photo: Corey Doctorow.

In any struggle against an employer, especially a contract campaign or a strike, it makes sense to consider whether the union can use pressure tactics against entities that do business with the employer or that are in a position to influence it.

“We regularly use all of these techniques, although we prefer the inflatable bulldog to the rat,” he said.

Do these tactics work? “Yes, especially in dense urban areas with high visibility,” Erlich said. “It can lead to quick and productive discussions.”

What pitfalls should unions be aware of?

“The only problem with secondary activities is when they get mixed up with picketing,” Erlich said. “That can lead to nasty litigation and potential damages.”

It may come as a surprise to some unionists, but the National Labor Relations Act does not prohibit boycott campaigns against neutral or secondary companies. Although the Taft-Hartley amendments of 1947 are frequently described (even on some union websites) as a ban on “secondary boycotts,” this term does not appear in the law.

Nor does any other language in the NLRA prohibit unions from using non-coercive informational methods—such as handbilling, bannering, advertisements, and ballooning—to attack secondaries and to attempt to persuade customers and potential customers to boycott their products and services. The union does not have to hide its goal.

A 2011 decision of the National Labor Relations Board put the matter clearly:

“Union protest activity that is merely persuasive is lawful...even when the object of the activity is to induce the secondary to cease doing business with a primary employer.”

The union’s possible targets include suppliers, large customers, shippers, businesses owned by the company’s directors and trustees, subsidiaries, divisions of the same parent corporation, landlords, and the company’s law firm.

Some of these entities, such as subsidiaries and divisions, may qualify as “allies” of the employer, which labor law says can be picketed in the same way as the employer.

But most outside businesses are considered “neutrals”—entities that are not party to the dispute. Neutrals can claim insulation from some union tactics under the Taft-Hartley Act.

This law prohibits unions from engaging in actions that “threaten, coerce, or restrain” a neutral to force the neutral to “cease doing business” with a “primary” employer. The NLRB and the courts have consistently interpreted these words as prohibiting picketing and large demonstrations. To avoid running afoul of Taft Hartley, unions must confine themselves to non-confrontational tactics.

An example of a sharp-edged secondary boycott involved SEIU Local 399 in Los Angeles. The union needed a way to ramp up pressure on a cleaning contractor. The contractor’s principal customer was Delta Airlines. To bring Delta into the dispute, union members distributed handbills in airline terminals and in front of Delta’s downtown ticket office.

One side of the handbill said: “Please do not fly Delta Airlines. Delta Airlines unfair, does not provide AFL-CIO conditions of employment.” The other side criticized Delta’s safety record and warned, “It takes more than money to fly Delta. It takes nerve.”

Feeling the pressure, Delta filed charges at the NLRB claiming the campaign was illegal. But the board ruled that the union’s campaign was lawful.

Construction unions, such as the Carpenters, have pioneered innovative boycott tactics against secondaries. Two of these, bannering and ballooning, have recently been vindicated by the NLRB.

Bannering involves the fixed display of 20-foot cloth or vinyl signs on sidewalks near the secondary’s premises. Due to their size, banners can draw more attention than picket signs.

If they are held in a stationary position and are located several feet away from entrances, and no attempt is made to argue with customers or employees, the activity cannot be classified as picketing. Legends can include: “Labor Dispute: Please Don’t Do Business Here” or “Shame on (Name of Secondary): Labor Dispute.”

Along with the banners, union handbillers can distribute leaflets with sharp but truthful attacks on the secondary’s policies, products, and services. The name of the employer with whom the union has a primary contractual, organizing, or other dispute must be identified.

The union can send letters to the secondary promising to stop its activities if the secondary cuts its ties with the primary employer.

Ballooning, another tactic approved by the Labor Board, involves huge rat, skunk, or other animal-shaped helium balloons that are displayed in front of the secondary’s premises. Handbills explain that the rat is a symbol of an anti-union employer and that the targeted business is assisting the union’s employer in attacking workers’ living standards.

Carried out within the parameters of non-coercion, militant secondary boycott tactics should have a prominent place in every union toolbox.

Robert M. Schwartz is a labor lawyer and author of the forthcoming Just Cause: A Union Guide to Winning Discipline Cases.

A version of this article appeared in Labor Notes #399, June 2012. Don't miss an issue, subscribe today.
Related
How to Win NLRB Cases against Union-Busters »
Viewpoint: The NLRB is Underfunded and Understaffed—And That’s a Big Threat to the Current Organizing Wave »
How Starbucks Workers Won in Mesa »
The Hows, Whys, and Whats of ULP Strikes »
This Year, Let's Coordinate Our Contract Fights to Bargain for the Common Good »