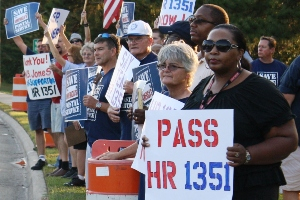 As Congress dallies, some postal workers and community activists are turning to civil disobedience to combat the sweeping cuts planned for the Postal Service. Union tops are sticking to a legislative strategy. Photo: Save USPS.

As Congress dallies, postal workers and community activists are turning to civil disobedience to combat the sweeping cuts planned for the Postal Service.

Ten postal worker and community activists in Portland, Oregon, were arrested May 24 when they occupied the city’s University Station post office, refusing to leave and blocking the closure of the office’s retail desk.

Nearly 100 supporters rallied outside as the activists inside held their ground, singing and holding banners proclaiming “Occupy the Post Office” and “No Closures! No Cuts!” Police hauled them out after an hour and a half.

The occupation was organized by members of Communities and Postal Workers United, a cross-union network of postal worker activists. Other groups active in the “Occupy the Post Office” coalition include Jobs with Justice, the Rural Organizing Project, and Occupy groups.

The arrests, the first in the fight to save the post office, mark an escalation in tactics that CPWU organizers hope will spread to communities across the country.

According to Jamie Partridge, an arrestee from Occupy Portland and a retired postal worker, the action was meant to press Postmaster General Patrick Donohoe to halt his announced cuts and closures, which could slow mail and cost thousands of jobs as soon as this summer.

“It’s Congress and the president who can fix postal finances, but our immediate target is the Postmaster General,” Partridge said.

Activists with the Rural Organizing Project have occupied rural post offices in Oregon, and community/labor coalitions against cuts have been active in New York, Baltimore, and rural Vermont.

The arrests come a month after the Senate passed a bill meant to provide relief to the financially struggling post office, a bill CPWU activists criticize for not going far enough.

Absent a fix from Congress, Donohoe’s plans for massive cuts to jobs and services will soon be underway.

The Senate’s bill would do little to chase away the albatross dragging on USPS finances: an obligation passed by Congress in 2006 that requires the postal service to pre-fund the health benefits of retirees up to 75 years in the future. This requirement, not shared by any other federal agency, costs the postal service a hefty $5.5 billion per year.

The bill aims to ease the burden by allowing the postal service to make payments over a longer period of time but would also slash 100,000 postal jobs, largely through buyouts.

If made law, the bill would make it harder for USPS to close small rural post offices and would preserve overnight delivery standards for three more years and Saturday delivery for two.

While some laud these provisions as victories—if enacted—there’s nothing to prevent the USPS from slashing standards after the protections expire. Indeed, postal managers have already said eliminating overnight delivery is one key strategy for cost savings in the near future.

Postal activists like Partridge, who’s on the Letter Carriers Branch 82 organizing committee, doubt the bill would do much to help. “It doesn’t actually take anything off the chopping block and it doesn’t fix the pre-funding issue,” he said.

Even leaders of the Postal Workers and the Letter Carriers criticized the bill as “flawed” and “deeply flawed” for allowing cuts and not doing enough to relieve the financial burden that Congress itself placed upon the USPS.

Of course, none of these provisions will become law until postal relief legislation passes in the House, which seems unlikely anytime soon.

That’s just as well, as the leading bill is one sponsored by California Republican Darrell Issa, who seeks to slash postal jobs and services into oblivion. Issa has refused to let a more favorable bill with broad support among House members come to a vote.

In the wake of Congress’s failure to pass timely relief legislation, Donohoe is moving ahead with major cuts.

Plans to slash hours at post offices and to close processing plants were announced just in time for expiration of a May 15 moratorium on cuts and closures.

On May 17, the Postal Service announced it would go forward with plans to close half of its 461 mail processing plants over the next two years. The first round of 48 closures will happen this summer. On the chopping block are the 28,000 jobs in those plants, positions represented by the Postal Workers.

The week before, USPS announced it would reduce hours at 13,000 rural post offices across the country. There are 31,500 post offices nationwide.

In the rural locations, full-time postmasters will be replaced with part-timers. The USPS is pushing early retirement for 21,000 postmasters. It’s not yet clear how many other jobs will be lost.

The newly announced cuts are a departure from the Postal Service’s original plan. Last July, Donohoe said he would close 3,700 rural, urban, and suburban offices that the USPS identified as low-revenue.

In a May 9 press release, Donohoe said the switch from closures to shorter hours was made in response to public opposition and that the agency would not shutter any offices “without having provided a viable solution.”

“This is no victory at all. It doesn’t make a difference if you’re closing 3,700 or cutting hours at 13,000—you’re still cutting service,” says Tom Dodge, a truck driver at the Baltimore mail processing center and an organizer with Communities and Postal Workers United.

At most offices, service cuts will come in the form of slashing operating hours. Many retail desks could see their open hours whittled down to as little as two a day. Such drastic cuts will effectively render post offices inaccessible to “anybody who has to work for a living,” Partridge said.

Towns with offices on the cuts list also have the option of replacing the office with a “village post office,” a retail desk located within a private business such as a gas station or Walmart. Village post offices can sell stamps and ship flat-rate packages, but can’t handle weighing packages, shipping express or registered mail, or selling money orders.

The desks are staffed not by unionized USPS workers but by non-union employees of the business where they’re located.

Dodge knows firsthand how problematic these “consolidations” are. In November, the Frederick, Maryland, plant was closed and its mail sent to the Baltimore plant where Dodge works, 50 miles away.

The facility was so ill-prepared to accommodate the deluge of mail from Frederick that soon 22 semi trucks full of mail were lined up outside waiting to be unloaded.

Mail has been delayed, sometimes comically so. Customers reported receiving circulars for Thanksgiving sales as late as February. Even after mail was diverted to Virginia and D.C. facilities, postal workers received reports of people receiving coupons weeks after they’d expired.

As Congress stalls in fixing the financial mess it created, activists are targeting Donohoe, who has ultimate authority to stop the closures and cuts. Some hope actions like the Portland occupation may pressure him into halting the cuts, while others are calling for his ouster.

Activists believe that Donohoe’s cuts, by increasing customer dissatisfaction with the Postal Service, fit in to his master plan to shrink it to a fraction of its current self.

A version of this article appeared in Labor Notes #399, June 2012. Don't miss an issue, subscribe today.
Related
How We Began To Bring the Mail Back »
Viewpoint: Support Veterans by Defending, Not Defunding, Public Sector Jobs at the Post Office and the V.A. »
Viewpoint: Federal Workers Need a Functioning Federal Labor Board »
Florida Letter Carriers Won Back Our Sunday Breaks with Direct Action »
St. Louis Boeing Plant Workers to Strike »

Just because Issa has made considerable profits as a business owner doesn’t qualify him to dictate how the Post Office should be run particularly when his solutions promoted as saving the Post Office, if enacted, would do the exact opposite.
If Issa wants to save the USPS he should look at what expenses can be deleted without disrupting the service.
#1. The Postal Accountable and Enhancement Act needs to be rescinded. In 2006 the PAEA ,signed by Bush, mandated that the USPS fund 75 years of retiree health benefits in 10. As the USPS was solvent before the PAEA (HR6407) was passed it stands to reason that the USPS would once again become solvent if this law was rescinded.
#2. Overpayments the USPS has made to the Civil Service Retirement Service should be returned.
#3. Overpayments the USPS made to FERS need to be retrieved.
#4. Charge more for delivering UPS parcels that UPS has the Post Office deliver to places they don’t.
#5. Adjust the ratio of managers to workers .
But Issa, in HR2309 hasn’t proposed that any of these things .
Issa’s solution is to cut the workforce by at least 100,000. Issa’s solution is to weaken the unions, so that Postal Workers’ wages and benefits would depend on a separate board when a contract wasn’t agreed upon by the USPS and a union.
This is a case where Issa’s cure would cause the death of the USPS as a public service and have it revived as a business with lower paid workers, higher rates and less service.

S1789, sponsored by Lieberman, would cut 100,000 jobs with the USPS when we don't need to have more unemployed workers. S1789 would decrease compensation for injured workers and end it for those over 65, when we don't need to take away compensation or lower compensation for injured workers.It would weaken the unions which promote a "living wage" at a time when we don't need to add more people to the "working poor", S1789 would close smaller post offices (some have already closed),and slow mail delivery by closing 200+ distribution centers.
In 2006 Congress voted to have the USPS fund 75 years of retiree health benefits in 10 amounting to 5.5 Billion a year.
Saddled with funding 5.5 Billion a year that had nothing to do with mail delivery, the USPS could no longer have it's revenue =costs as it had done until 2005.
If this bill is passed or HR2309 the USPS will end up virtually privatized with lower wages and benefits for its’workers,a scaled down and overworked workforce, more mail services contracted out, less services for the public including curbside service in place of home delivery.

Posted on Face Books of over 425 Members of the House