Celebrating May Day, in New and Old Ways 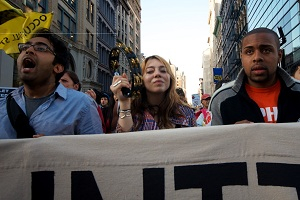 Would May Day see a revival of the national Occupy movement, allied with labor and immigrants? Results may vary. Photo: Erin McCanner.

For this year’s May Day, the Occupy movement called for the holiday to be a “general strike," or as they described it: no work, no school, no housework, don’t bank, don’t buy.

Occupy May Day’s tagline, “A Day Without the 99%,” likened itself to the 2006 immigrant marches where millions of Latinos marched in cities across the United States May 1 in their own kind of general strike.

Given the attack on the Occupy camps last fall, the assault on labor, and the spread of Arizona-style anti-immigrant laws, what would happen this May Day was an open question. Would this be the revival of the national Occupy movement, allied with labor and immigrants?

Reports from cities around the U.S. tell us that the results are mixed. In Baltimore, Occupy May Day brought together a small but spirited march and rally of about 300, with a presence of postal workers fighting closures, African American groups protesting gentrification, and UNITE HERE locals locked in contract fights.

Tuesday's actions marked attempts to rekindle the spirit that carried Occupy through the fall. “Occupy never really recovered since being kicked out of the park," said organizer Christopher Rotondo of Direct Action for Rights and Equality, a community organization in Providence, Rhode Island. That city's march attracted about 300 as well. "May Day more showed us who was the backbone of the working community,” Rotondo said.

Anti-foreclosure protests were the center of Providence’s May Day, with representation from DARE and the Olneyville Neighborhood Association. Also included was a showing from Fuerza Laboral (an immigrant workers’ organization) and IBEW locals, whose difficult negotiations with Verizon are ongoing.

The major centers of action were on East and West Coasts as thousands gathered in New York City and Oakland, where "99% pickets," rallies, and marches confronted everything from tuition hikes to weakened rent control to employers standing in the way of immigrant worker organizing. Scattered arrests were reported in both cities. Unionized airport employees in Los Angeles briefly shut down Century City Boulevard outside the city's airport, slowing traffic and delaying flights as 10 protesters were arrested.

In Wisconsin, the months of protests last year against Governor Scott Walker's attack on public workers boosted 2011 May Day demonstrations in Madison and Milwaukee. This year the wave seemed to have ebbed.

In Milwaukee, Voces de la Frontera, a worker center and immigrants’ rights organization, just about singlehandedly organized May Day, with a platform calling for an end to deportations, defense of voting rights, and passage of the DREAM Act, which would allow immigrants brought to the U.S. as children to access higher education. Speakers demanded a restoration of union rights, health care, and public education funds slashed by Governor Scott Walker.

The march started 3,000 strong, picking people up along its three-mile route, with nearly no presence from organized labor. By comparison, last year’s march was more than 25,000 strong. In Madison, a rally at the state Capitol of roughly 400 people followed a similar platform. Demonstrators emphasized that whether or not Walker is removed in a June recall vote, the workers' movement should stay independent.

Chicago’s march, “A Day for the 99%,” represented a meeting of the immigrants’ rights movement, which has been the core of May Day protests since 2006, and the Occupy movement. Together they brought 4,000 demonstrators. May Day Chicago marched past Haymarket Square, site of the first May Day in 1886.

Some unions marked the day with traditional tactics. Machinists at Caterpillar in Joliet, Illinois, went on strike at 12:01 a.m. Caterpillar is demanding wage freezes and increased contributions to worker health care plans.

About 4,500 nurses and technicians in the Sutter health care chain in the Bay Area staged a one-day walkout, the third short strike organized by the California Nurses Association against the chain.

Worse yet, Koch says the chain is cutting services—like free breast exams—and closing units and entire hospitals it deems not profitable enough. One hospital on the watch list is in San Leandro, bordering Oakland. Residents of Oakland account for 60 percent of the hospital's 25,000 visits a year. Many of the patients are uninsured or rely on state insurance, which offers too slim margins for Sutter.

The chain has booked a $4 billion surplus since 2007, and pays its top 20 executives more than a million dollars each annually. Still, Sutter is pursuing service cuts and concession demands relentlessly.

"You don't want to encourage nurses to work sick, and everyone deserves affordable health care," said CNA's Liz Jacobs. "These are bottom-line issues for health care workers, but beyond that, nurses feel like they're holding the line for the community."

As he watched a Slovakian dance troupe entertain the picket line at the Sutter Alta Bates hospital, near Berkeley, Koch said the strike made perfect sense for May Day.

"Whether you're a dishwasher or a nurse, we all deserve respect for what we do," he said.

Mischa Gaus contributed to this article.

Related
Lessons from Labor History for Organizing Amazon »
Inside the Alabama Amazon Union Drive: An Interview with the Lead Organizer »
How We Turned Bargaining Around at Law360 »
China: Leader of Delivery Riders Alliance Detained, Solidarity Movement Repressed »
The BAmazon Loss and the Road Ahead »