Everything You Were Afraid To Ask About Lockouts 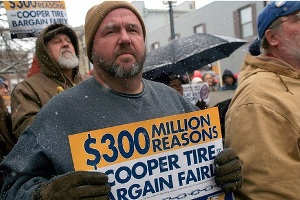 Lockouts seem to be everywhere. At Cooper Tire in Ohio, sugar beet plants in North Dakota, the New York City Opera, the National Football League, and Caterpillar’s locomotive plant in Ontario, management has used the tactic to try to force outrageous concessions.

A typical scenario: An employer presents a draconian final offer. The union refuses to sign a contract with the new terms, and the employer locks the workers out until they change their minds.

But some unionists see a silver lining. If workers are going to have to take valiant measures to resist an abusive contract, triggering a lockout may put them in a better position than declaring a strike.

A lockout has four advantages over a strike: 1) workers cannot be permanently replaced, 2) they can often collect unemployment benefits, 3) the public will be more sympathetic, and 4) the possibility of getting back pay through NLRB proceedings may put decisive pressure on the employer.

Q. When can an employer declare a lockout?

A. In the early years of the National Labor Relations Act, lockouts were allowed only for “defensive” purposes—to prevent sabotage by the union, for example. But in 1965, the U.S. Supreme Court said an employer could lock out employees “for the sole purpose of bringing economic pressure to bear in support of his legitimate economic position.”

An employer can declare a lockout when the contract expires, in reaction to a union’s “inside campaign,” or when a union offers to return from a strike. An impasse in negotiations is not a prerequisite.

Q. Can an employer hire permanent replacements during a lockout?

A. No. Although an employer can continue operations with temporary employees and workers from other facilities, it cannot hire permanent replacements. All unit employees must be allowed to return to their jobs when the lockout ends.

Q. If a striking union offers to return to work under the terms of the expired contract, and the employer declares a lockout to force the union to agree to its final offer, can permanent replacements who were hired during the strike and union members who crossed the picket line continue working?

A. No. A lockout must include all employees in the bargaining unit as well as any permanent striker replacements. Employees cannot be allowed to work as a reward for scabbing.

A. In most cases, yes. Forty-one states pay benefits during lockouts. Seven pay benefits if the employer maintains full or nearly full operations. Thirty-four pay benefits even if operations are curtailed.

Q. When is a lockout unlawful?

A. An employer may declare a lockout only to force agreement to a legitimate bargaining position. The commission of unfair labor practices, either before or during the lockout, can make a lockout unlawful.

Q. What kinds of employer ULPs make a lockout unlawful?

A. The most common is declaring a bargaining impasse prematurely (i.e., before the parties have reached a good-faith deadlock on the entire contract).

Others include insistence on a “permissive” subject of bargaining (such as the union withdrawing a lawsuit or an unfair labor practice charge); failure to provide information to the union on a central issue in dispute; allowing line-crossers or permanent replacements to work; hiring new employees on a permanent basis; dealing directly with individual employees; or simply refusing to bargain.

Q. What is the penalty for conducting an unlawful lockout?

A. The usual NLRB remedy is reinstatement of all unit employees, with back pay from the date the employer declared the lockout or from the date it became unlawful.

Q. Can a union ever prevail during a lockout?

A. Yes, if workers picket aggressively, form alliances with other unions, build public pressure, pursue local and national boycott campaigns, and collect unemployment benefits (which the employer will have to pay back to the state fund).

The union should warn that if the NLRB rules in favor of the union’s ULP charges, the employer may be liable for an immense amount of back wages.

Even if the union is forced to accept the employer’s terms, it should be able to get all its members back to work—a result not often seen following an extended strike.

Robert M. Schwartz is a union attorney and the author of Strikes, Picketing and Inside Campaigns. He will give a workshop at the May 4-6 Labor Notes Conference.

A version of this article appeared in Labor Notes #397, April 2012. Don't miss an issue, subscribe today.
Related
Management Rights: A Pitfall When Negotiating Your First Contract »
Viewpoints: How Academic Workers’ Leverage Can Grow in a Long-Haul Strike »
Every Union Contract Right Now Should Be the Best Ever »
Could We See a Rail Strike? »
Undaunted by Fines, Massachusetts Teachers Defy Strike Ban »