What Wisconsin Will Recall 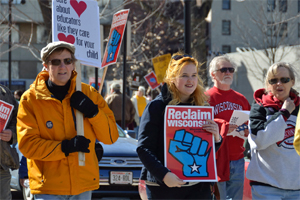 In the year since Wisconsin's uprising, outrage has been compressed into a single word: recall. But some are discussing what next, if the recalls are successful. Will they be enough to take Wisconsin forward? Photo: Sue Ruggles.

In the year since the uprising against Governor Scott Walker’s attacks on public unions, employees, and services, the outrage of Wisconsin’s citizens has been compressed into a single word: recall. But some are discussing what next, if the recalls are successful. Will they be enough to take Wisconsin forward?

While spring bursts into Wisconsin, things look bleak for Walker. After investigations of illegal activity in his administration during his 2002-2008 service as Milwaukee county executive, including 15 felony charges against former staff, Walker has opened a legal defense fund in his name, something elected officials may do only if they are being investigated for a violation of law. While the specifics of the “John Doe” case are not yet public, Walker’s opening of the defense fund suggests he is implicated in the charges.

It doesn’t look much better for Walker’s collaborators. Last week Republican Senator Pam Galloway of Wausau resigned, preempting her upcoming recall election and surrendering the Republican majority in the Senate. The Senate is now split 16-16 between the parties.

An independent judicial oversight body filed a complaint about Walker supporter and Supreme Court Justice David Prosser’s outburst last summer. He choked an opposing justice during heated discussion about the constitutionality of Walker’s law to strip collective bargaining rights. A panel of appeals judges will file their recommendations, ranging from reprimand to replace, with the Wisconsin Supreme Court.

Feet on the Ground

While political elites fight these battles on an elevated stage, the people of Wisconsin continue to organize with their feet on the ground. A large coalition of activists has worked, without the initial support of the Democratic Party, to launch recalls of four Republican senators and key Walker allies. Fatigued by only moderate success in last summer’s Senate recalls, Democratic leaders seemed wary about attempting recalls again.

But citizens in these districts were not so easily discouraged. A group of constituents from the Dodge County area, for example, didn’t agree with Senate Majority Leader Scott Fitzgerald’s claims that his district was too Republican for him to be recalled. A local area photographer and writer, Lori Compas, gathered friends and neighbors. Not only did she successfully collect enough petition signatures to trigger a recall, she has decided to take on Fitzgerald in the election herself.

In response to a lawsuit filed by the immigrant rights group Voces de la Frontera, the League of Women Voters, and the Milwaukee chapter of the NAACP, a circuit judge issued a permanent injunction against Walker’s voter ID law, declaring suppression of the vote a primary threat to democracy. A movement led by Native American rights activists and environmentalists won a key fight against an aggressive mining bill that would destroy sacred land in northern Wisconsin.

These fights and victories are among the many ways Wisconsin’s activists and community members continue to struggle for justice.

For unions, recalling Walker is fundamental for long-term survival. His Act 10 eliminated collective bargaining, removed fair-share dues deductions, and required 51 percent of eligible members in every bargaining unit approve a union’s recertification every year—a major task in itself. The law threatens the basic sustenance of unions.

Thus far the challengers to Walker, to face off in a Democratic primary May 8, are Kathleen Falk, former county executive of Dane County (Madison); Kathleen Vinehout, a state senator; and Secretary of State Doug LaFollette. Two others are seriously considering running: Tom Barrett, mayor of Milwaukee and Walker’s opponent in the 2010 governor’s race, and Peter Barca, minority leader in the state assembly. The recall election will be June 5.

Falk earned the early endorsement of the state’s major unions. Of the current candidates, she has issued the strongest statements about the need to restore collective bargaining rights. Other candidates have not made pledges to restore collective bargaining, and have in fact distanced themselves from pro-union stances, in what they see as an attempt to increase their statewide electability—which places increased strain on the relationship between unions and Democrats.

Though Vinehout’s background as a rural Wisconsin farmer makes her appealing to more moderate voters, she has a progressive streak, including a fierce defense of the state’s public health care plan. Barrett, who has already lost in a statewide election to Walker once, is a weak supporter of labor at best, and will likely build his campaign on opposition to unions. This mirrors Walker’s own efforts to paint Falk as an undemocratic stooge of big labor. Democrats are in the wary position of both needing unions for support and needing distance from unions for widespread appeal.

The “union issue” is a critical one: how much is the recall about unions? And, more broadly, how much is the recall about justice for the people of Wisconsin? Removing Walker is necessary for the basic survival of workers, but removing him does not in itself guarantee improved conditions. After all, Democratic Governor Jim Doyle, Walker’s predecessor, imposed plenty of his own cuts to workers and public services.

To Endorse, or Not

One union, the 2,700-member Teaching Assistants’ Association, Local 3220 AFT at the University of Wisconsin, is hotly debating this question. At TAA’s membership meeting February 23, members voted to adopt a set of criteria necessary to endorse a recall candidate. TAA would not endorse any candidate who doesn’t state an intent to repeal all of Act 10—which would mean not only reinstating collective bargaining rights but also restoring cuts to wages and benefits (about a 9 percent pay cut) and cuts to public services. These cuts include removing 53,000 people from BadgerCare, the state health care program, and $1.6 billion in cuts to public education.

While Falk has declared she will restore collective bargaining rights, she is less aggressive about restoring the cuts to workers, calling on a need for “shared sacrifice.” Yet Falk has issued no call for closing corporate tax breaks, instituting a millionaires tax, or other means to create more evenly distributed wealth. She has bragged about bargaining concessions from her employees when she was Dane county executive, including at a meeting with TAA members. Under the recently passed criteria, the union could not endorse her campaign or any other’s.

This poses a serious strategic question: Does TAA stand for its greater vision or does it bend to the urgency of the current situation? The public feeling about the recall is so strong that many TAA members want to abandon any criteria for endorsement in order to support the pro-union candidate. The resolution will be re-voted on.

The debate has sparked discussion among the ranks of other unions who are concerned about the early endorsement of Falk. While the need to remove Walker cannot be overstated, many are concerned that recall alone is not enough. Removing him does not guarantee the restoration—much less expansion—of public services funding. Restoring cuts to wages, benefits, and public services may seem like demanding the impossible, but many TAA members argue that, after all, these funding levels existed just one year ago.

Though “recall” has rhetorical power, it doesn’t adequately describe the outrage at injustice that spurred last year’s mobilization, and it cannot sustain the energy, creativity, and solidarity that fueled the fight. Nor does it capture the demands for alternative solutions: closing Wisconsin’s corporate tax loopholes, increasing jobs, expanding public education and affordable health care, and bringing back the high-speed rail plan thwarted by Walker.

Pushing the envelope is a particular strength of the TAA, which led the initial charge to occupy the Capitol in February of last year. Members want to push candidates to reconsider their priorities, reminding the people of Wisconsin it’s not simply who we are fighting against but what we are fighting for.

Update: When TAA members revisited their resolution on March 20, they voted to rescind it—but also voted down a proposal to endorse Falk.

Eleni Schirmer is a member of the Teaching Assistants Association.

Not ONE mention in this assessment of the ONLY way labor and allies are going to retake the initiative and push back against the bosses and their kept politicians, and that's through ongoing mass rank and file mobilization and occupation in Wisconsin streets and spaces. The electoral "recall" effort is what sank the movement that could have defeated the bosses' assault. It was engineered by Democratic Party sycophants within the labor leadership, precisely in order to derail those mass actions by rank and file workers that potentially threatened their entire political edifice, with all of its electoral illusions. What has it gotten Wisconsin (and U.S. workers)? Nuttin! But, what did the occupation of the capitol bring us? The Occupy movement and an increase in struggle, with a number of victories, across the land. Wake up!

To Endorse or Not To Endorse - What a stupid question. Of course you should endorse and work for the strongest Pro-Union candidate among those running in Democratic Primary in May. Then you should work for whom ever wins the Democratic primary in the June general election against Walker. A win for Walker will only embolden the right wing anti-Union forces in Wisconsin and across the country and help elect Romney in the Fall. Building a movement for progressive change with these fascists in power will be that much more difficult.